Further to that, a small modification needs to be made to the applied MR sequence such that protocol information is written to a specific location. By now, all the sequences commonly used at the DCCN contain this modification.

Recent Siemens software versions (VB17) include an option for realtime export of DICOM images, however it seems there is considerable jitter in the arrival of those files. Alternatively, there is an example of how to export data directly from within an ICE component. However, that piece of code would run on the imager, which is not directly connected to the outside world network. It was therefore decided to build a custom solution based on accessing files on the scanner host.

There are essentially two steps involved for using this mechanis

If the connection could be made, the color of the input fields will switch to green. You can now start scanning and have a look at the gui_streamer window to monitor the number of scans etc. 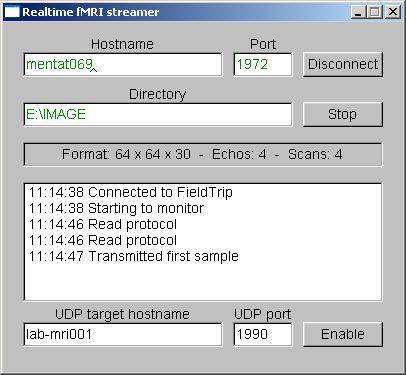 The input fields at the bottom of the dialog window are for setting up an extra mechanism that sends a simple “RESET” message as a UDP packet to the given address, each time a new protocol is read. This is only relevant for realtime fMRI experiments and is intended to help with synchronising the experiment. Usually this would be used in conjunction with a tool that runs on the presentation machine, and that turns incoming TTL pulses (indicating the start of a new scan) into FieldTrip buffer events. Listening for “RESET” messages allows this tool to reset its internal sample counter, so that the events it sends correctly correspond to the scans that are written to the buffer from the streaming tool or the pipeline.

The directory “fieldtrip/realtime/online_mri” contains some functions that are useful for realtime processing of fMRI data. In the MRI lab of the FC Donders centre, we use the function ft_omri_quality to monitor head movement and signal quality. In order to start this, e.g., on the lab machine “lab-mri004” close to the Avanto scanner, simply click on the icon labeled “fMRI quality control”. This will first fire up a FieldTrip buffer server on port 1972, and subsequently a MATLAB session that automatically runs ft_omri_quality. Once the buffer server has started (visible in a new terminal window), you can start the gui_streamer on the scanner host and connect to the address (in the Donders centre, a link in the start menu of the scanner host starts the tool with the right hostname:port combination).

Everytime you start a new sequence on the scanner, the ft_omri_quality script will detect this, and will use the first scan of each sequence as the template for aligning all subsequent images to. You can choose to skip any number of (“dummy”) samples at the beginning by running

Please see the documentation of ft_omri_quality for more options.

For realtime fMRI experiments (e.g., involving neurofeedback), it is sometimes easier to separate standard preprocessing steps from more specialised analysis. This can easily achieved by using two FieldTrip buffers and MATLAB for the preprocessing. We provide a script ft_omri_pipeline that reads unprocessed scans from one buffer, carries out motion correction and slice-time correction, and writes the resulting volumes to a second buffer, which can then be read from by another script for further analysis. 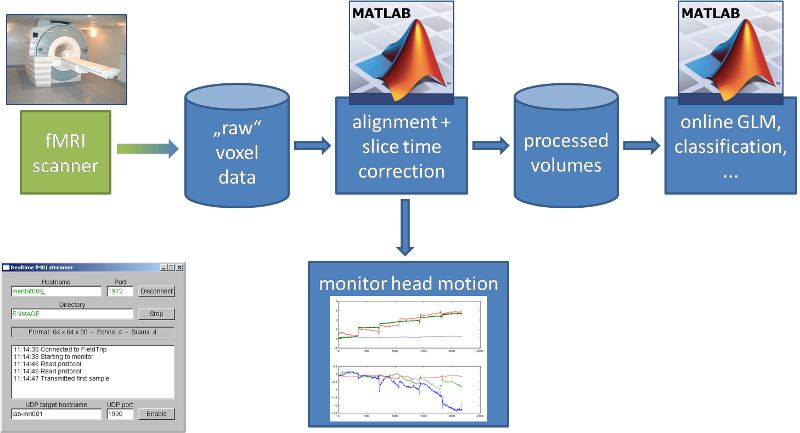 Apart from motion correction and other pre-processing steps, it is necessary to have a good handle on the timing on the experiment. In contrast to EEG or MEG data, fMRI data arrives in the buffer at a much slower rate (typically at a sampling rate of 0.5 Hz). Moreover, there is a lag of more than 1 TR between the time when the acquisition of a scan starts (marked by a TTL pulse), and the time the data is available. The former is what you need to link your stimulus presentation and analysis to, and you can do so by turning each TTL pulse into a FieldTrip buffer event, for which you then need to poll repeatedly.

With the current Siemens scanner software (VB17A), a new file “E:\IMAGE\xx-yyyy\zzzzzzz.PixelData” is created on the “E:" drive of the host computer (the Windows box the scanner is operated from) immediately after each scan. This file contains pixel data as unsigned 16-bit integers, where different slices show up as tiles of a mosaic. The mosaic seems to be always square, and blank tiles are appended if the number of slices is smaller than the number of tiles in the mosaic.

Example: The MR sequence is set up to scan N=32 slices with readout resolution R=64 pixels and phase resolution P=48 pixels. In this case, the mosaic will contain 6x6 tiles with 4 empty tiles marked by “–” and slices ordered as follow

Within the FieldTrip buffer, each scan is represented as ONE sample with RxPxN channels, with data ordering as in MATLAB, that is, the pixel data is reshaped such that slices (and their rows) are contiguous in memory, and empty tiles are dropped. For the above example, we would have 64x48x32 = 98304 “channels”. The data format is kept as INT16_T.

In order to react efficiently to a new scan, which shows up as a file with name and location not known in advance (apart from its suffix), the Windows API function ReadDirectoryChangesW is used to monitor “E:\IMAGE” and all of its subdirectories. Whenever a new file is created or modified anywhere in that tree, a Windows event is triggered and the corresponding path is made available. This mechanism is wrapped up in the C++ class “FolderWatcher”.

A second C++ class, “PixelDataGrabber”, encapsulates the actual real-time fMRI acquisition mechanism based on the “FolderWatcher” and client-side code of the FieldTrip buffer. Detailed Doxygen-style documentation is provided in “PixelDataGrabber.h”, and developers can also look at “pixeldata_to_remote_buffer.cc” for a simple example of using this class in a command-line application. A slightly more complex program is compiled from “gui_streamer.cc”, which combines the PixelDataGrabber with a small GUI written with FLTK. This program provides a few buttons for starting and stopping to monitor for new files, and to connect to/disconnect from a FieldTrip buffer (see above).

How does the “PixelDataGrabber” determine the number of slices and their dimensions? For this to work, the best way is to modify the MR sequence by adding

to the function “fSeqCheck” in the sequence code, which is executed once before the first scan. This will dump the complete protocol information to the specified location. With the “PixelDataGrabber” listening for files in “E:\image”, it will note this and immediately parse the new protocol. The information written to that file is the same that is contained in one of the private tags of the DICOM headers, which the scanner writes using the normal (offline) mechanisms. The filename “mrprot.txt” is currently hard-coded in both the “PixelDataGrabber” and the standard sequences used at the DCCN.

If you run an unmodified MR sequence that does not dump the information, you can try to create your own “mrprot.txt” and place it in “E:\image” before running the scans. In this case, the “PixelDataGrabber” will read that file when the first scan arrives. In case the “PixelDataGrabber” encounters a mismatch between protocol specifications and the size of the “.PixelData” files, it will report an error and not write the sample. The most important ingredients for a hand-made protocol file are shown in the following example:

There are many more variables that the “PixelDataGrabber” will react to, but describing this here would be too much detail.

“Siemensap”, a plain C library in “fieldtrip/realtime/src/acquisition/siemens” provides some functions and datatypes to parse the ASCII format Siemens protocol data into a list or tree of key/value items. Currently supported value types are strings, long integers, and double precision numbers. Field types are determined automatically to a large extend (e.g., a dot in a number implies a double precision value), but some special rules are added. For example, a field name that starts with “d” will always be parsed as a double precision value, even if the value given in ASCII form looks like an integer. Please see siemensap.h for Doxygen-style documentation of the API.

The same C library is also used within the sap2matlab MEX file for decoding the ASCII protocol into a MATLAB data structure. However, this gets automatically called in ft_read_header, so users won’t need to worry if they stick to the usual FieldTrip functions.

We provide a simple “Makefile” for the MinGW compiler on Windows or GCC on other platforms. Please go to the “realtime/datasource/siemens” directory and type “make” or “mingw32-make”. You will need to have the FLTK library installed for your platform. Note that you also might need to compile the buffer library first.

You can use the MATLAB function ft_realtime_fmriproxy, which emulates an fMRI acquisition system by writing volumes in a cycle of about 2 seconds. The data is simulated on the fly.

Alternatively, you can use ft_realtime_dicomproxy, which emulates an fMRI acquisition system by reading a series of DICOM files from disk.