This page describes the interface between the Jinga-Hi JAGA16 device and the FieldTrip buffer.

The Jinga-Hi JAGA16 is a miniaturised stand-alone device includes amplifier, digitizer, signal processor and transmitter. The device has 16 channels. Although the JAGA16 has been primarily designed for electrophysiological recordings (spikes and LFPs) in small animals, its specifications also make it very applicable to wireless EEG-BCI systems.

The packaged version that is depicted above includes a micro-USB interface at the side that can be used to power the device, although for normal operation it should be battery powered. Below is the device (wrapped in protective foil) besides a 500mAh battery. 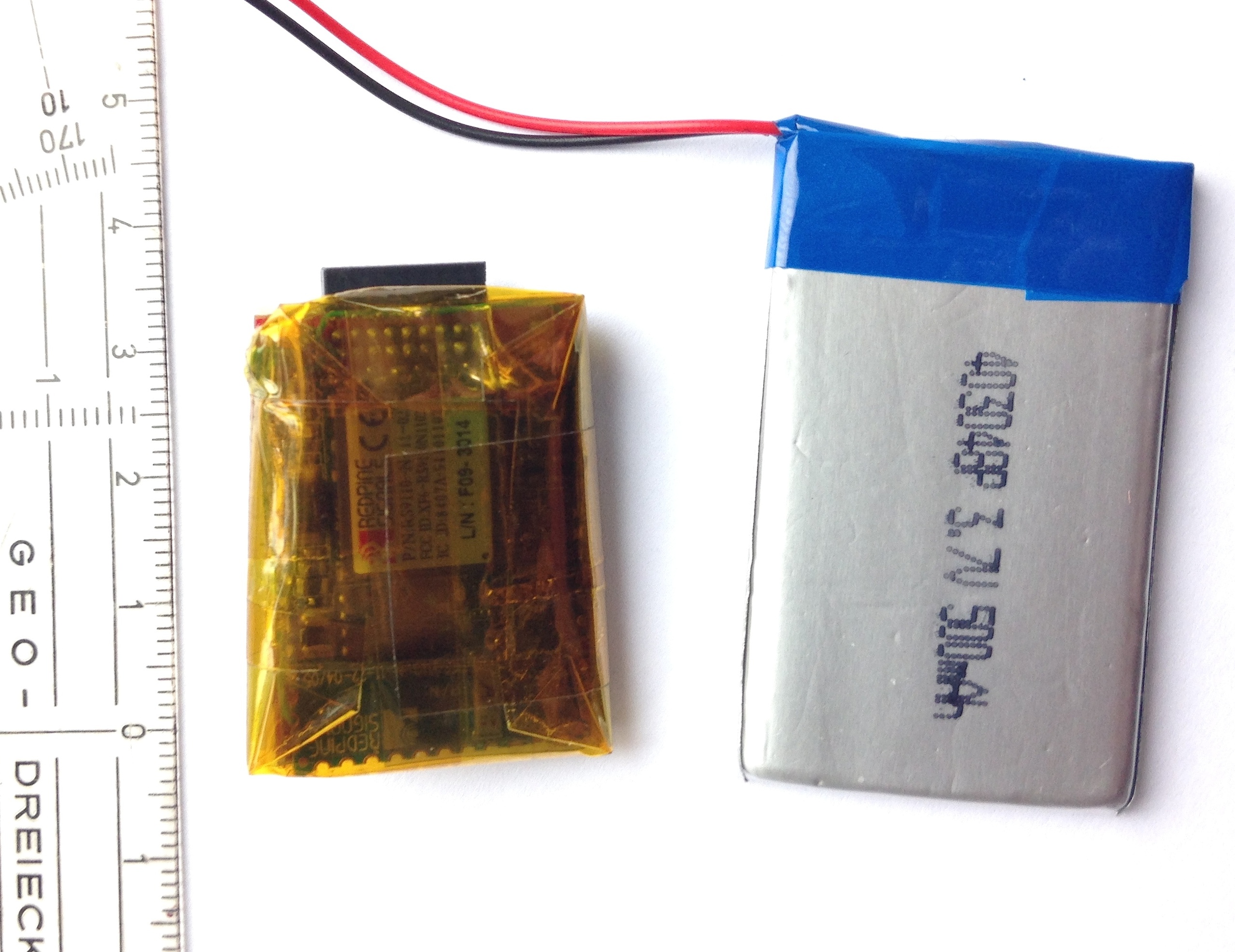 Jinga-Hi releases MATLAB (mex-based) and Python code to interface with the device. Since the device dumps the data in a well-defined format over a UDP connection, it is not hard to implement your own software to access the data.

The data files created by Jinga-hi software can also be read using ft_read_header and ft_read_data for offline analysis.

The MATLAB implementation is mainly for educational and testing purposes. For proper real-time analyses we recommend you to use the standalone interface, which is faster and requires less system resources.

The JAGA16 device streams the data over UDP network connection. The ft_realtime_jaga16proxy function (part of the realtime module in FieldTrip) sets up a UDP server that listens to port 55000and writes all data it receives to a FieldTrip buffer. The FieldTrip buffer is a multi-threaded and network transparent buffer that allows data to be streamed to it, while at the same time allowing another MATLAB session on the same or another computer to read data from the buffer for analysis.

Subsequently in another MATLAB session you can read from the FieldTrip buffer using the ft_read_header, ft_read_data and ft_read_event functions by specifying %%’buffer://hostname:port’%% as the filename to the reading functions, e.g.

The UDP network interface in MATLAB is implemented in the freely available TCP/UDP/IP toolbox. You should download this toolbox and add it to your MATLAB path if you want to use the ft_realtime_jaga16proxy function.

Instead of ft_realtime_jaga16proxy and MATLAB, you can use ** jaga2ft** to transport data from the UDP network connection to a FieldTrip buffer. jaga2ft is written in C and takes 2 optional command line arguments

For example, if you want to stream the data to a remote buffer on mentat205:1972, you would type

For spawning a local FieldTrip buffer within ** jaga2ft** at port 1234, you would use a dash (-) instead of the second hostname and write

On the command line, change to the “realtime/src/acquisition/jaga” directory and type “make”. Note that you might need to compile the buffer library first.