This example script demonstrates the analysis of data that is shared by Sujin Bak, Jinwoo Park, Jaeyoung Shin, and Jichai Jeong: Open Access fNIRS Dataset for Classification of Unilateral Finger- and Foot-Tapping.

The following links point to the shared data, to the PDF manuscript that explains the shared data, and to a GitHub repository from one of the authors that contains some example analyses on the data.

The data includes the concentration changes of oxygenated/reduced hemoglobin ∆HbO/HbR, trigger information, and fNIRS channel information. The recordings were done for 30 subjects that were performing a finger- and foot-tapping task.

The data were recorded by a three-wavelength continuous-time multi-channel fNIRS system (LIGHTNIRS, Shimadzu, Kyoto, Japan) consisting of eight light sources (Tx) and eight detectors (Rx). Four each of Tx and Rx were placed around C3 on the left hemisphere, and the rest were placed around C4 on the right hemisphere.

The temporal structure of each trial is

Exploring the MATLAB files that hold the NIRS data

The data is shared by the authors in the form of MATLAB files. Each file contains a bunch of separate variables, you can load it like this to represent it as a structure:

Convering the MATLAB structure to a FieldTrip raw data structure

Since the data is not stored on disk in a dataformat that FieldTrip can directly read, we will circumvent the FieldTrip reading functions as outlined in this frequenly asked question.

We start with constructing a MATLAB data structure according to ft_datatype_raw, as if it were produced by ft_preprocessing.

Convert the optode montage to a layout for plotting

In FieldTrip we can have a detailled description of the NIRS optode placement and how optodes are combined to form channels. However, in this dataset this information is not complete and we cannot make a complete opto structure.

This is how far we can get

But this is not a complete description of the channel and sensor information according to ft_dataype_sens. However, a full sensor definitioon is also not required: the opical densities have already been converted in HbO and HbR prior to sharing, so we only care about channel positions for plotting.

For the plotting of channel level data (see also this tutorial) we need a 2D layout. That is explained in detail in this tutorial. If the opto definition had included 2D or 3D channel positions, then we could have used ft_prepare_layout but now we will manually construct the layout structure.

I don’t think that the 41st position refers to an actual channel, so let’s remove that.

We can plot the layout using ft_plot_layout and inspect it in detail. That is something I have done multiple times, going back and forth in the script to ensure that my interpretation of the mnt field matches the data. 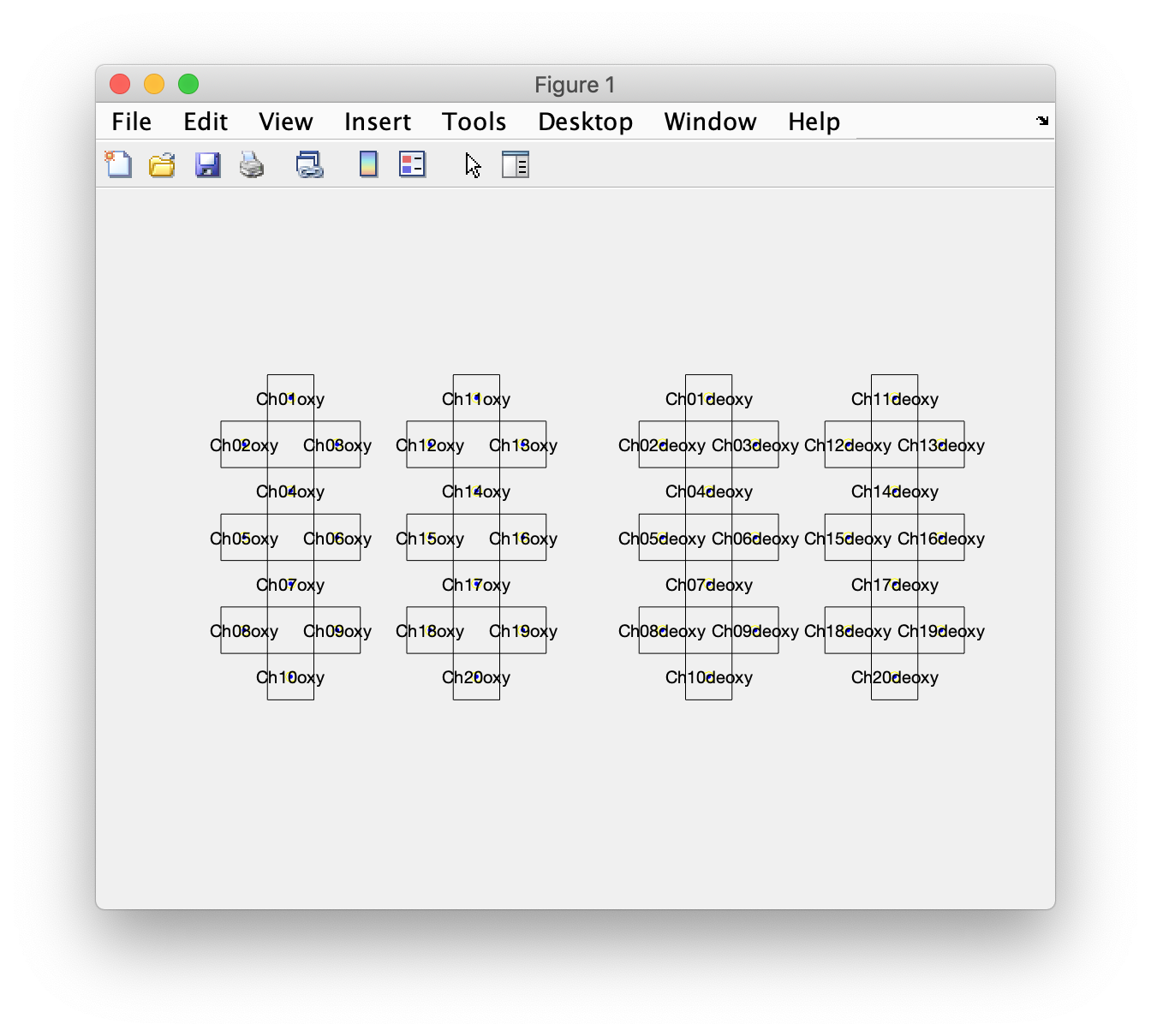 To improve the plotting of topographies, we can also make an outline and mask. The outline comproses extra lines that are added to the figure, often we include a circle (representing the head) with a triangle at the top (representing the nose). The mask comprises a series of polygons that are used in topographic interpolation and masking the interpolated data that is outside the head, but also by masking the interpolated data that is in between the grid on the left and right hemisphere. This will become more clear at the end of this example script. 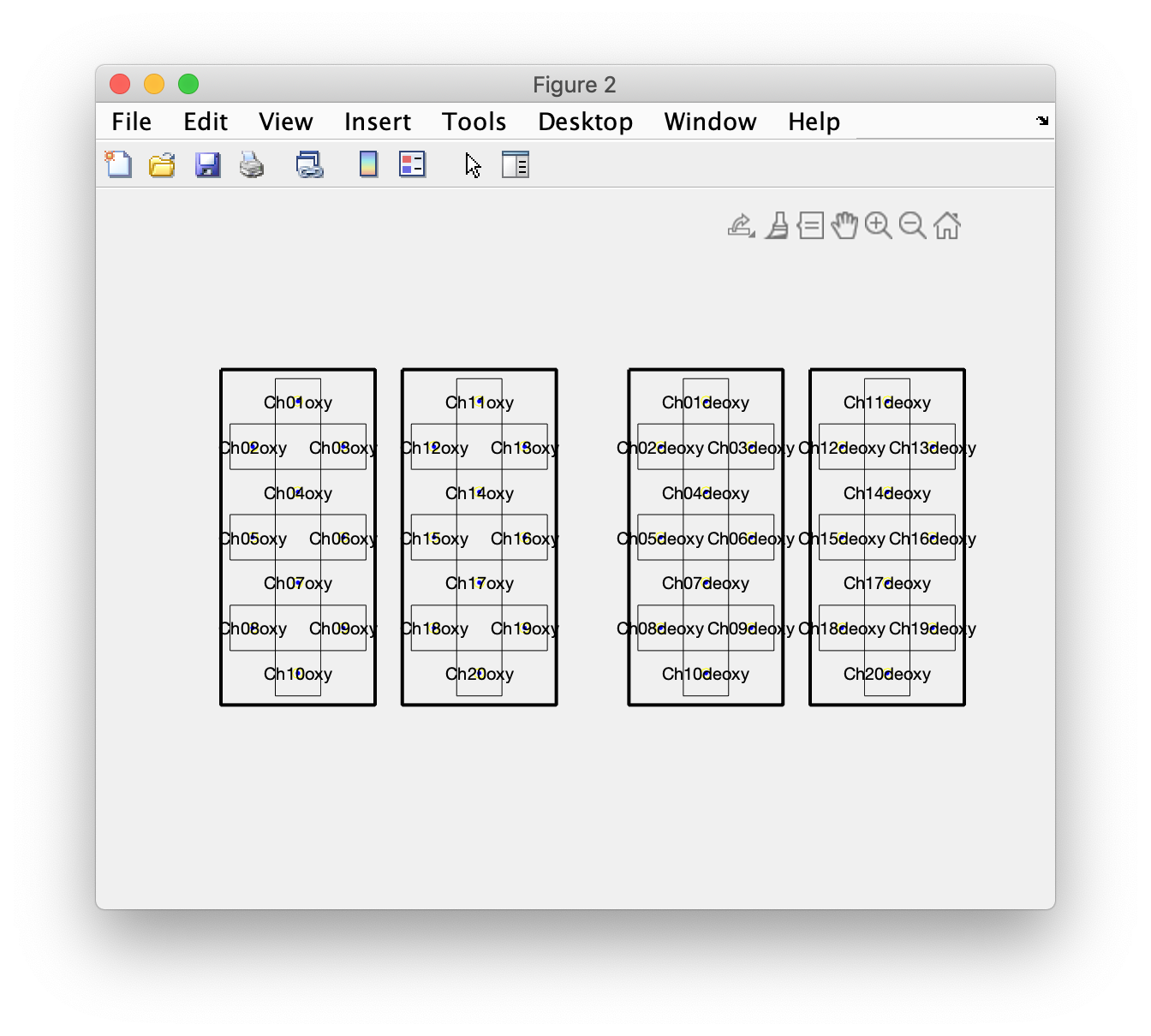 The layout now also shows the outline, as thick black lines. If you disable the outline, you can also see the mask as dotted lines.

Parsing the events and segmenting the data in trials

In general in FieldTrip events have to be aligned with samples. The first sample of a recording on disk is referred to as sample 1.

These numbers are larger than the total number of samples, so they do not directly map onto samples. I started off assuming that the marker time is expressed in milliseconds, but that turned out not to be correct. Therefore I experimented with the following piece of code until I had something that made sense.

Note that 1/data.fsample = 0.075, i.e., with the 13.333 Hz sampling rate each sample happens to be 75 ms. When working with unknown data it is not uncommon to have to deal with a puzzle like this, it reminds me of Kabbalah. 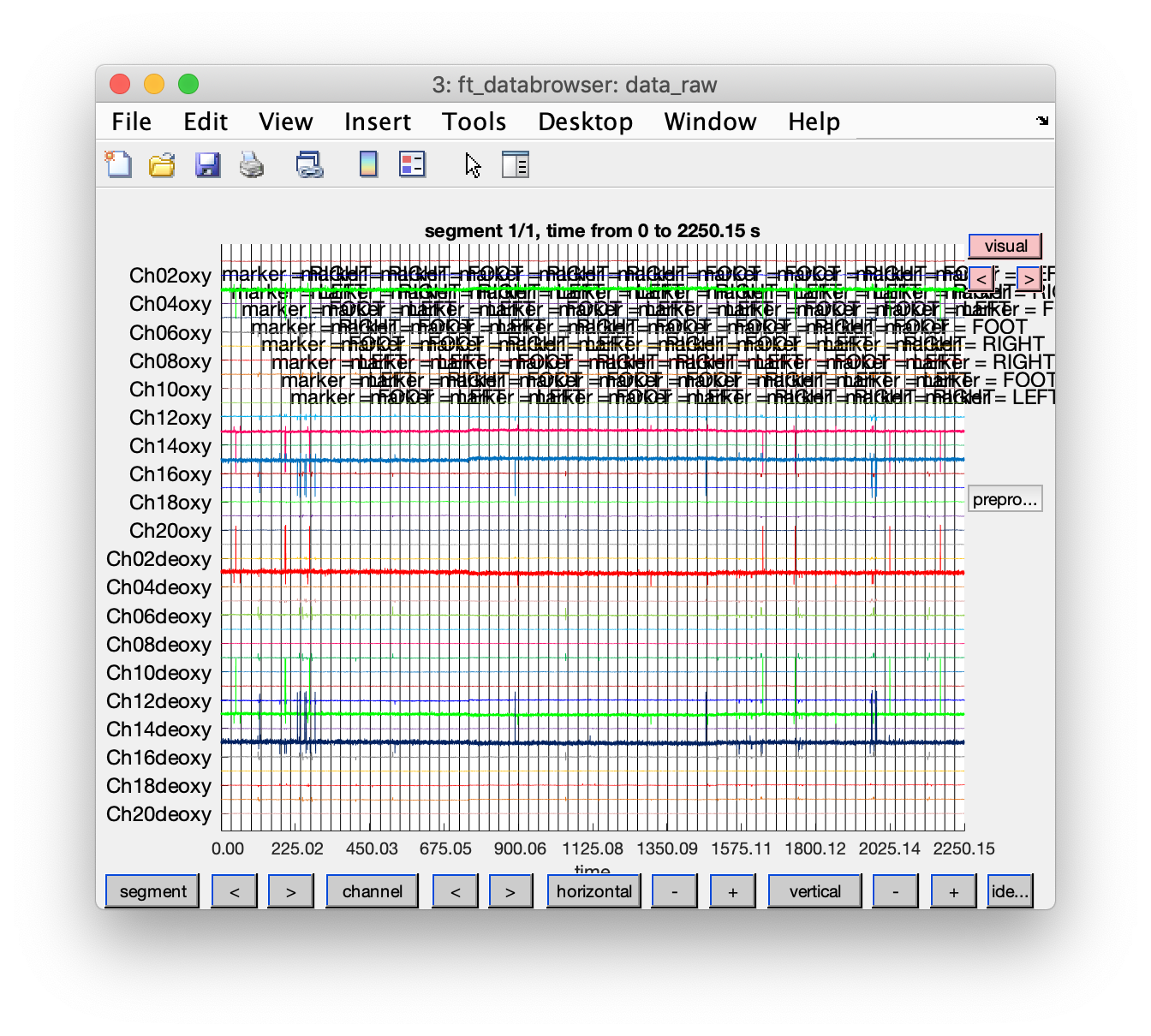 Apply a band-pass filter on the continuous data

Segment the continuous data into trials

To segment the data we have to create a so-called “trial definition”. This would normally be done using ft_definetrial and using the events that were read from the data on disk (had it been a supported file format). The trial definition specifies the begin and end sample of each trial, and the offset, i.e., how many samples the time defined as t=0 is shifted relative to the data segment. Furthermore, it can contain additional columns with trial specific information, such as condition codes.

The temporal structure of each trial is

We will use the standard FieldTrip event structure to make the trials, this is also what ft_read_event returns for supported data formats.

The begin sample, end sample and offset should be integers:

and we map the right, left, and foot condition onto condition codes 1, 2, and 3. 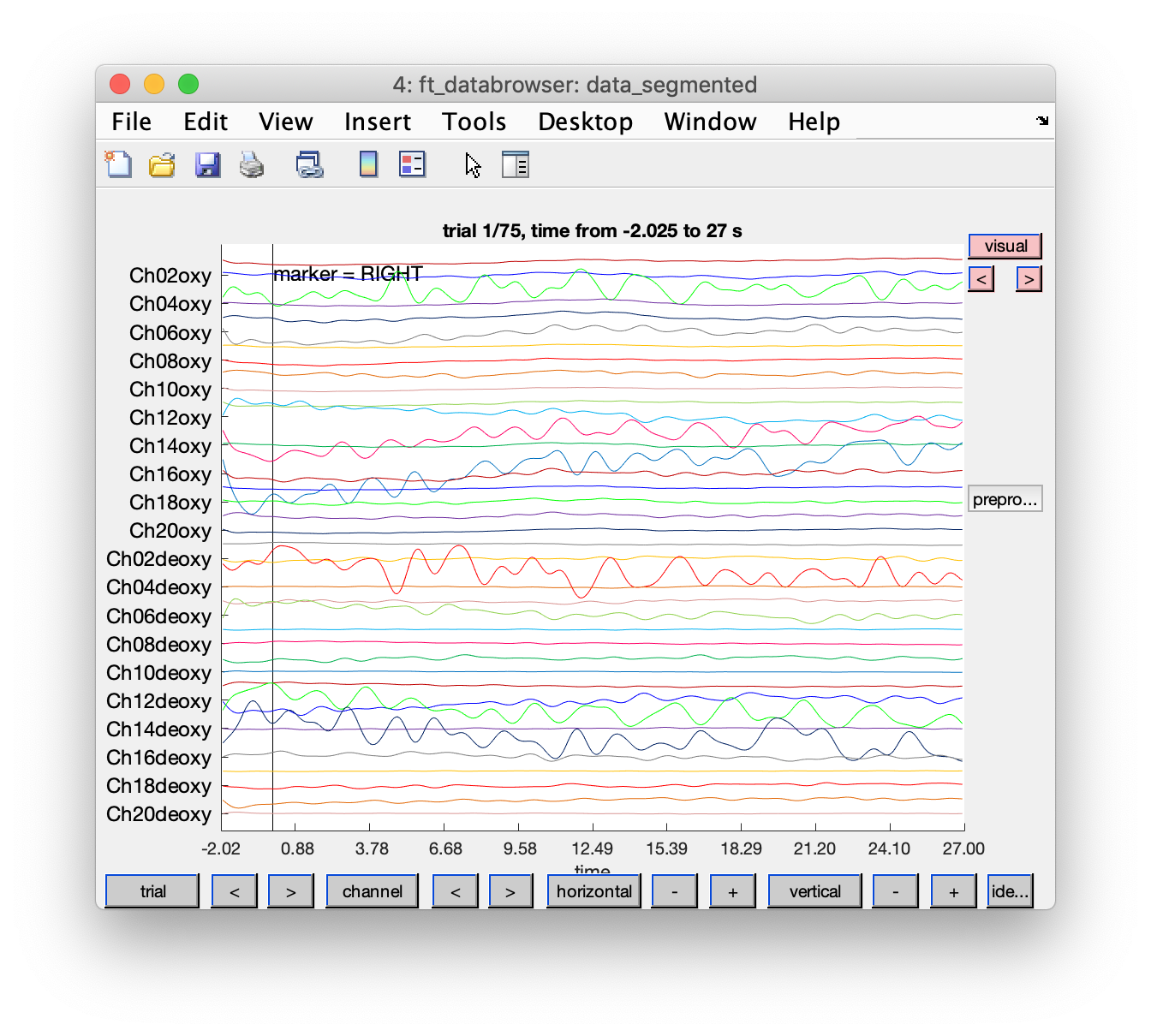 Average the segmented data, conditional on each condition 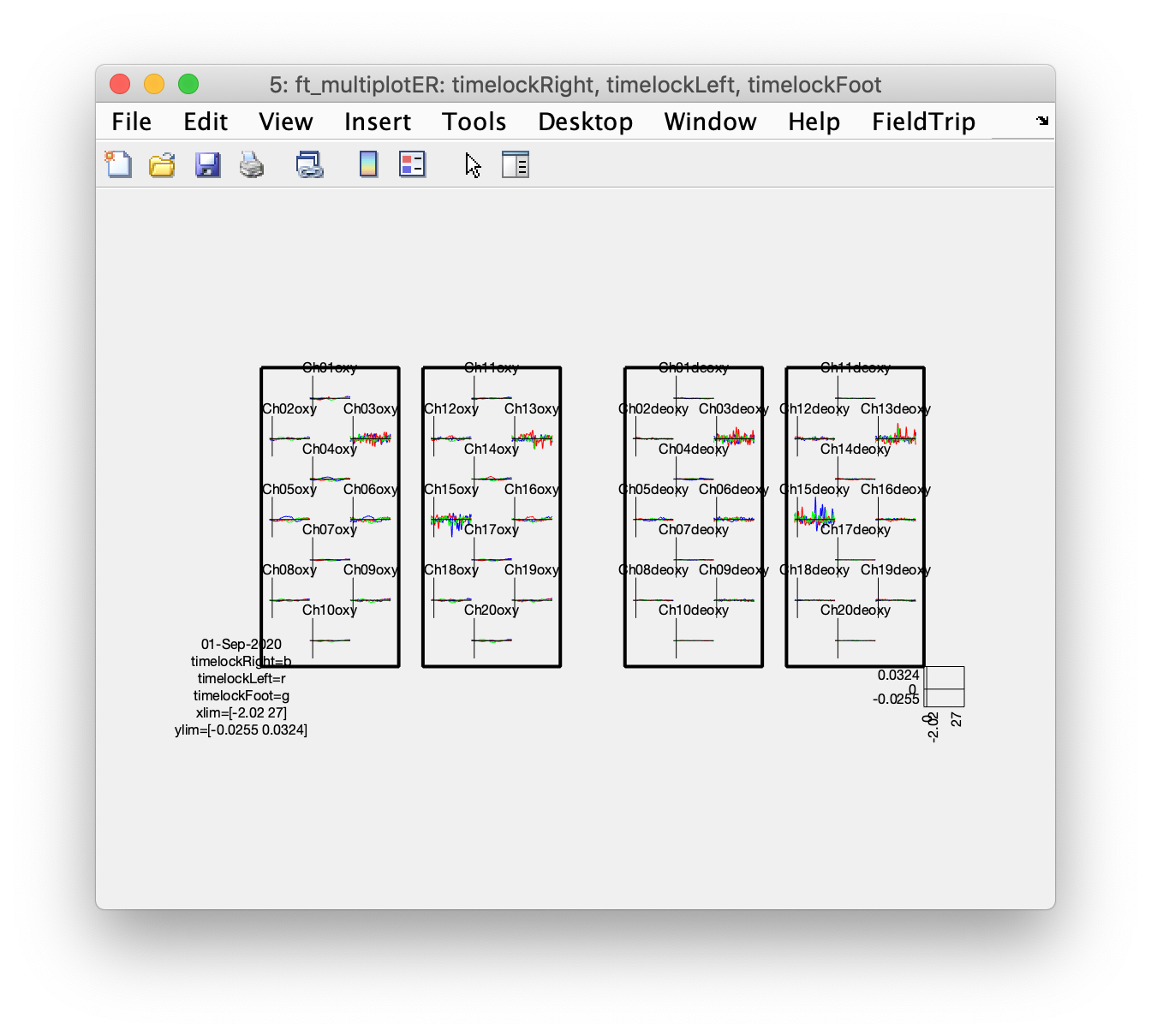 This example script explains in more detail how for a NIRS dataset the oxy and deoxy channels can either be plotted on top of each other (which is spatially consistent with how the data is recorded) or side-by-side. Plotting them side-by-side makes the results easier to interpret, especially if you have multiple responses (like we have here for left, right and foot conditions). For plotting topographic distributions you also have to ensure that your 2D channel layout does not have overlapping channels that have bvery different numbers.

Plot the topography of the averaged responses

This step benefits from the layout having an outline and especially a mask, otherwise the interpolation will cause the whole image to be color coded, including the pieces in between the hemispheres and in between the oxy (on the left) and deoxy channels (on the right). 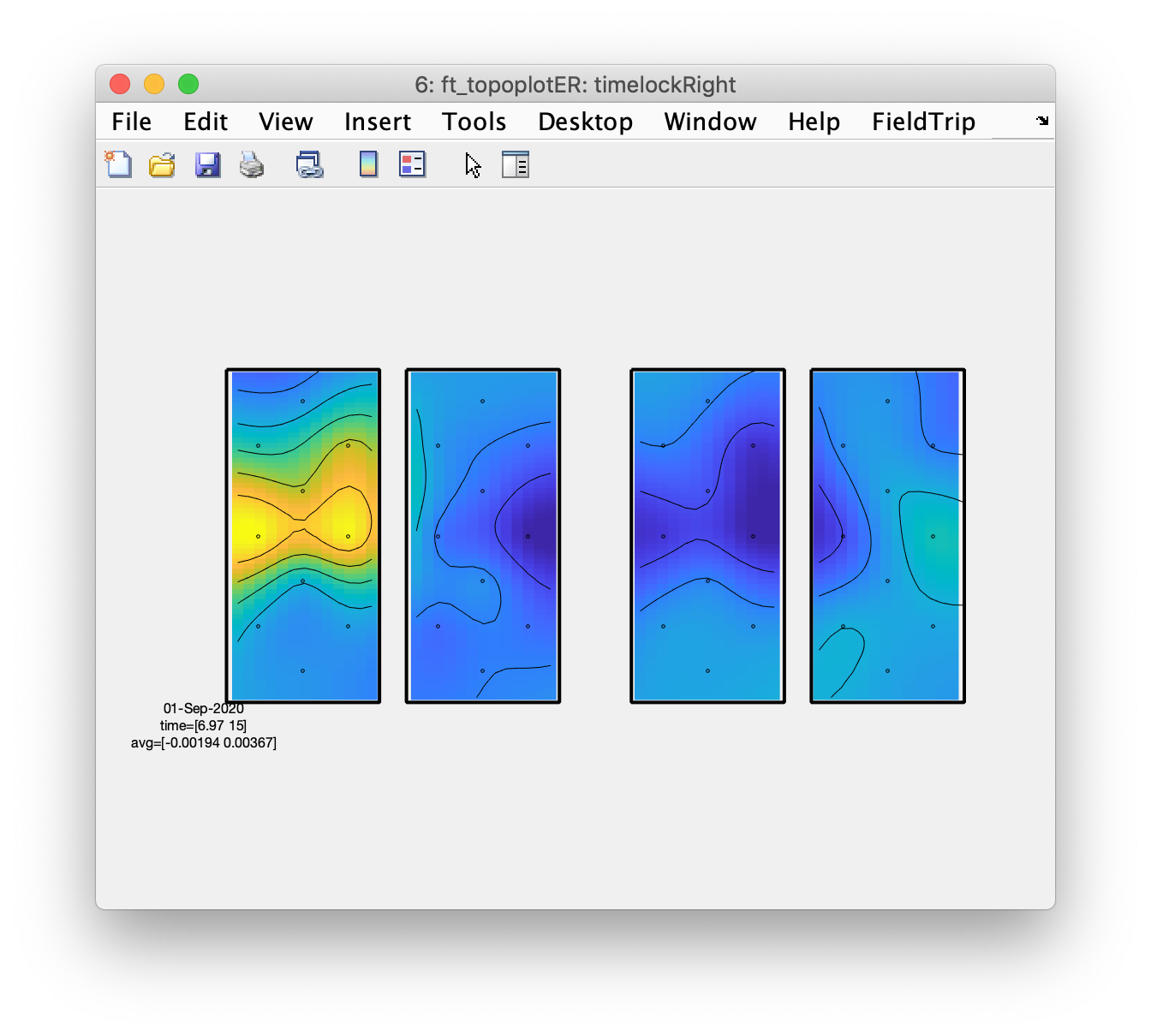 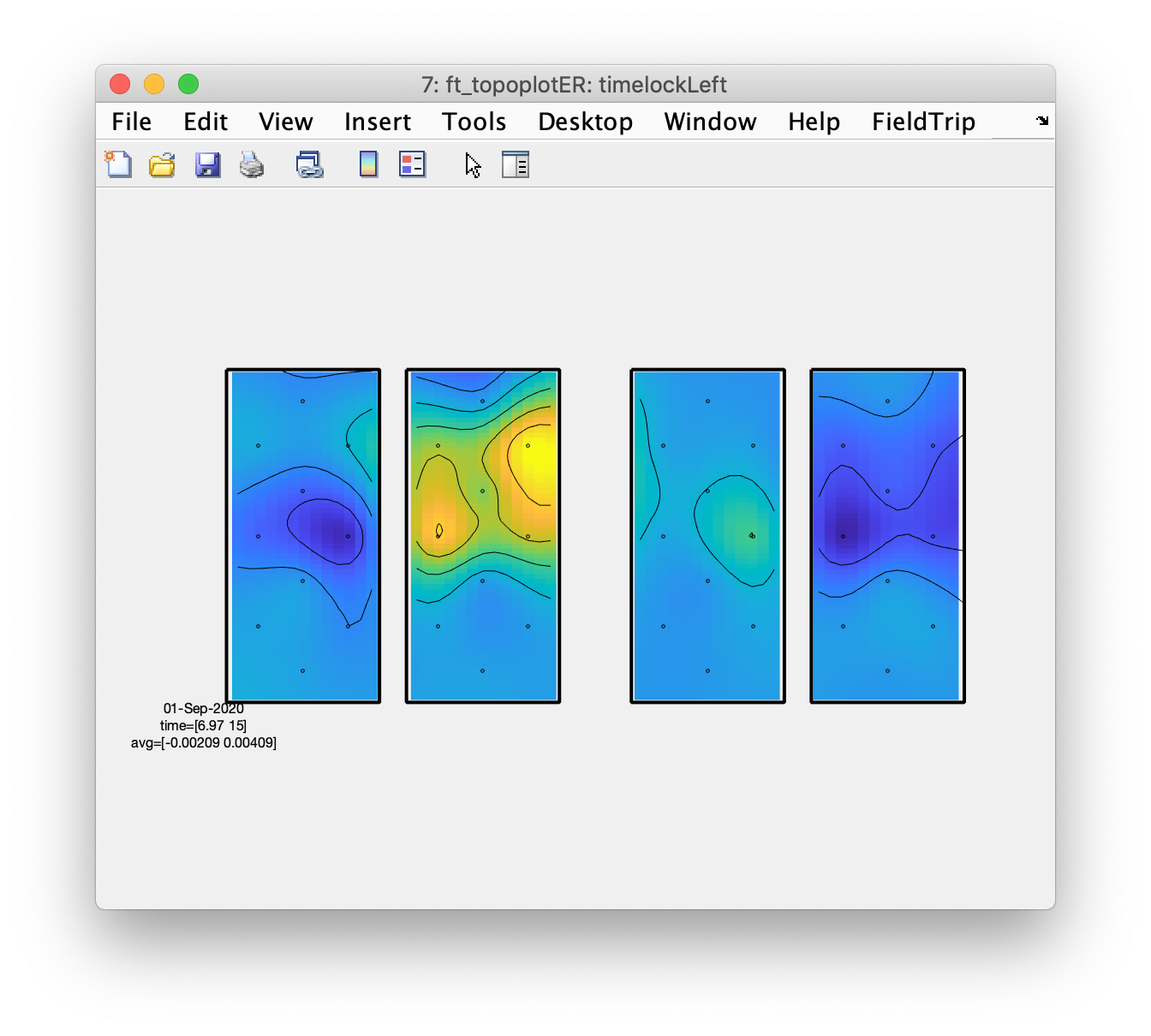 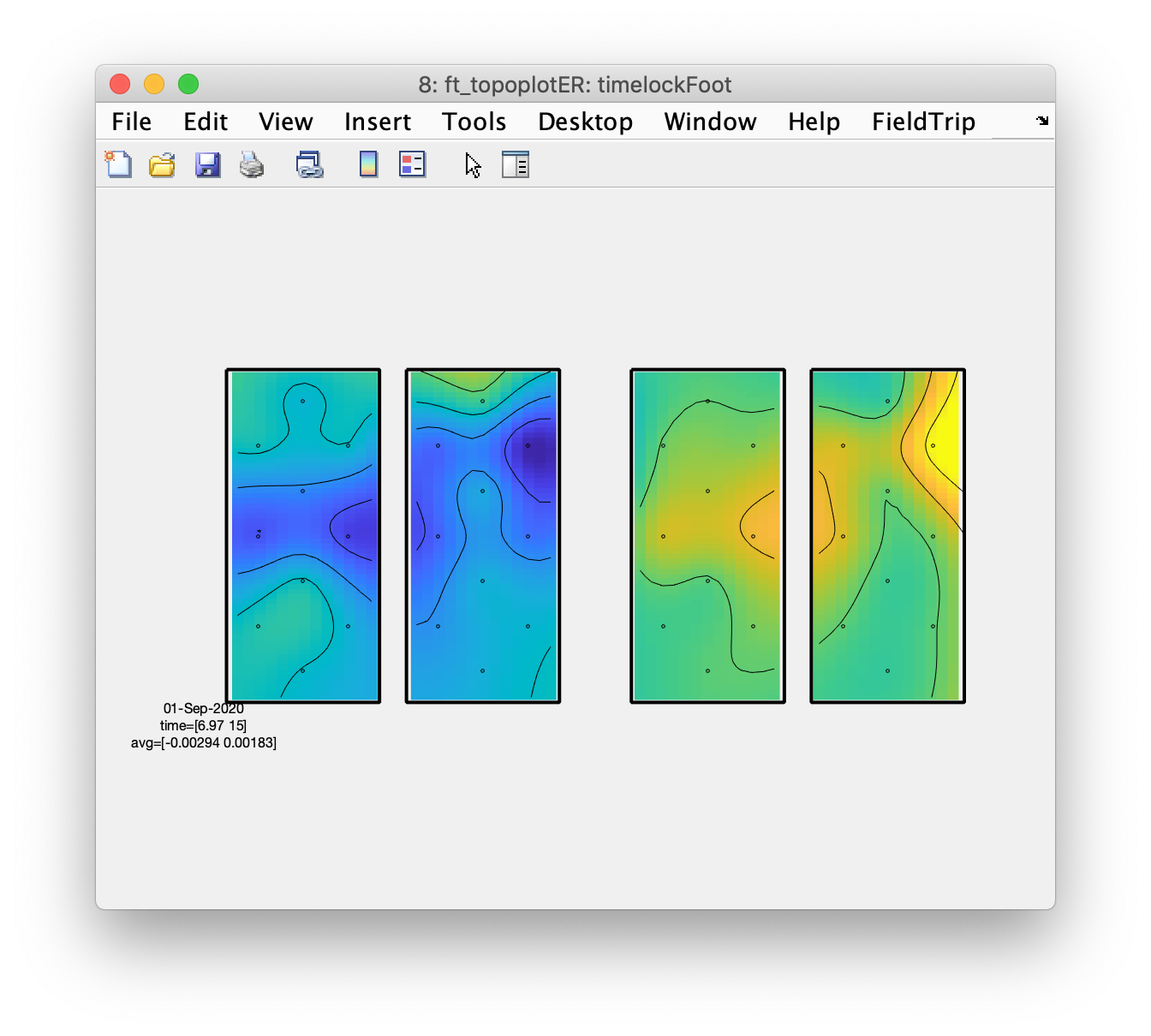