EEG and intracranial EEG (iEEG) data, which includes sEEG and ECoG, is often recorded relative to a reference electrode that is good for the signal quality and for noise suppression (e.g., with an electrode firmly attached on the mastoid behind the ear), but that is not neccessarily the most optimal for subsequent analysis or interpretation of the data. Hence, it is common to apply some re-referencing in the preprocessing of EEG and iEEG data.

With cfg.refmethod='avg' the average is computed over the channels specified in cfg.refchannel and subtracted from all channels that were selected in ft_preprocessing.

You can use this to compute an average reference over all electrodes like this:

After this preprocessing step, the average or mean over all channels will be zero.

Note that you can also do the reading and re-referencing in one step like this:

In the examples here we are doing it in two steps to reuse the data that is read into memory and to make it easier to compare the before and after data.

You can also use cfg.refmethod='avg' to compute an offline linked-ears reference, i.e. the average of both earlobes or both mastoids.

If your original reference during data acquisition is for example FCz and both mastoids are also recorded, then that would look like this:

If your original data was referenced during data acquisition to the right mastoid (M2), then the potential on that mastoid is by definition zero. Since the potential on the reference is not interesting, there is no channel stored in the EEG file for the reference. The cfg.implicitref option allows to add a reference channel to the data matrix; it will be all zeros. Subsequently, it can be included in the new re-referencing scheme:

The implicit reference is added prior to searching for the reference channels. If M2 were used as reference and you did not specify it as cfg.implicitref, then the cfg.refchannel selection will look at the channels in the original data and the list {'M1', 'M2'} will only match channel M1, which means that the reference would be the average of M1, i.e. M1 itself, and the data is effectively not changed.

Using cfg.refmethod='median' works largely the same as taking the average, but it computes the median instead of the mean. This is expecially useful when you have one (or a few) channels with a lot of noise: the median will be less sensitive to the outlier values than the mean.

After this preprocessing step, the median over all channels will be zero.

This method requires a forward model for the sources that are assumned to have generated the EEG data, this can be computed using ft_prepare_leadfield.

The following example uses a spherical arrangement of the electrodes, in combination with a three layer sperical headmodel. The sources consist of a layer of 642 evenly distributed dipoles that are shifted inward from the inner skull surface.

Often the activity recorded by a channel is contaminated by the signal coming from nearby regions, that diffuses in its surroundings. This might cause the mis-classification of channels which are not correlated with the experimental task as if they were indeed task-correlated. To ensure a better detection of task-related channels, it is recommended to adopt a more localized re-referencing scheme, which could better take into account the activity relative to each channel’s surroundings. For this purpose, ft_preprocessing allows the possibility to perform bipolar or Laplacian re-referencing.

The bipolar re-referencing scheme consists of the re-referencing of each channel against its closest neighboring channel. Before calling ft_preprocessing it is important to make sure that the channels are ordered on the basis of their proximity to each other. Bipolar re-referencing is performed by specifying cfg.refmethod = 'bipolar' as in the following example.

Note that, since each of the N original channels is re-referenced against the next one in order, the last channel cannot be re-referenced and, at the end of the process, the dataset will contain N-1 channels. To emphasize the fact that the signal of each channel now derives from the subtraction between two neighbouring channels, all labels are modified. As an example, in place of the channels C1, C2 and C3, the re-referenced dataset will present the channels C1-C2 and C2-C3.

If you are analysing an iEEG dataset, you might want to re-reference separately channels belonging to different electrode shafts. It is possible to do so by setting cfg.groupchans = 'yes' and by ensuring your channels are labeled correctly. Channels of each shaft should start with one or multiple letters (e.g., ‘LT’, ‘LP’, …) and the subsequent electrodes should be numbered (e.g., ‘LT1’, ‘LT2’, …).

Note that, differently from the bipolar method, the number of channels is the same as the input data and the original labels are maintained.

If you are analysing iEEG data, you are probably interested in re-referencing channels separately for each electrode shaft. This can be done exactly as it was described above for bipolar re-referencing, by configuring cfg.groupchans = 'yes' and by making sure that channels are correctly labeled. Channels of each shaft should start with one or multiple letters (e.g., ‘LT’, ‘LP’, …) and the subsequent electrodes should be numbered (e.g., ‘LT1’, ‘LT2’, …).

Using the cfg.montage option, you can specify an arbitrarily complex “montage”. All of the previous methods (except for the median) could in principle be implemented with this.

A montage (also known as a “linear derivation”) specifies a linear mapping or combination from the (old) channels in the original data to the new channels in the re-referenced data. Basically it is implemented by a matrix multiplication, following some shuffling of the the rows of the data matrix. The montage is explained in more detail in the ft_prepare_montage function.

As an example, a bipolar montage could look like this:

Where the input data consists of 4 channels, and the output data would have three channels with the pair-wise difference between ‘1-2’, ‘2-3’, and ‘3-4’.

This can also be used to implement a single or double “banana” montage for clinical EEG, like this: 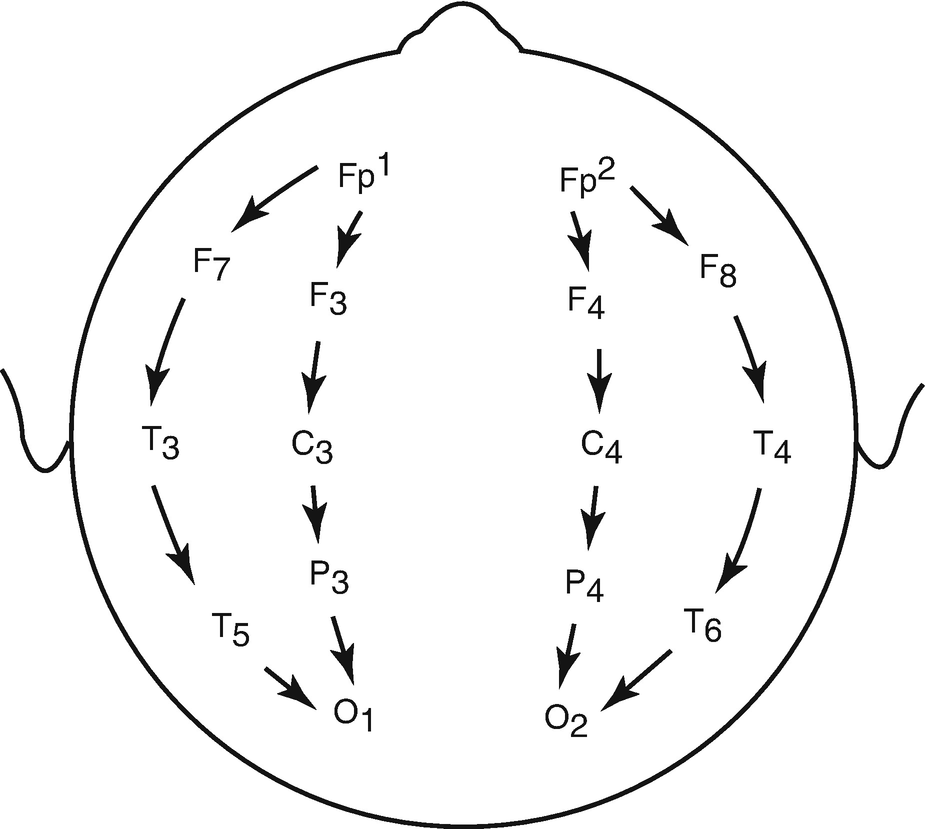 You can also use the cfg.montage to construct an average reference like this:

However, the disadvantage of doing it this way is that if you remove a channel prior to re-referencing, you have to update your montage. This is not needed when you use cfg.refmethod='avg'.