How can I fine-tune my BEM volume conduction model?

The construction of a BEM volume conduction model is not always straight forward, especially if the quality of the MRI is not optimal or if the model needs to be very accurate. For example, getting an accurate estimate of the thickness of the skull or incorporating the CSF layer is difficult.

The strategy employed in FieldTrip for constructing the BEM model boils down to the manipulation of geometrical data. The following qualitatively different classes of data are distinguished:

In case of the BEM, the volume conduction model consists of one or multiple homogenous and isotropic compartments. The compartment boundaries are closed and non-intersecting surfaces that are described by triangulated meshes. Furthermore, each of the compartments is described by a conductivity.

We will refrain from using “head model” in the subsequent explanation, since each of the representations can be thought of as a “model describing the head”.

Here it helps to distinguish the different representations. Examples of these are given in ft_datatype_segmentation.

Inside ft_prepare_mesh there are some helper functions that do some sanity checks on the segmentation and that can convert one representation to another.

The MATLAB image processing toolbox includes a number of morphological operations that are very useful for manipulating binary segmentations. Some of the most common operators are imfill, imdilate, bwlabeln, etc.

In particular imdilate can be used to augment the volume of a closed surface (e.g., the inner skull) in order to render the other surrounding tissues (e.g., the outer skull). An example is shown below: 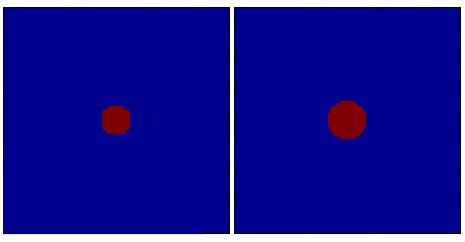 An example of the imfill function is given below. This is the case, for example, in which we want to fill the volume so that it constitutes a single entity. It results in being useful for triangulation, as explained in one of the techniques to obtain the outer-most surface (i.e. the skin).

The same effect can be reached with the use of another morphology function: bwlabeln. This function classifies the cluster of neighboring voxels and attaches a label to them, so that different objects can be easily distinguished (and processed) in the successive steps.

The ft_prepare_mesh function has the ‘projectmesh’, ‘iso2mesh’ and ‘isosurface’ methods for constructing a mesh from a segmentation.

The projectmesh method works by projecting lines from the center of an icosaedron or other nice sphretical mesh through the vertices, to obtain the points of the volume that correspond to the transition between inside (true) and outside (false of the binary volume. The resulting surface is closed and topologically equivalent to a sphere. However, the triangles are not uniformly sized over the whole surface.

The isosurface method corresponds to the marching cubes algorithm implemented by the MATLAB isosurface.m function. This results in a very detailed description of the surface. The level of detail is typically too large for BEM, making it computationally too slow. Furthermore, the resulting mesh is not guaranteed to be closed (i.e. topologically equivalent to a sphere).

After constructing the volume conduction model of the head, FieldTrip can compute leadfields and estimate sources by solving the inverse problem. Please see the tutorial documentation for complete examples.