At the Donders we have an Eyelink 1000 eyetracker that supports sampling rates up to 2000 Hz for monocular and 1000 Hz for binocular tracking. For a technical overview about Eyelink 1000 characteristics look here

With your presentation script on the stimulus presentation computer you can also write data to disk in the form of behavioral log files. In the subsequent examples we will not consider integrating the physiological measurements with the data in these behavioral log files. We will only consider physiological data from the eye-tracker, from the EEG system, and from the MEG system.

Eye tracker recordings by themselves

It is possible to use the eye-tracker in combination with a behavioral task that involves stimuli (usually on a screen) and response, but without EEG or MEG recordings. In this case the EyeLink computer records all data.

Converting the EDF file to an ASC file

The Eyelink 1000 output is an _.EDF file (eyelink data file). There are several ways to read (directly or indirectly) this data into MATLAB. To use FieldTrip for data analysis, you have to convert the EDF file to an ASCII text format using the Eyelink executable EDF2ASC.EXE. You need to run the EDF2ASC.EXE that can be downloaded here under MSDOS on the Eyelink computer and find your _.EDF recording as follows:

You can type DIR to see if your *.EDF file is located in the current working directory. When the conversion is finished, you need to reboot the Eyelink PC to windows to read your data, because in MSDOS you cannot use USB memory stick.

After converting the EDF file to ASC format and transferring it from the Eyelink computer, we can read it in MATLAB.

To read in the continuous data, you can do this:

Channel 1 represents time, channel 2 is the horizontal x-coordinate, channel 3 is the vertical y-coordinate and channel 4 is the pupil dilation.

If you want your channel names to be more informative, you can use the following montage (see ft_apply_montage) to rename the channels while preprocessing:

Typically, you would want to analyze the eye movements relative to certain events (e.g., stimuli). For that you would use a trial-based representation, where each trial is time-locked to the event of interest.

The events represented in the eye-tracker datafile can be explored using ft_read_event like this:

You can see that all events are coded as type “INPUT”. You can plot the event values against the time, with each individual point representing one INPUT event: 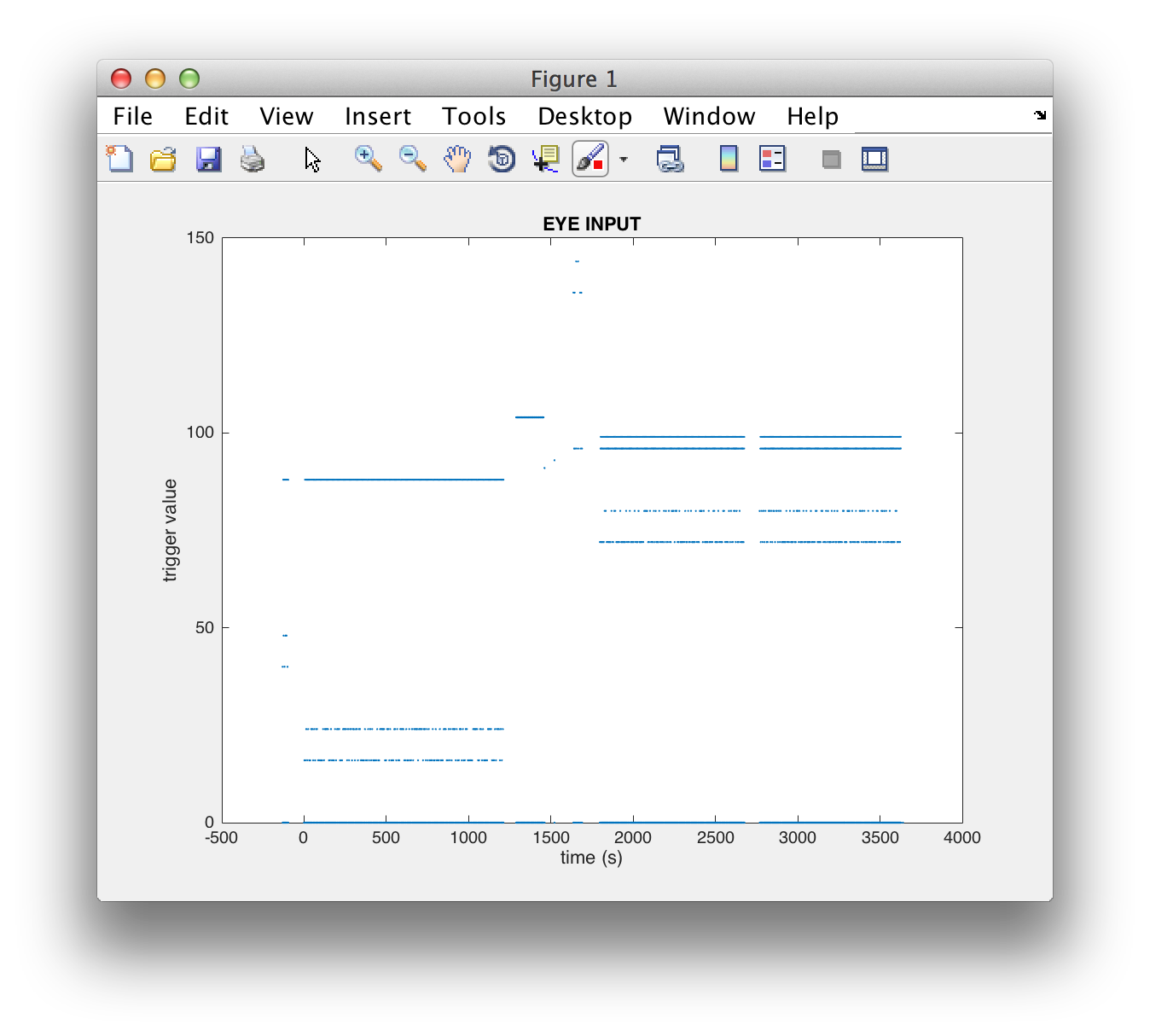 You can also visualize the eye-tracker data in combination with the INPUT triggers using ft_databrowser:

or by reading the data straight from disk:

The following shows the data and the events in the first 20 seconds of the recording: 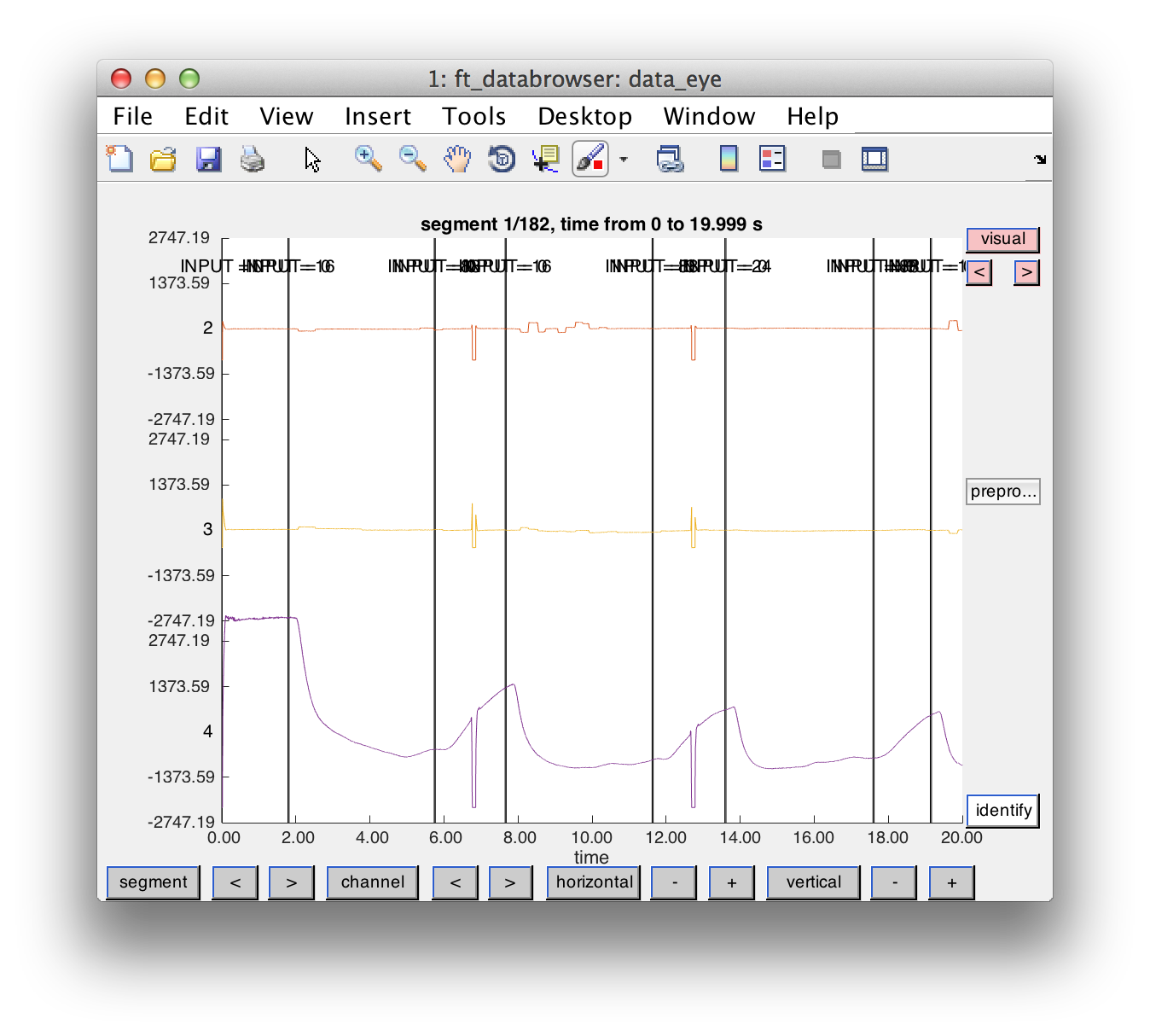 If you record EEG together with eye-tracker data, you will have two separate recordings in separate files. The recordings will have been started at slightly different moments and may be a few seconds to a few minutes shifted relative to each other, depending on your experimental procedure. Furthermore, the sampling rate will be different. Hence you cannot directly append or concatenate the two datasets. The trick to link these recordings to each other is that you have to ensure that your stimulus triggers are sent (and acquired by) both the EEG system and by the Eyelink system.

In the following example, we are going to emulate such a situation, by reading the EEG channels from an MEG dataset, but ignoring the MEG specifics.

Subsequently you can read the events from the EEG dataset.

In this dataset (since it is a MEG dataset) there are four types of events. The ‘trial’ and ‘frontpanel trigger’ events are not interesting; the UPPT001 events represent stimuli and the UPPT002 events represent the responses on the button box. 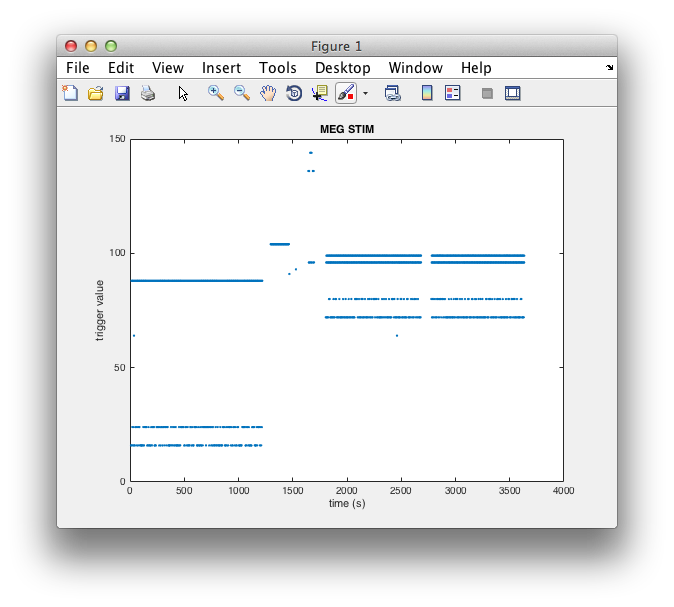 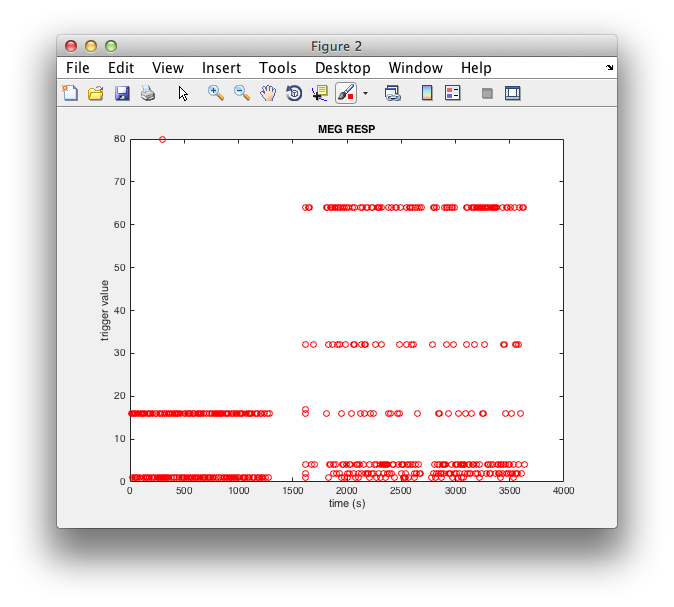 There are 2 triggers in the CTF file, that are not specified anywhere and should not be there (with a value of 64). These are not present in other subjects’ data sets from the same experiment. I have no clue where they would come from but suspect it to be a hardware glitch of the Bitsi box (which links the serial port of the presentation computer with the input of the CTF and Eyelink acquisition systems). The Eyelink and CTF system might have different detection thresholds and different minimum durations of the TTL pulse, therefore it might show up in one dataaset and not the other.

There are then still 2 surplus Triggers with a value of 0 in the EDF file, which appear at the start and the end of the EDF. These are software generated and hence not in the CTF dataset.

Again using the ft_databrowser you can check the data relative to the events. 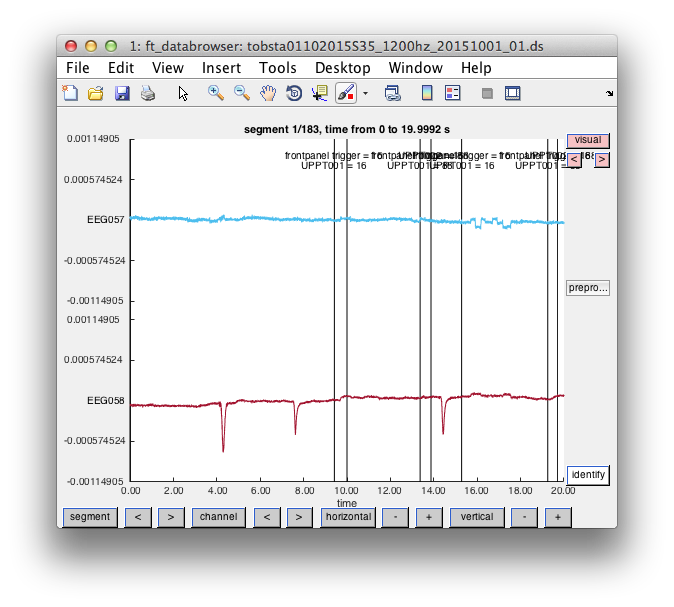 Subsequently, you resample or interpolate the data of one recording on the time axis of the other, and you append the data sets

The Eyelink system has an optional Digital-to-Analog converter (DAC) card, which makes the eye position and pupil diameter available as analog signals. These analog signals can subsequently be sampled and recorded with another data acquisition system. At the DCCN, we have the Eyelink DAC output connected to the CTF275 general-purpose ADC channels. The synchronization between the eye-tracker and the MEG data is trivial in this case, given that both data types are sampled by the MEG electronics. In this case you do not need the ASC or EDF file, although we nevertheless recommend that you copy them from the Eyelink computer and archive them along with your MEG data.

The DAC conversion in the Eyelink system takes some time, and therefore the UADC channels in the MEG recording have a small (but fixed) delay relative to the actual eye movements.

Since both MEG and Eyelink get the same triggers, you can use FieldTrip ft_definetrial on both to read the same segments.

and plot them side by side 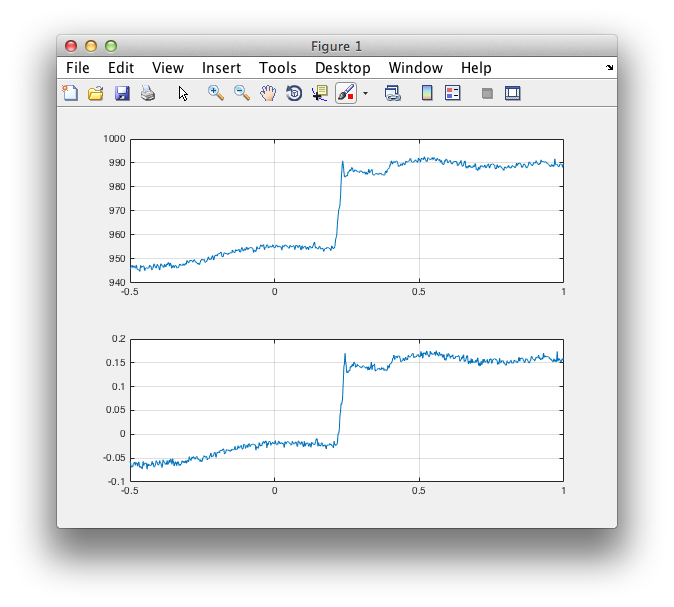 If you look carefully, you can see the delay in the MEG ADC channels 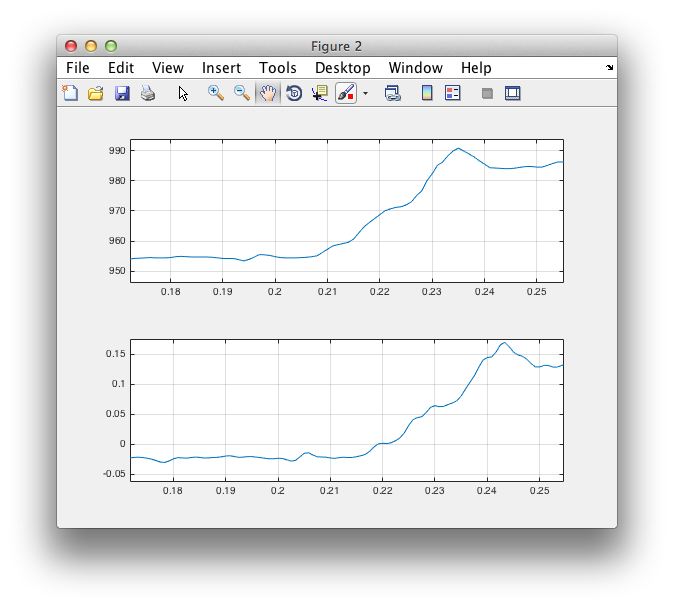 Subsequently, you can resample the 1000 Hz Eyelink data to the 1200 Hz MEG data and append them in the same data structure for more convenient joint processing.

What are the units of the eye-tracker data?

The units of the eye-tracker data depend on the specifications in the ‘Set Options’ screen of the Eyelink acquisition software. Here, the units of GAZE output for horizontal (x-coordinate) and vertical (y-coordinate) data are described.

Eye position data can in principle be described as:

In the Eyelink ‘Set Options’ screen, set ‘Analog Output’ to ‘GAZE’ before recording your data.

The UADC channel values are expressed in Volt. The GAZE positions as recorded in the EDF file are converted into voltages according to these formulas:

Make sure that you use calibration and validation procedures before the recording for meaningful GAZE output!

This is an example how to convert the horizontal and vertical traces from the UADC channels in Volt to screen coordinates in pixels:

Gaze position data reports the actual (x, y) coordinates of the subject’s gaze on the display, compensating for distance from the display. The units are in actual Data Files display coordinates (usually pixels) which can be set in the EyeLink configuration file PHYSICAL.INI. The default EyeLink coordinates are mapped to a 1024x768 display, with (0,0) at the top left and (1023,767) at the bottom right. Note that the settings of your presentation screen and the presentation software may overwrite the settings in PHYSICAL.INI.

Pupil size data can be recorded as ‘area’ or ‘diameter’ in pixels. The area is recorded in scaled image pixels. Diameter is calculated from pupil area fit using a circle model. Note that when pupil diameter is your variable of interest, you should correct for viewing direction. When the eye rotates away from the camera during viewing, the pupil seems smaller. This effect can be corrected for with a geometrical model described by Hayes and Petrov (2016), but this requires that you know the geometry of the eye tracking camera relative to the eye and the computer screen. Alternatively, you could use ft_regressconfound to try and remove the influence of viewing direction on pupil diameter.

If you want to inspect the accuracy of the recorded Gaze positions compared to what you presented on the screen, you need to convert the Presentation coordinates to screen coordinates. The convention in Presentation is that {x = 0; y = 0;} refers to the center of the screen. In case of even screen width and height, Presentation assumes an extra Pixel, i.e., in that case Presentation’s central pixel is one pixel to the right and one pixel below the true screen center.

An example for mapping between Gaze postions and presented stimuli (trials 1 to 5) is shown below (+ indicates presented targets, Gaze position depicted in blue). 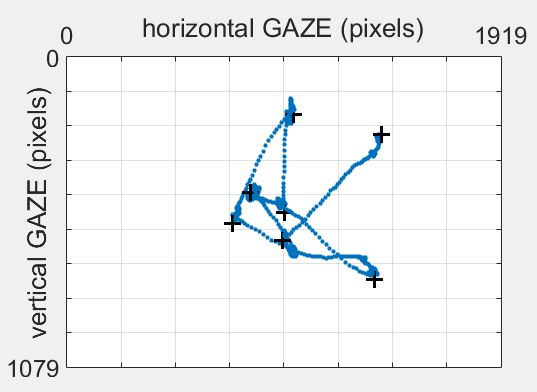