Getting started with LIMO EEG

LIMO MEEG is an open source toolbox for statistical analysis of MEEG data (Pernet et al., 2011). The main goal of the toolbox is to provide ‘full space’ analyses of experimental effects, i.e. simultaneously for all time and/or frequency time points and all channels, independent components or sources. It is implemented in MATLAB and requires the MathWorks statistics and machine learning toolbox.

The following figure illustrates the hierarchical analysis consisting of a 1st-level estimation of a GLM regression model and a 2nd-level statistical test of specific contrasts: 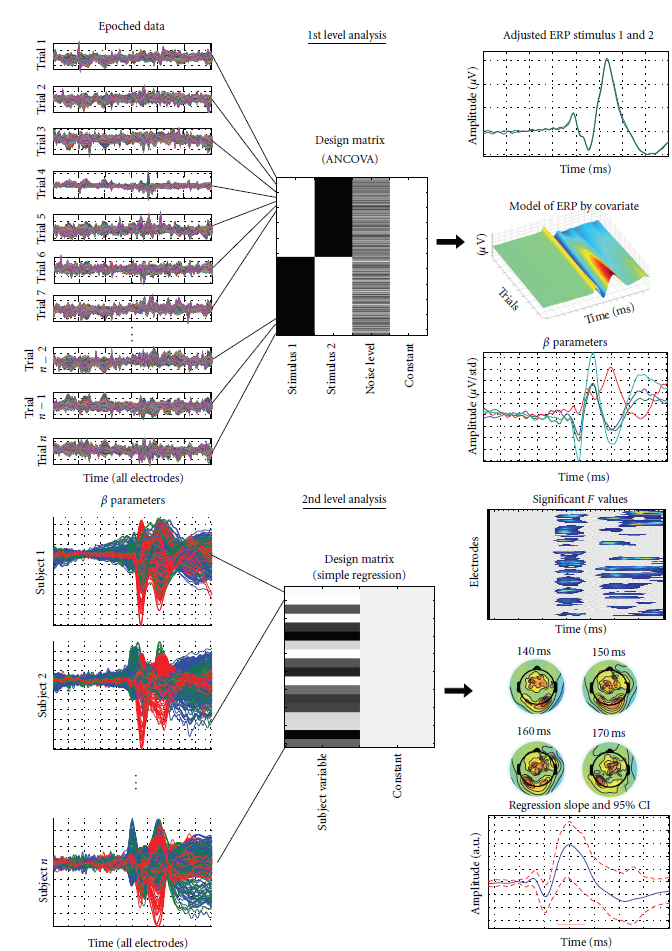 LIMO was initially designed as a plug-in of EEGLAB, but more recent versions are also compatible with FieldTrip raw and source data. Statistical analyses can be performed on other data representations, but that requires some manual reformatting of the data structures.

Although LIMO is primarily designed for EEG data, it can also process MEG and iEEG data.

As LIMO directly reads and writes data from/to disk, the recommended way to organize the input data is through Brain Imaging Data Structure (BIDS) standard. This standard aims to organize neuroimaging data in a uniform way to simplify data sharing through the scientific community. More background on BIDS and example datasets can be found here.

The inputs of LIMO consists of preprocessed and segmented data (EEG or source-level time series) that are stored as .mat (FieldTrip data) or .set (EEGLAB data) files. Following BIDS standard, those data are known as derivatives data.

The outputs of LIMO are generated at each levels:

The following figure gives an example of inputs and outputs within the whole BIDS structure: 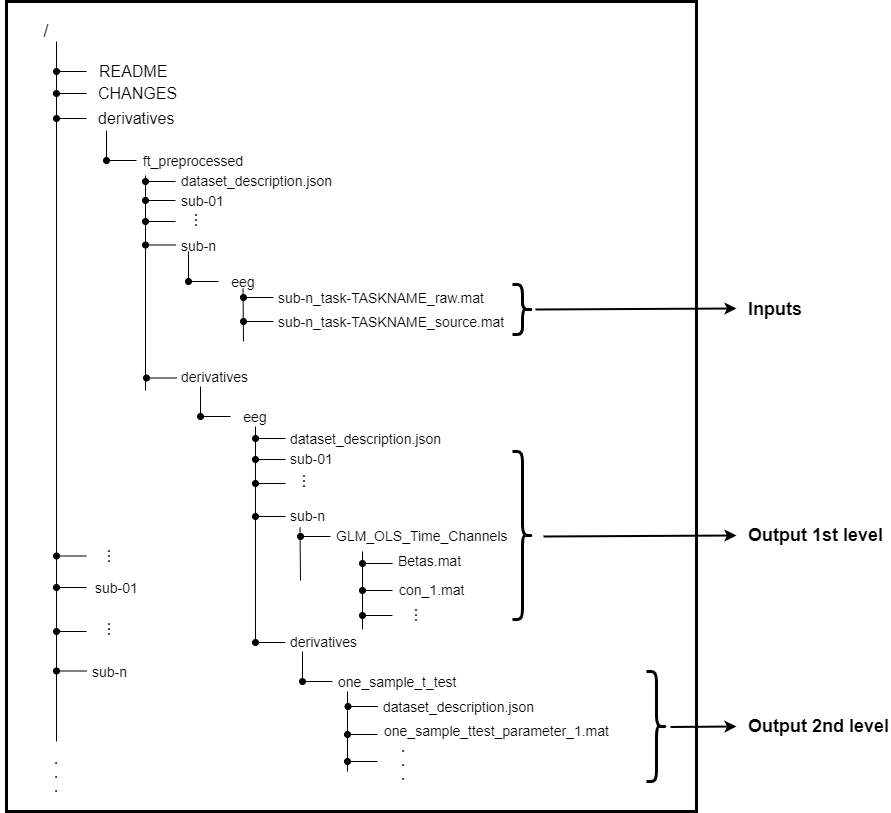 DISCLAIMER: the derivatives data generated by LIMO tools are not organised as illustrated above yet, but this is how it would work in the very near future.

How does LIMO use FieldTrip?

LIMO integrates with some FieldTrip functions to deal with FieldTrip data structures. The ft_datatype function is used to determine the type of data structure in the .mat file, ensures that the data structure is valid and that it has the required fields. Subsequently, LIMO convert the data to its appropriate low-level format. The following figure illustrates this process: 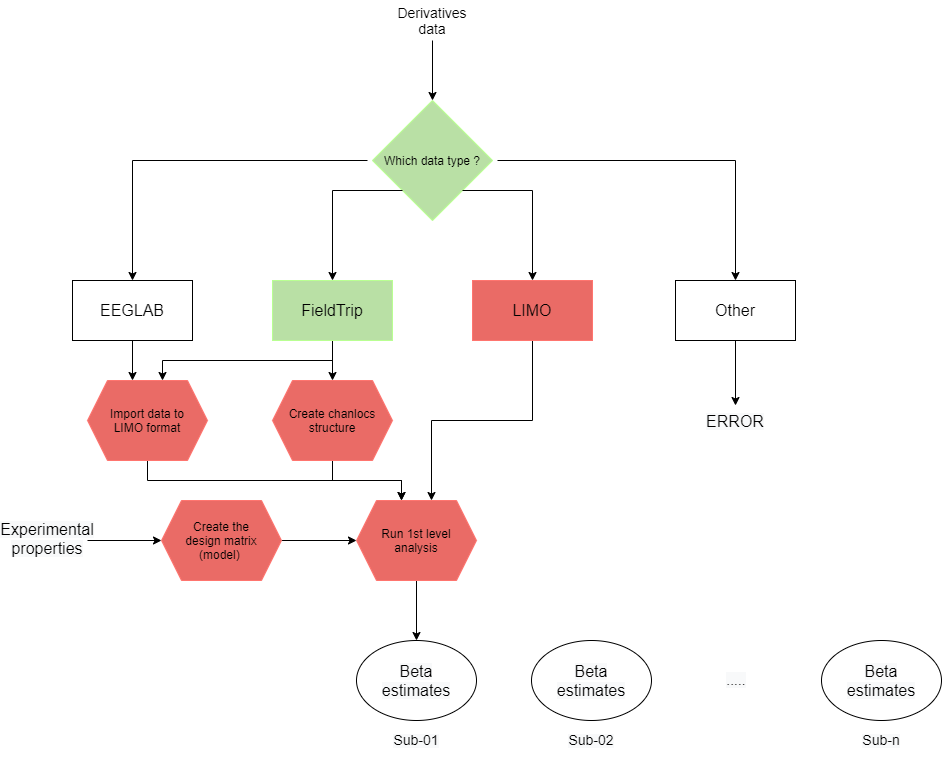 After having estimated the betas with the 1st-level analysis, LIMO continues with the 2nd-level (group level) analysis.

Processing data through FieldTrip functions and performing statistical analyses on the proceesed data in LIMO is easy. The users can specify the experimental design (the GLM model) and the FieldTrip data as input. Using BIDS raw and derived data, the whole pipeline going from raw data, preprocessing, 1st-level analysis and 2nd-level testing, can be considered as follows:

The example that follows uses the EEG of the multimodal Wakeman & Henson (2015) dataset. This data is aquired during visual stimulation with 3 face categories (famous, unknown and scrambled) and 1 covariate (the time between the first and the second repeated presentation of the same face). With the statistical analysis we want to identify spatio-temporal regions with a significant effect of the face type on the ERP, as well as the effect of the time between the repeated presentations of the same face. Categories have been coded as integer values: 1 (famous), 2 (unknown), 3 (scrambled), and the covariates are continuous values.

The first step is to design the model corresponding to the study. This design consists of different steps:

The required paths and some additional informations have to be defined

We define the contrast we want to study

The split of the covariates (regressors) has to be defined. Here we want to create 1 column of covariates-by-regressor to analyse the influence on each condition:

In case there are several covariates, we select the desired covariates (regressors) to study. Here there is only one covariate

Create the model. This calls raw data of each subject and designs the required matrices and can take a few minutes.

The beta and contrast estimates are computed subject-by-subject through a parallel computing pipeline. As we want both the betas (i.e. the ERP model) and contrast (the conditional difference) to be computed and stored as “derivatives 2” (cf. the pipeline figure above), we do the following:

Now that everything is properly defined, we can run the computation (Almost all your CPU cores will be requested for this task, it’s time to grab a coffee…)

The group-level analysis will run as a parallel computing pipeline on contrast estimates (in this example).

We first need an estimates of the channel locations representing all the subjects. Here we consider the channel-by-channel average position:

We then select the targeted first-level estimates (here the first contrast, corresponding to face type comparison) and the name of the corresponding statistical test we want to perform

Finally, we run the second level analysis specifying the desired statistical test, the desired number of bootstrap repetitions, and specifying whether a threshold free cluster enhancement (TFCE, Pernel et al., 2015) has to be computed. Another parallel computing pipeline will start which will not take much time.

The results can be plotted by calling the limo_results function. By selecting “clustering” as correction for multiple comparisons and the generated “one_sample_ttest_parameter_1.mat” through “image all”, you obtain the regions of significant difference between the categories as shown by this figure: 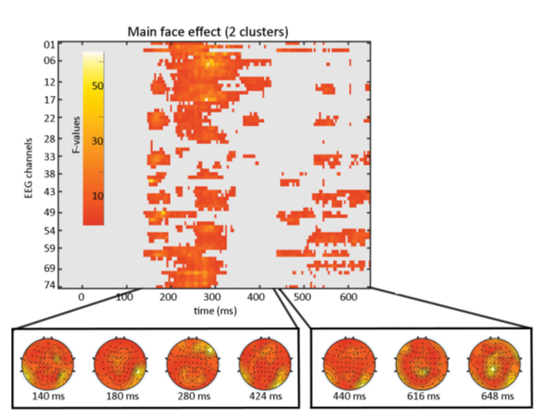