Getting started with Neuralynx data recorded at the Donders Institute

In the following, we will describe our procedure to preprocess high-density electrode data recorded by a Neuralynx amplifier and some basic preprocessing steps particularly used in our recording setup.

To deal with the tremendous amounts of data recorded each session (approximately 1.5 Gb/min), we develop a recording procedure that allows us to:

The downsampling of the original 32 kHz data into the LFP and MUA data is done using the ft_spikedownsample function.

Here, we will briefly explain how we use FieldTrip to obtain these representations of the data. In addition, we will describe some basic preprocessing steps (i.e., relabeling channels and using a montage configuration to re-reference the data). To known more about the characteristics of the fileformats used in our recording and analysis setup, please check the page on spike and LFP dataformats for a description of Neuralynx and Plexon data formats supported by FieldTrip. For general information about getting started with Plexon and Neuralynx using FieldTrip, please refer to the getting started with Neuralynx and getting started with Plexon sections.

The overall flow of datafile formats transformations that we currently use in our recording setup, looks as follow

The Neuralynx acquisition system provides the data in a format containing the raw data directly after A/D conversion. During each recorded session, the .nrd file is written directly to an external Lacie RAID-0 hard disk that is connected by firewire 800. The .nrd datafiles contain a 16kB ASCII header, followed by the multiplexed 32-bit channel-level data (see also this page). The huge size of these multiplexed files (>100 Gb per 45 minute session) precludes them for efficient post-processing. Using the FieldTrip ft_spikesplitting function, we split the .nrd file into separate files for each channel, containing exactly the same 32-bit information. These files are written into a single directory which usually has the extension .sdma, since it contains the “split dma” channels. We refer to this directory as the output dataset, whereas the .nrd file is the input dataset.

An example of the configuration for spikesplitting is provided belo

It is also important to note that:

The ft_spikedownsample function preprocesses and downsamples the LFP data sampled at 32 KHz to 1 kHz. The LFP data at 1 kHz can subsequently be analyzed.

An example of the configuration for ft_spikedownsample is provided belo

This basic configuration structure is necessary to downsample the data. Optionally, we can add other preprocessing options that allow us to obtain the LFP. E.g., to implement a 250 Hz low-pass filter for the LFP signal

By using the option format in the configuration structure, we can choose the file format to which the downsampled LFP data will be written. FieldTrip can write the file dataset in several formats (see ft_write_data). We use the Plexon .nex format which provides us the best compromise between data read/write speed and storage capacity. To get more details about the Plexon dataformats, please see the getting started with Plexon data section. The output dataset directory for the LFP data uses the suffix _ds.

The raw .nrd file and the split DMA files contains AD values that are not scaled in uV and require an additional factor of 64x. In addition, our acquisition system includes a Plexon headstage with an additional amplification of 20x. Thus, in our case the calibration should be specified as 1/(64*20).

In FieldTrip the relation between the timestamps and the samples is represented in the header. If you call ft_read_header on your datafile, you’ll see something like this

The hdr.TimeStampPerSample represents the increment of the clockticks per sample of the LFP recording. Another thing to notice is that the timestamp clock starts ticking at the start of the acquisition (when you switch the system on), not on the start of the recording (when you start writing to disk). This means that there is a positive offset in the timestamps (see hdr.FirstTimeStamp).

Samples and timestamps are related to each other according to

Note that timestamps start counting at zero, whereas in MATLAB/FieldTrip convention the first sample of the recording is sample 1.

During acquisition the 16 bit trigger channel is sampled with 32kHz, just like all other channels. Consequently in the .ndr DMA log file there is a “ttl” channel that represents the triggers. The ttl channel is a 32-bit channel, although only 16 of those bits are connected to the trigger input.

After spikesplitting, there is a .ttl file containing the same 32kHz representation of the trigger channel as in the DMA log file. There are also two files (.tsl and .tsh) that represent the lowest and highest 32-bits of the 64-bit timestamp channel. The Neuralynx timestamp channel has a clock rate of 1MHz, i.e. 1e6 timestamps per second, or approximately 32 timestamps per data sample at 32kHz (1e6/32556).

Data sessions that had been subsequently split, downsampled and stored in Plexon .nex format are suitable to be preprocessed for further analysis. To get a general idea of how to proceed, we recommend to read the documentation of the FieldTrip ft_preprocessing function and the preprocessing tutorials in the tutorial documentation . Here, we will focused on how to read the Plexon dataset directories (_ds) which contain multiple .nex files. A basic configuration structure is provided belo

The specification of the dataformat and headerformat options as combined_ds ensures that the appropriate low-level FieldTrip reading function will be called to read the multiple single-channel Plexon .nex files contained in the dataset directory. After preprocessing, we can obtain a data structure like this:

Dealing with changing of channel labels

Neuralynx uses the expression csc (from continuous sampled channel) in addition with a number (e.g., 010) to label the channels. This labels are different from the names assigned to the electrodes in the electrode array. To keep consistency on the labels (this is especially important for plotting the channels), we apply a montage structure that consist of a matrix of correspondences that changes the original labels by the new ones. By using the FieldTrip function ft_preprocessing, with the montage as a part of the cfg option montage, channel labels can be modified.

All montage files for our particular experiment are available upon request. An example of changing the channel labels is provided belo

It is important to note that to change labels in our recordings on Kurt, we use two montages structures. This is because recordings between sessions 17 and 60 headstages were inversely connected to the electrode connectors. In this case, the correct montage file to use is kurt_montage_rename_plx2elec_17_60.mat. After session number 60, headstages were correctly positioned. For later sessions therefore the montage file kurt_montage_rename_plx2elec.mat should be used. These files are available upon request.

Similar to what we described in the last section, re-reference of the signal to a particular electrode or electrode group could be performed using a montage structure and the FieldTrip ft_preprocessing function. We implemented 2 montage structures to be used together with our datasets recording. These files are also available upon request.

To visualize the data, we take advantage of the several specialized plotting functions available in FieldTrip. To obtain a detailed description of the functions and their implementation, please refer to Plotting data in the tutorial documentation section.

Datasets obtained from electrocortigraphic (ECoG) grids might be particular for each recording. Number, position and relation with anatomical number of the electrodes used in a grid might differ completely to the same parameters in another ECoG grid. The FieldTrip function ft_prepare_layout allows the possibility to create a particular layout structures of a electrode grid from an image of the grid. In the following, we will show the layout structures that are currently used in our datasets. These layouts are avalaible upon request.

For example, a schematic layout of the 256 electrode grid might be obtained using the following the function ft_layoutplot: 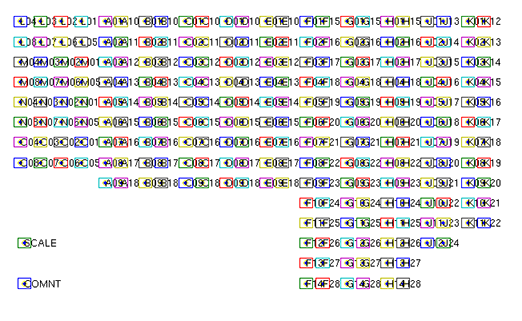 An example of the same layout, containing time-frequency charts at the site of each electrode (obtaining with the FieldTrip function ft_topoplotTFR) is provided below: 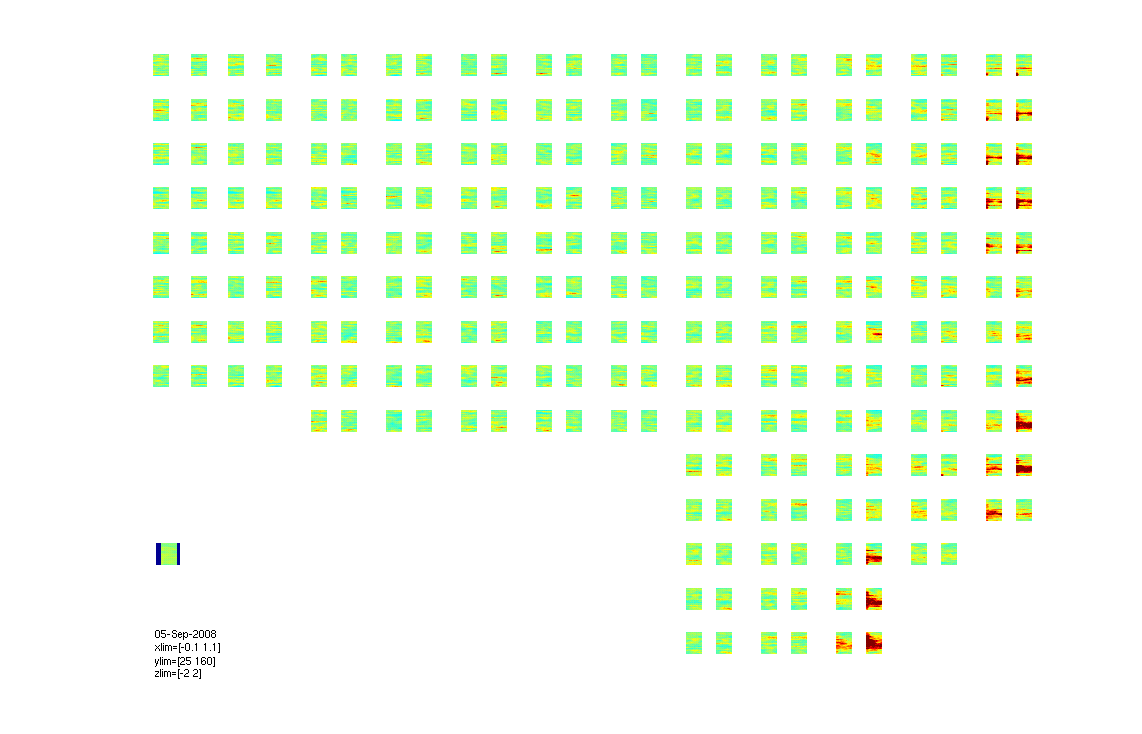