The developers of SPM have a formal collaboration with the developers of FieldTrip on many analysis issues. For example, SPM and FieldTrip share routines for converting data to MATLAB, forward modeling for M/EEG source reconstruction and the SPM12 distribution contains a version of FieldTrip so that you can combine FieldTrip and SPM functions in your custom scripts. SPM and FieldTrip complement each other well as SPM is geared toward very specific analysis tools whereas FieldTrip is a more general repository of different methods that can be put together in flexible ways to perform a variety of analyses.

How does FieldTrip use SPM?

How does SPM use FieldTrip?

Complementary use of both toolboxes

You can also take advantage of both SPM and FieldTrip toolboxes to run a wider range of analyses on an experiment. To convert data from SPM object to FieldTrip structure, you can use spm2fieldtrip and fieldtrip2spm functions as shown in this example:

Let’s have a look at the specific tools available within each of them:

In summary, FieldTrip leaves more freedom to the user with highly customizable tools, while SPM tools are very specific to achieve maximum efficiency. This complementarity is illustrated in the following figure: 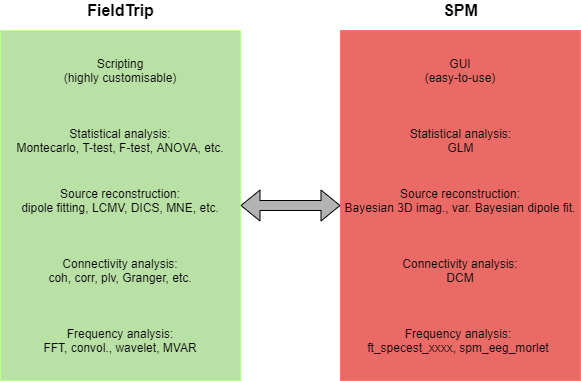 To prevent function name clashes, up to SPM version r4010 from July 2010 SPM8 called its FieldTrip functions via intermediate or ‘wrapper’ functions whose name always started with ft_. Prior to renaming FieldTrip functions according to the same convention this had the advantage that even if there was a different FieldTrip version in MATLAB path from the one used by SPM, SPM only used its own version and incompatibilities could be avoided. From SPM r4010 onward the version of FieldTrip that is distributed with SPM is a ‘light’ version with the same layout and function names as the standalone FieldTrip but without the compat folders, large template files and without some less frequently toolboxes (e.g., classification and real time).

Since the SPM12 M/EEG format as well as its predecessors SPM8/SPM5 format are supported by the fileio toolbox, it is possible to preprocess SPM M/EEG data in FieldTrip the usual way without the need for SPM to be installed. An SPM M/EEG dataset consists of two files with extensions .mat and .dat. The name of the .mat file should be specified as cfg.dataset in ft_preprocessing for the SPM format to be recognized.

The shared infrastructure for head modeling makes it possible to use a head model coregistered with sensors using SPM12 for FieldTrip methods such as beamforming and obtain results with SPM and FieldTrip in the same coordinate system. This facilitates comparison and validation of results obtained with SPM using FieldTrip and vice versa.