This example is contributed by Dr. Cheng Wang.

It is recommended and sometimes even required to provide justification for sample size prior to starting a study and when reporting about it (Clayson et al., 2019). Many researchers use G*Power to estimate the sample size required for their studies. However, although very useful and popular, this software is not suitable for multivariate data or for non-parametric tests. For EEG and MEG we often use a cluster-based permutation test, which is a non-parametric test that exploits the multivariate structure in the data.

Here, we demonstrate two easy-to-use MATLAB functions that use simulations to estimate the sample size for cluster-based permutation tests. These functions can be used for EEG/MEG research involving contrasts between two conditions (paired or independent samples). They were written for, and first used in Wang and Zhang (2021). Please cite this paper where appropriate.

Two demo files demonstrating how to use the functions are in the demo folder:

Power analysis through simulations – an intuitive example of coin-toss

Suppose we are presented with a coin and we want to know whether it is fair (50% chance lands on head). We can test it by running coin-tossing experiments. Consider the following two experiment scenarios. In Experiment 1, we tossed it 2 times, and observed 2 heads; In Experiment 2, we tossed it 5 times and observed 5 heads. With either experiment, we are inclined to think the coin is unfair. But intuitively, we will be more confident of the coin’s unfairness following Experiment 2 than following Experiment 1. But still, we don’t know how sure we are about our decision to call the coin unfair. We can clarify this using inferential statistics.

The power of a statistical test quantifies how sure we can be to decide the coin is unfair (i.e., rejecting the null hypothesis). By definition, we can calculate power by doing the same experiment a large number of times (e.g., 5000 times), and then calculating the proportion of the number of times in which null hypothesis can be rejected to 5000. However, even a simple task such as coin-tossing will be very time-consuming and tedious when you need to repeat it 5000 times. Luckily, we don’t really have to toss a coin, as MATLAB can simulate the results for us. We know the outcome of tossing a coin conforms to a binomial distribution. Using this distribution, we can simulate the outcome of each experiment (i.e., the number of heads out of a certain number of tosses).

First, we need to “guess”, based usually on pilot studies or prior similar studies, the key parameters of the binomial distributions for each of the null and alternative hypotheses. In the current example, the chance of a coin to land on head under the null hypothesis is undoubtedly 50%. And under the alternative hypothesis, we will assume that the coin has a chance of 100% to land on head, based on the result our observations so far. Only with these parameters specified can data be sampled from the distributions. Note that the difference (50% vs. 100%) between the two hypotheses can be construed as the effect size, which has great influence on power: statistical power tends to be greater with larger effect size.

Once you are done with this example, you may want to continue reading this example on estimating and reporting the effect size following a cluster-based test.

Finally, power is calculated as the proportion of the null hypothesis being rejected following a very large number (say 5000) of repetitions of the experiment. Take the current case for example, the outcome of tossing a 100% unfair coin 5 times can be sampled from the binomial distribution, and the results would always be 5 heads. The probability of 5 heads out of 5 tosses under the null hypothesis is 1/(2^5) = 0.0313 < 0.05. So, in all of the 5000 experiments, the null hypothesis is rejected. Thus, the power is 1 = 5000/5000.

All of the above steps can be done using the following block of MATLAB code:

A 100% unfair coin is an extreme and simplified example. You can try other settings in the above MATLAB code and see what you get. For example, if we estimate that the coin has a chance of 55% to land on head, and the sample size is 100, we can estimate the power to be 0.241, which is close to the result from G*Power. 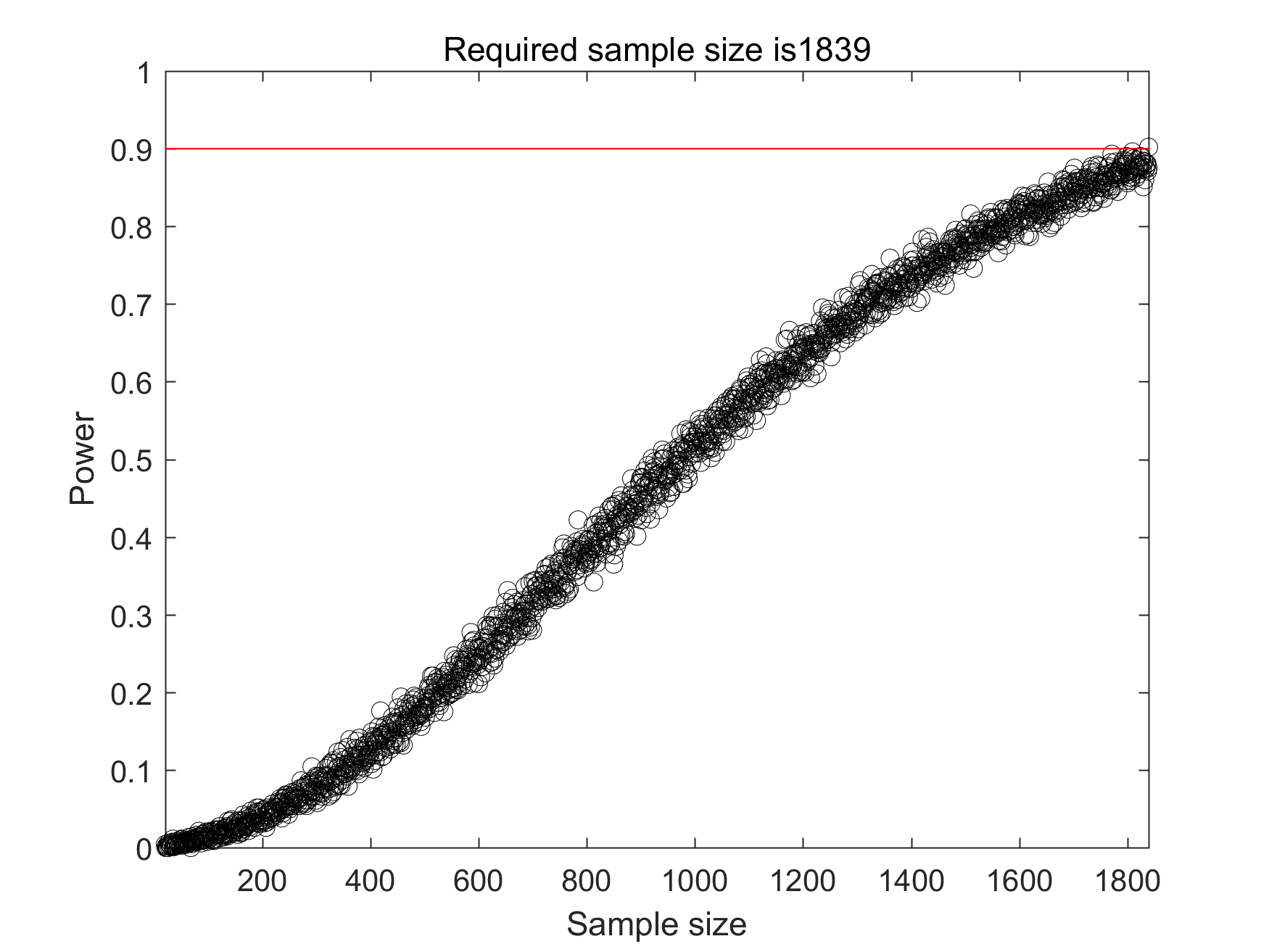 From the above example, we can summarize the basic steps to estimate sample size through simulation:

A more realistic problem that we encounter in our daily research life is comparing two conditions. Suppose we have two conditions of (independent) data, how can we estimate the required sample size through simulations? We can do it following the above four steps.

The following block of MATLAB code implements these steps.

The result shows that the sample size required for 80% power in an independent t-test (means: 3 vs. 4; SDs = 2) is 65, which is very close to the result that we can obtain from G*Power. 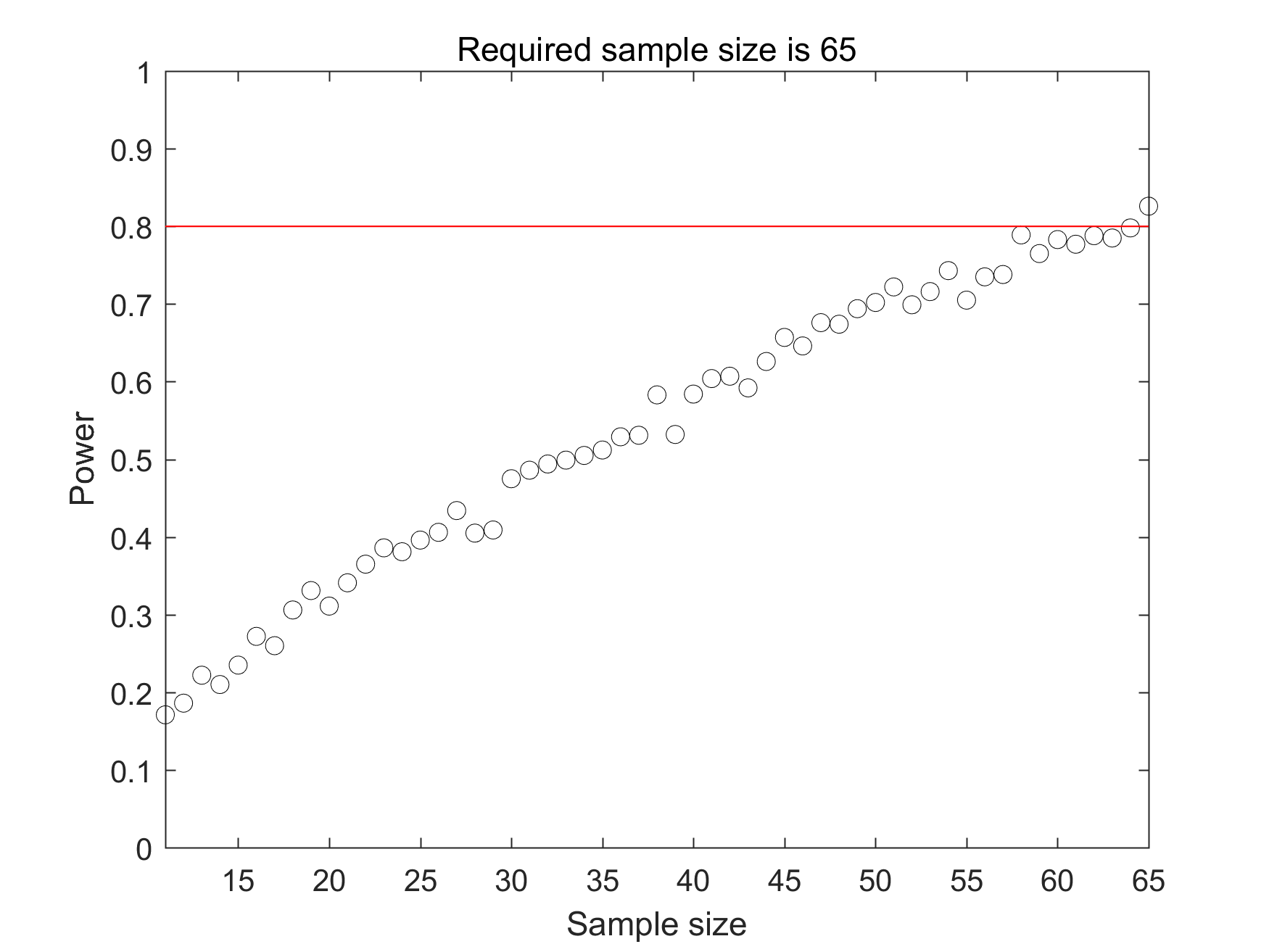 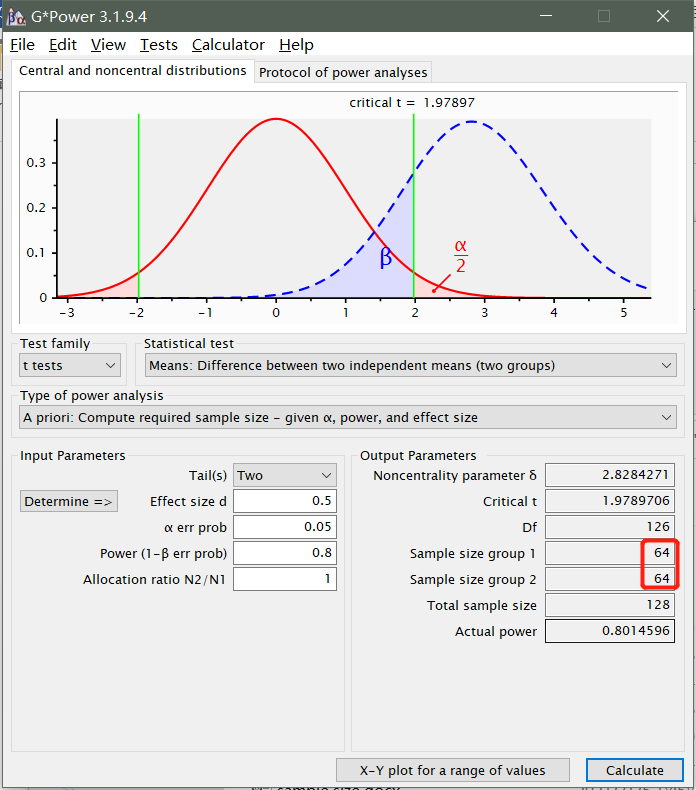 For cluster-based permutation tests in MEG/EEG data, the method of estimating sample size through simulations is the same to that for t-tests, except that Step 3 is somewhat different. In the Step 3 for cluster-based permutation tests, two groups of ERP (2 dimensions: channel×time) or time-frequency (3 dimensions: channel×frequency×time) data are simulated. In each sample of the ERP/time-frequency data, we simulate a cluster of interest with a predefined time window (e.g., 50-250 ms) and frequency band (e.g., 4-8 Hz) in neighboring channels (e.g., C1, CZ, CP1, CPZ). The time, frequency, and spatial ranges of the cluster can be chosen to be similar to those of cluster displaying effect of interest in your pilot studies or prior existing studies. The cluster’s peak values in the two conditions were sampled from two normal distributions (for a between-subject design) or a bivariate normal distribution (for a within-subject design). The means and standard deviations of the distributions can be chosen to be similar to those in prior existing or pilot studies.

Then a cluster-based permutation test is performed on the simulated dataset to test whether there is a significant difference between the two conditions. We run the simulations for 1000 times, and the power is calculated as the proportion of the number of times that the null hypothesis is rejected. These simulations can subsequently be repeated for an incrementally increasing sample size, starting from 10, increasing in steps of 1, until the power reached the desired threshold (e.g., 0.8). The above processing is implemented in the two aforementioned MATLAB functions sampleSize_erp.m and sampleSize_timefreq.m.

Next, we will demonstrate how to use the sampleSize_timefreq.m function; the usage of sampleSize_erp.m is very similar. See also the two demo files.

First, you need to have a time-frequency dataset that is generated by the ft_freqanalysis function in FieldTrip. You can also use the exempleData_timefreq.mat dataset which can be downloaded with the functions from OSF. This dataset is used only for retrieving the data structure for simulating time-frequency data. The sampleSize_timefreq.m function has two parts of parameters, which are respectively stored in cfg and stat_cfg. The structure cfg stores the configurations for simulating the data, and stat_cfg stores the configurations for the cluster-based permutation tests.

Running this function would be quite time-consuming, with a lot of simulations to run. It’s time-saving to open parpool to use parallel computing. The results are stored in res. The following block of code plots the results. 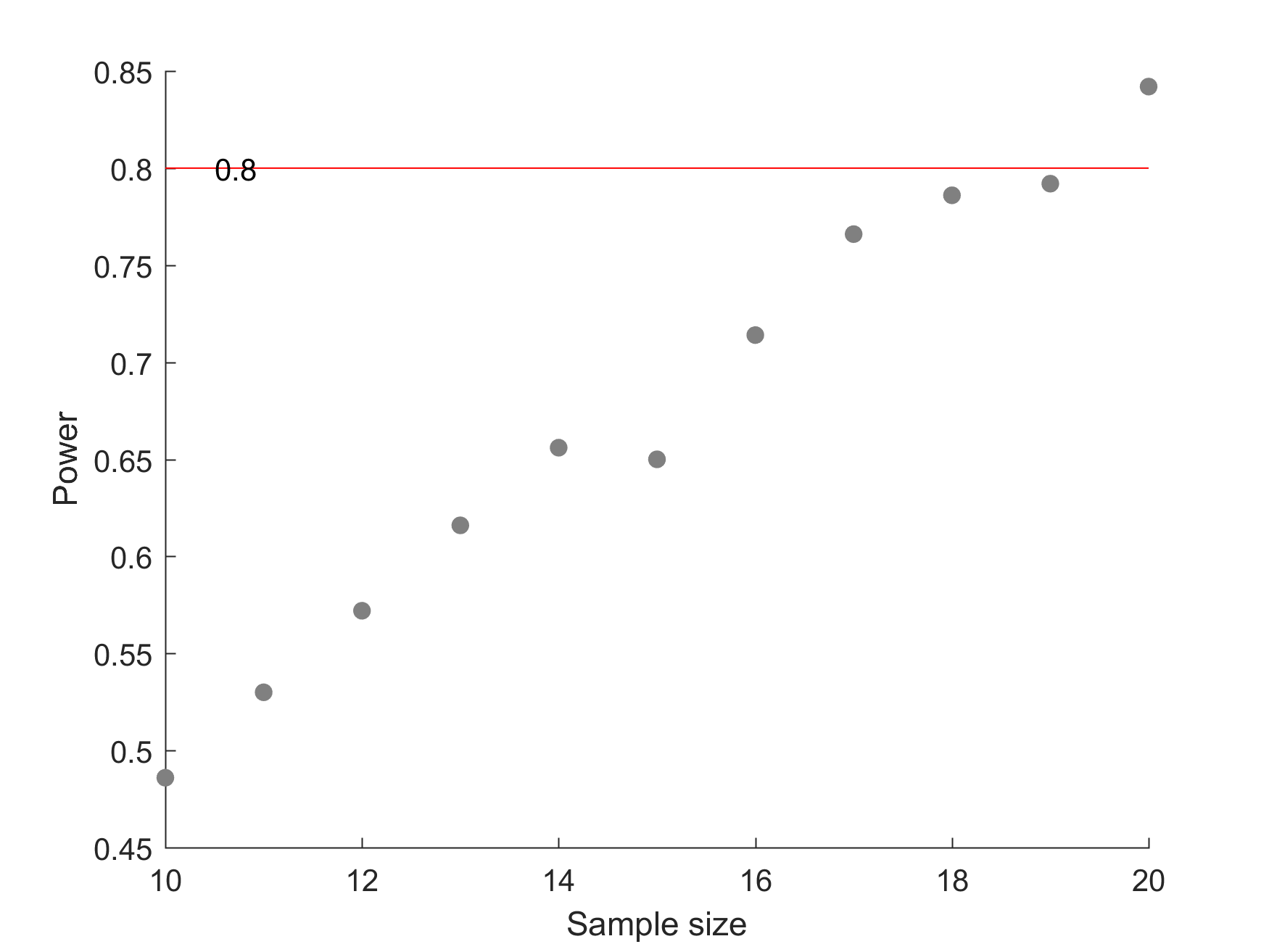 We can also have a look at the simulated data for the required sample size. The datasets for the two conditions are stored in res.condA and res.condB. 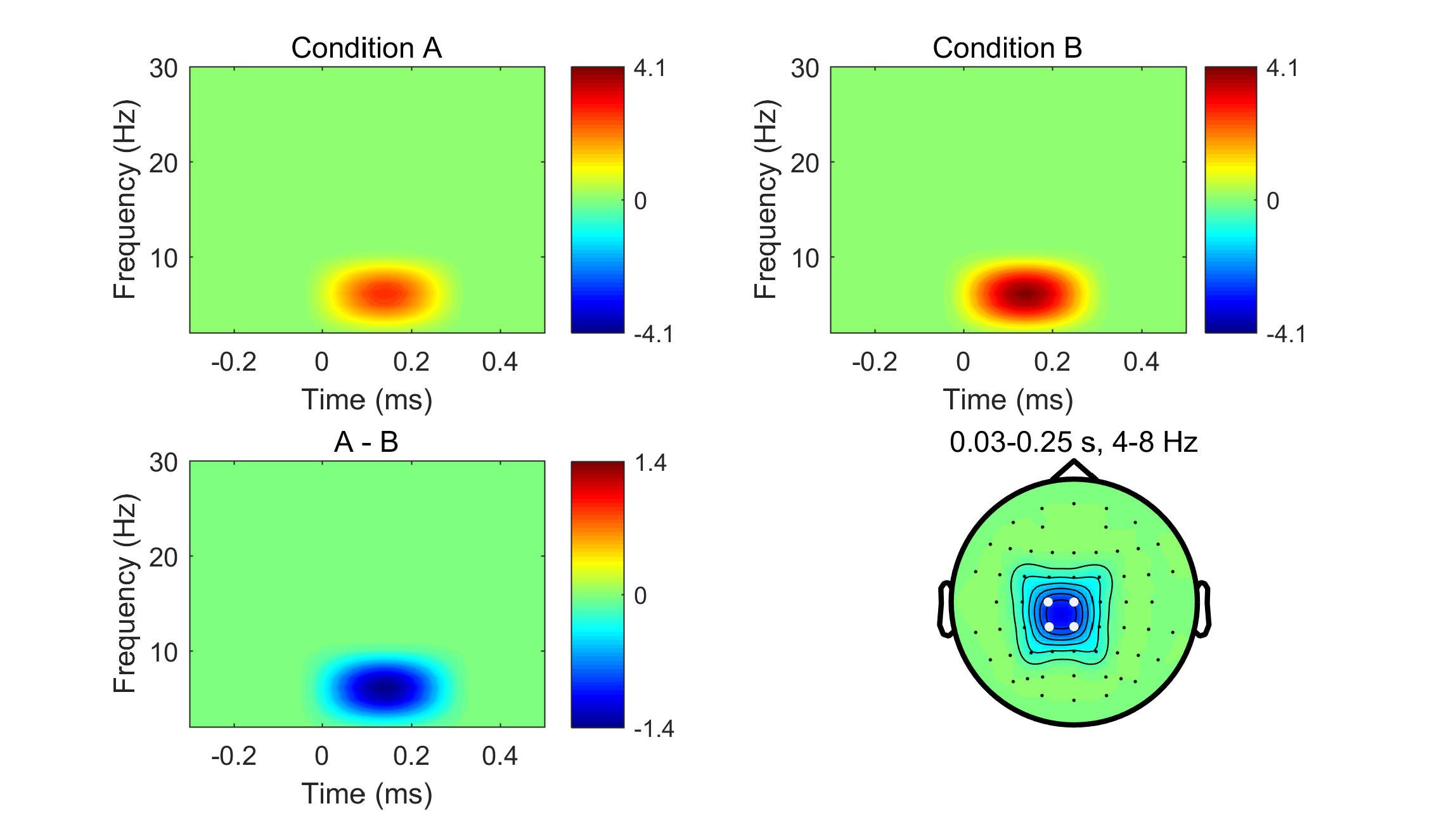