Getting started with EEGLAB

EEGLAB is an interactive MATLAB toolbox for processing continuous and event-related EEG, MEG and other electrophysiological data using independent component analysis (ICA), time/frequency analysis, and other methods including artifact rejection. EEGLAB incorporates and extends the ICA/EEG toolbox of Makeig, and it provides the user with a graphical interface. The homepage of EEGLAB is located at http://www.sccn.ucsd.edu/eeglab/.

How does FieldTrip use EEGLAB?

How does EEGLAB use FieldTrip?

EEGLAB integrates FieldTrip functions through the FILE-IO and the DIPFIT plug-ins.

The DIPFIT plugin allows the localization of the sources that have been separated using ICA. The main function that is used by DIPFIT is ft_dipolefitting. It performs a grid search and non-linear fit with one or multiple dipoles and tries to find the location where the dipole model is best able to explain the ICA component topography, using spherical models or realistic BEM or FEM volume conduction models.

The following figure illustrates some FieldTrip functions used in DIPFIT:

Note that FieldTrip should be added to the MATLAB path in order to use the DIPFIT plug-in.

Complementary use of both toolboxes

Processing data from EEGLAB through FieldTrip functions and vice-versa is made easy by the functions eeglab2fieldtrip and fieldtrip2eeglab. Here is an example code showing how to use those functions: 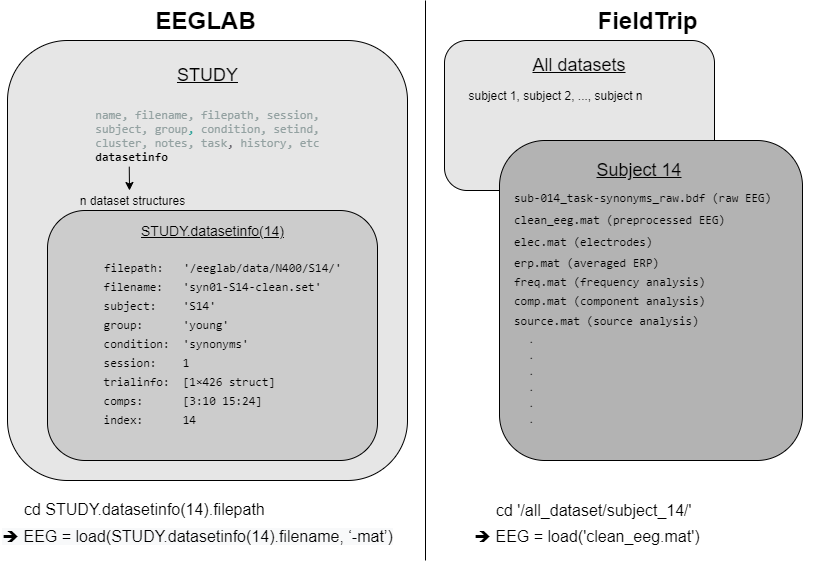 Together with the EEGLAB developers we maintain two functions for converting the data back and forth: fieldtrip2eeglab and eeglab2fieldtrip.