Specifying the channel layout for plotting

The 2D channel layout is a representation of the channel positions, together with the outline of the head or other anatomical features, that allows data to be plotted in a topographically consistent manner on a 2D computer screen (or piece of paper). The 2D channel layout is not an exact representation of the channel positions, just a projection for the purpose of visualization.

The layout is a MATLAB structure with the following elements

Many of the FieldTrip plotting functions use a 2D layout of the channels for plotting. The layout is a schematic 2D representation for displaying the data on the computer screen or in print on paper. The layout results from ft_prepare_layout and can be constructed from

The geometrically most accurate layout representation can be obtained from a 3D representation of the sensor positions as a grad/elec/opto structure. However, projecting 3D sensor positions to a 2D plane always incurs distortion, especially at the edges where the surface is “bending” away from view. Consider for example how the North pole is distorted on a map of the world.

A template layout from disk is easy to use. Furthermore, it has the advantage that care has been taken to add an outline of geometric features (e.g., the ears and nose, or the outline of the MEG helmet) and that a well-fitting interpolation mask (i.e. the region in which the topoplot functions should interpolate) is present. For example the CTF helmet layouts looks much more realistic than what you would get by projecting the 3D sensors onto a 2D place and drawing a circle with nose and ears around it.

If you do not have a measurement of the 3D positions of your sensors, but do have a 2D representation of the sensor array as picture, you can use that to make a layout. Schematic pictures of the electrode arrangements are often available from the website of the vendor of EEG systems or caps.

Sometimes a schematic layout is more convenient, since it “flattens” the head and allows to see all channels better. In the case of iEEG (either sEEG and/or ECoG) electrodes, it can also save a lot of work to locate the electrodes in 3D as explained in the human iEEG tutorial. Furthermore, for sEEG electrodes it can be difficult to come up with a geometrically accurate representation of the channels in 2D space.

Making a layout for MEG sensors

Since MEG sensors are in generally fixed in a rigid helmet inside the dewar, and since the arrangement of sensors is the same for all MEG systemsof the same type (e.g., CTT275, Neuromag306), it is not common to construct individual-subject MEG layouts. Instead, most people will simply use one of the template layouts.

For future OPM-based MEG systems it is more likely that MEG sensor layouts will differ from one subject to another subject. Constructing 2D layouts for OPM based systems can be done similar to the way that they are constructed for EEG systems. If you have the 3D description of the MEG sensors, you can also specify that as cfg.grad into ft_prepare_layout to make a 3D layout.

Creating a layout from sensor positions

Customized MEG layouts can be useful to avoid the distortion due to the projection of sensors in 3D space. For example if you present auditory stimuli to both ears and want to compare the AEF responses on the left and right, you can use the following code to make a layout. 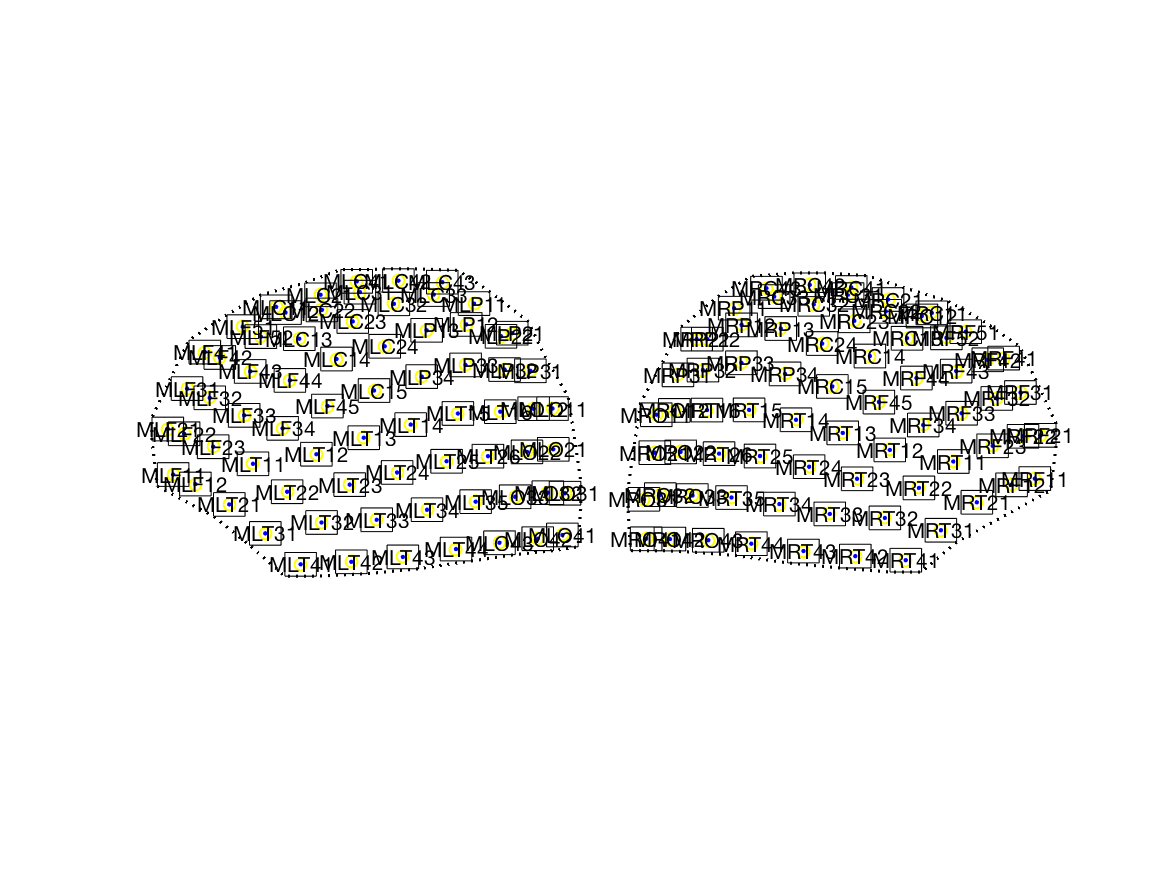 In a similar way you can make a layout that combines a left, right, top, front and back view of the MEG sensors in a fold-out arrangement. 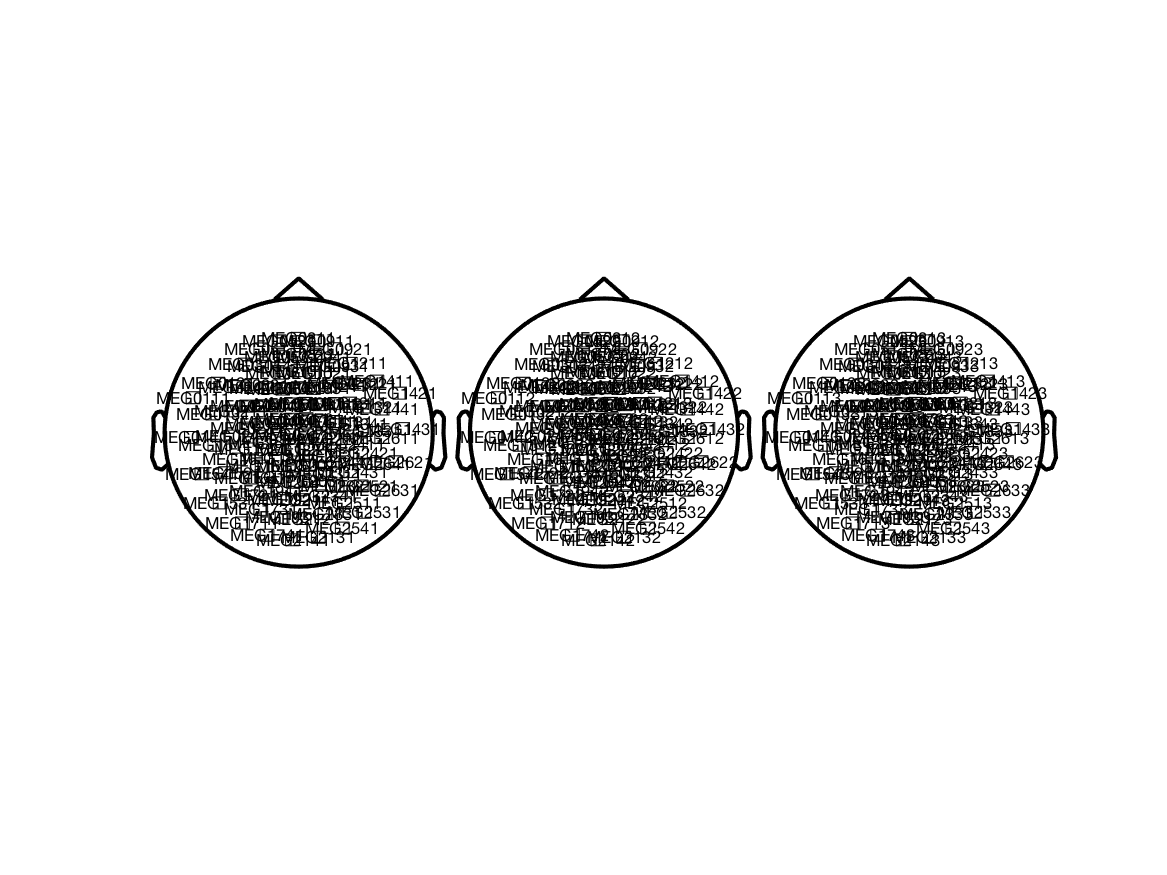 Since the magnetometers and planar gradiometers have different units (T and T/m), the magnitude of the channel level data is quite different. Combined plotting therefore requires that you scale the channels to a similar magnitude. FIXME

Making a layout for EEG electrodes

Many labs use identical (or very similar) EEG caps. Consequently, the template EEG layouts included in FieldTrip cover many cases.

If you have recorded electrode positions, you can use the ft_prepare_layout function to make a layout by projecting the electrodes on the 2D plane.

Creating a layout from an image

You can specify cfg.image in ft_prepare_layout and subsequently click on the location of each electrode. After specifying each electrode location, you’ll be asked to specify the outlines of the head (i.e. the circle around the head, the nose and ears and optionally some lines representing other important landmarks). Finally you will have to specify the mask for the topographic interpolation, this is the same circle around the head (without ears and nose).

Making a layout for iEEG electrodes

The sEEG and ECoG electrodes can be localized in 3D from a CT and/or MRI scan as explained in the human iEEG tutorial. Following the electrode localization, you can make layouts using the orthographic projection method described in step 47 of that tutorial.

The procedure for anatomical coregistration and subsequent localizing of the electrodes explained in the ECoG and sEEG tutorial is based on the paper by Stolk, Griffin et al., Integrated analysis of anatomical and electrophysiological human intracranial data, Nature Protocols, 2018.

Creating a layout from an image

The placement of iEEG electrodes differs from one patient to the next patient. It is common that the neurosurgeon makes a sketch (on paper) of the electrode placement in relation to anatomical landmarks, such as the central sulcus. Or sometimes a surgical photo is taken of the EGoC grid that was just placed on the cortex (see for example Dalal et al. in Journal of Neuroscience Methods 174 (2008) 106–115)). 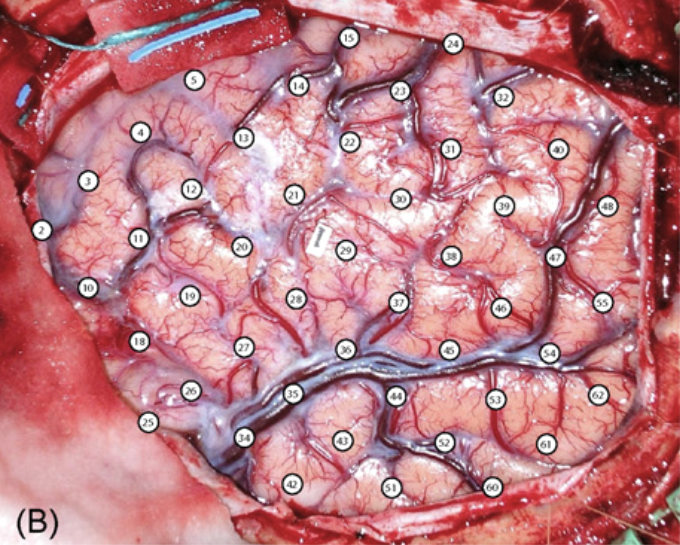 As in the EEG case, you can specify cfg.image in ft_prepare_layout and subsequently click on the location of each electrode. Instead of specifying the complete outline of the head as we usually do in EEG (as a circle), you may want to identify other important landmarks such as the major sulci and the outline of the trepanation.

After creating the layout, you should check and/or manually assign the correct name of the channel labels in the label cell-array. Furthermore, you can place the SCALE and COMNT locations at a convenient place in the figure and modify the width and height of the boxes that are used for multiplotting. You can use ft_layoutplot for a visual inspection of the complete layout. 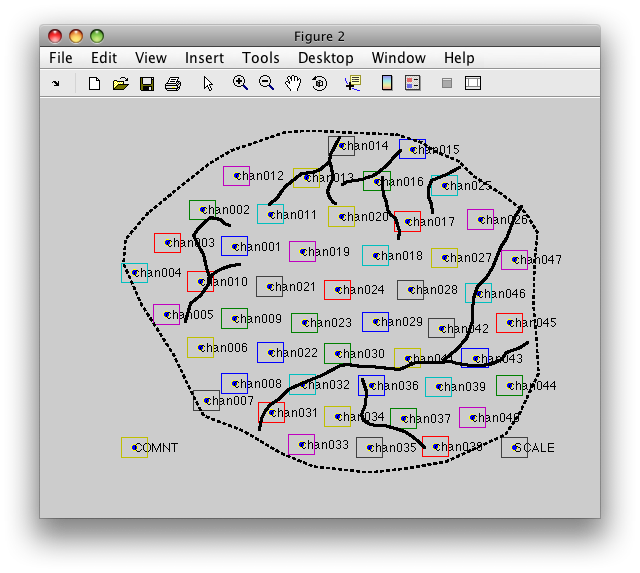 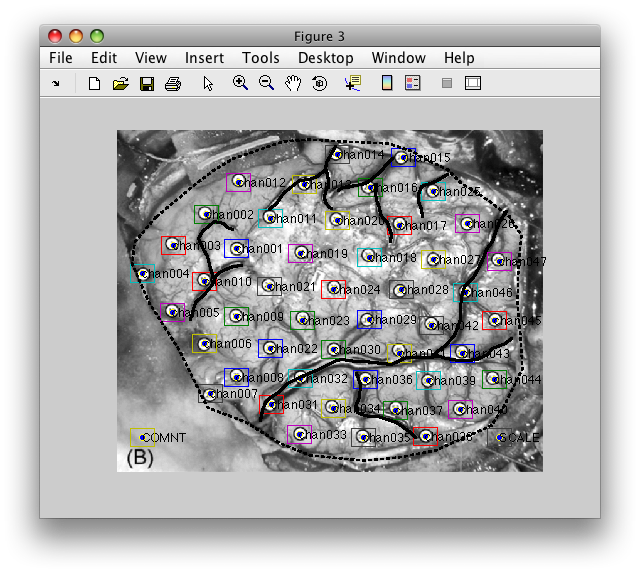 Once you are happy with the result, you can save it to a MATLAB file like this:

The MATLAB file can subsequently be specified as cfg.layout=’layout_ecog.mat’ whenever you need a layout for plotting. Alternatively, you can load the layout in memory and specify the layout like cfg.layout=layout_ecog.

Sometimes you want to construct an iEEG layout prior to doing the full anatomical pipeline, e.g., to check the iEEG data quality and/or whether the expected experimental effects are present in the functional data. You can use ft_prepare_layout in combination with the ft_appendlayout function.

A schematic layout can also be convenient, since it “flattens” the head and allows to see all channels better. Furthermore, for sEEG shafts it can be difficult to come up with a geometrically accurate representation of the electrode contacts in 2D space.

Creating a schematic layout for the sEEG shafts

The ft_prepare_layout function has the horizontal and vertical option for making an N*1 layout. For example

The direction of the electrode contacts along the shaft can be specified as ‘LR’ (left-to-right) or RL for horizontal, and ‘TB’ (top-to-bottom) and ‘BT’ for vertical.

You can also use the raw or processed iEEG data to specify channel names. For example, the dataset used in the ECoG and sEEG tutorial has sEEG electrode shafts that start with the letters LAM, LHH, LTH, RAM, RHH, RTH and ROC. You can download the spectrally analyzed data SubjectUCI29_freq.mat and use the following 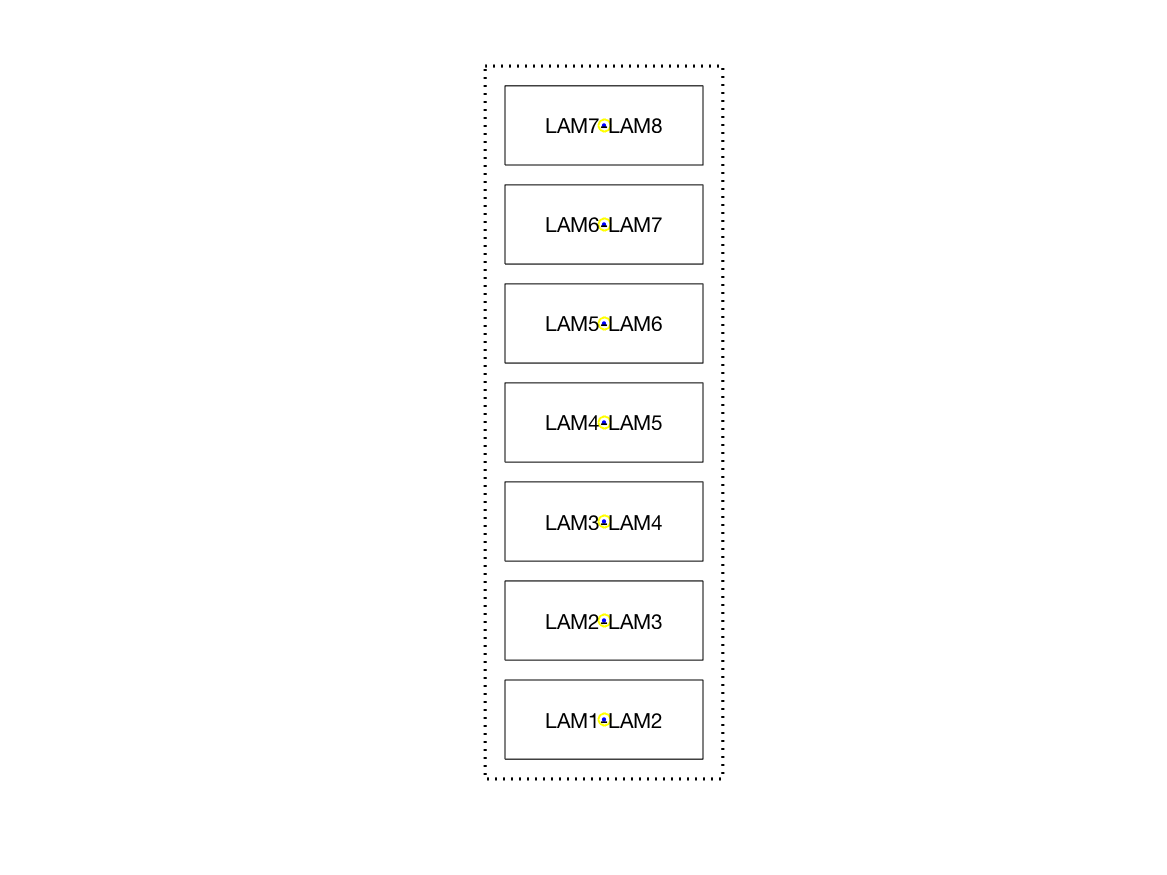 You can combine the layouts using ft_appendlayout like this 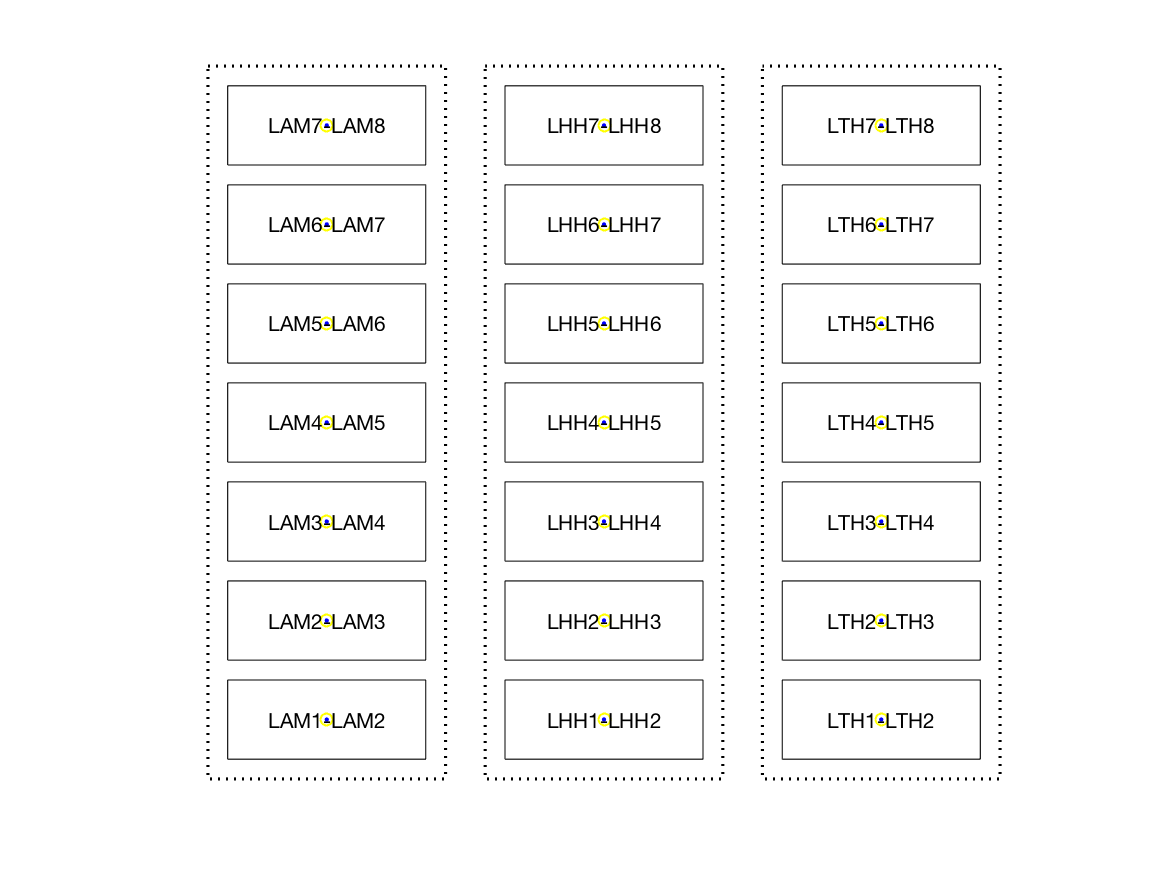 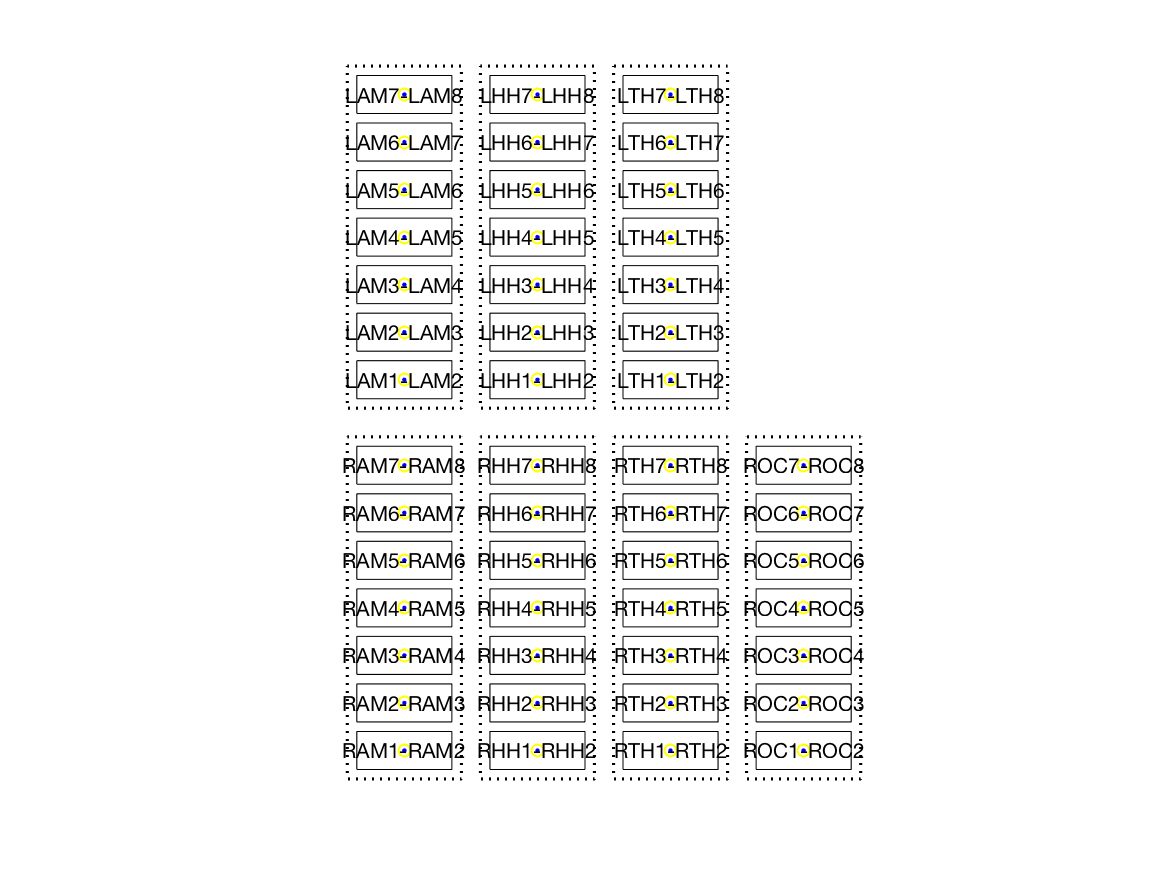 Creating a schematic layout for the ECoG grids 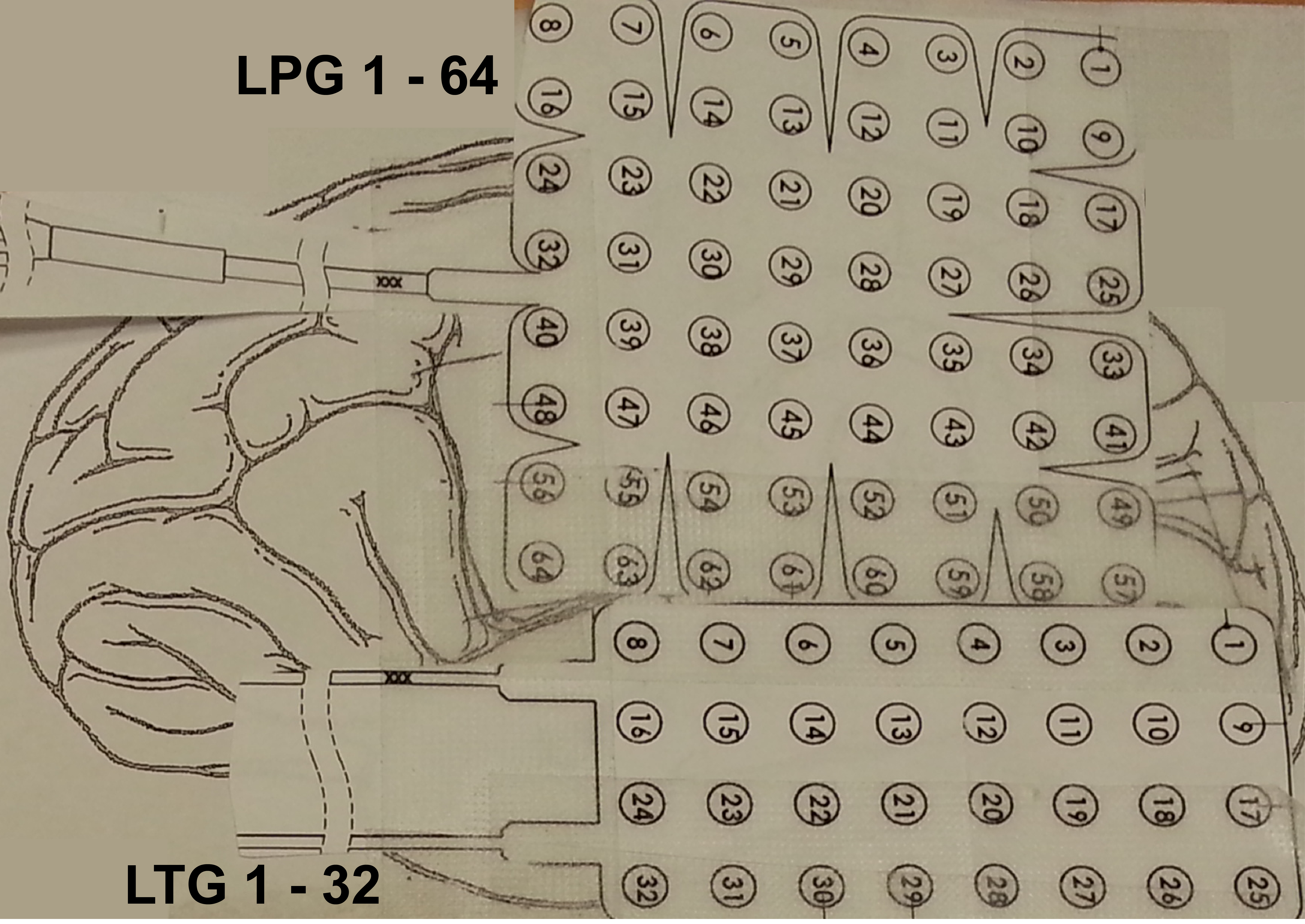 You can construct a layout for these ECoG grids by specifying ‘ordered’ and the number of rows and columns. The channel numbering starts in the upper right corner, hence we specify the direction ‘RLTB’ for right-left-top-bottom. 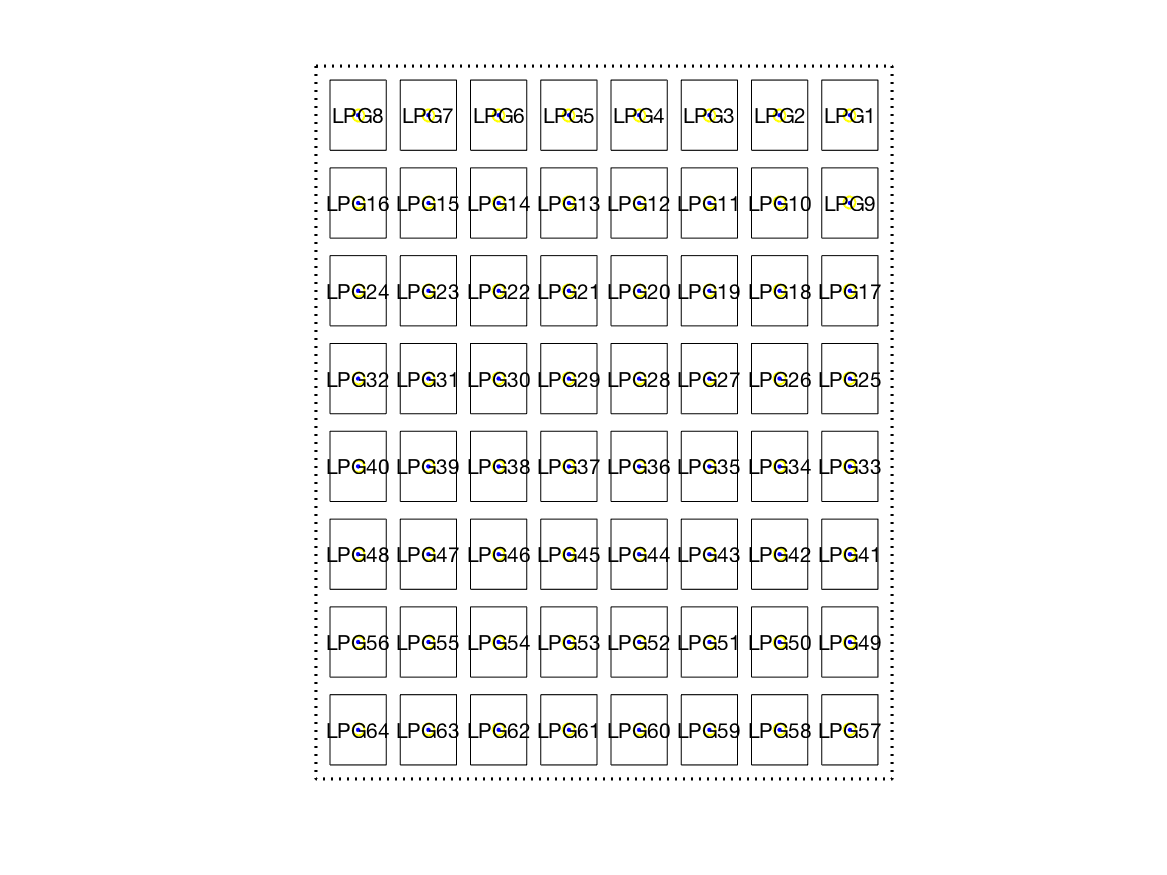 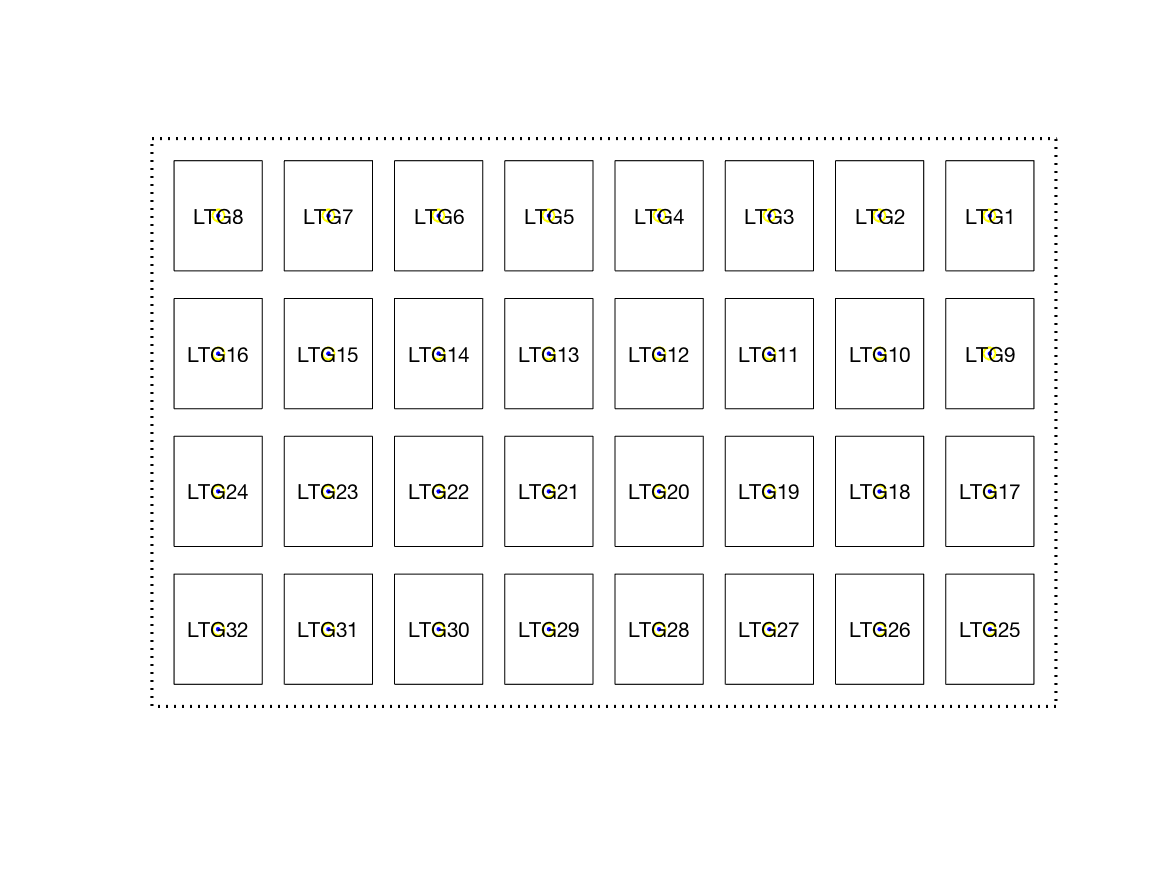 Combine the ECoG and sEEG layouts 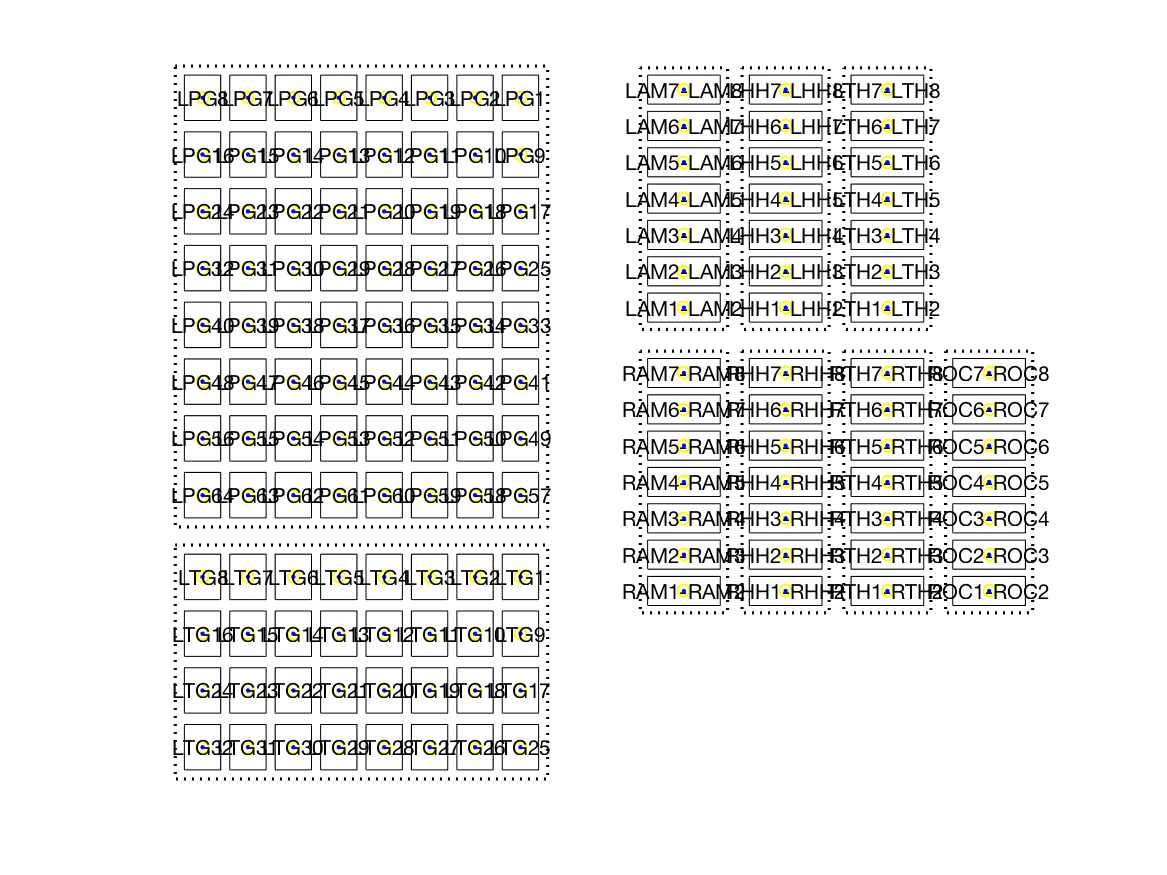 Subsequently you can use the combined layout of the shafts and grids to visualize the results of the ERP or TFR analysis. 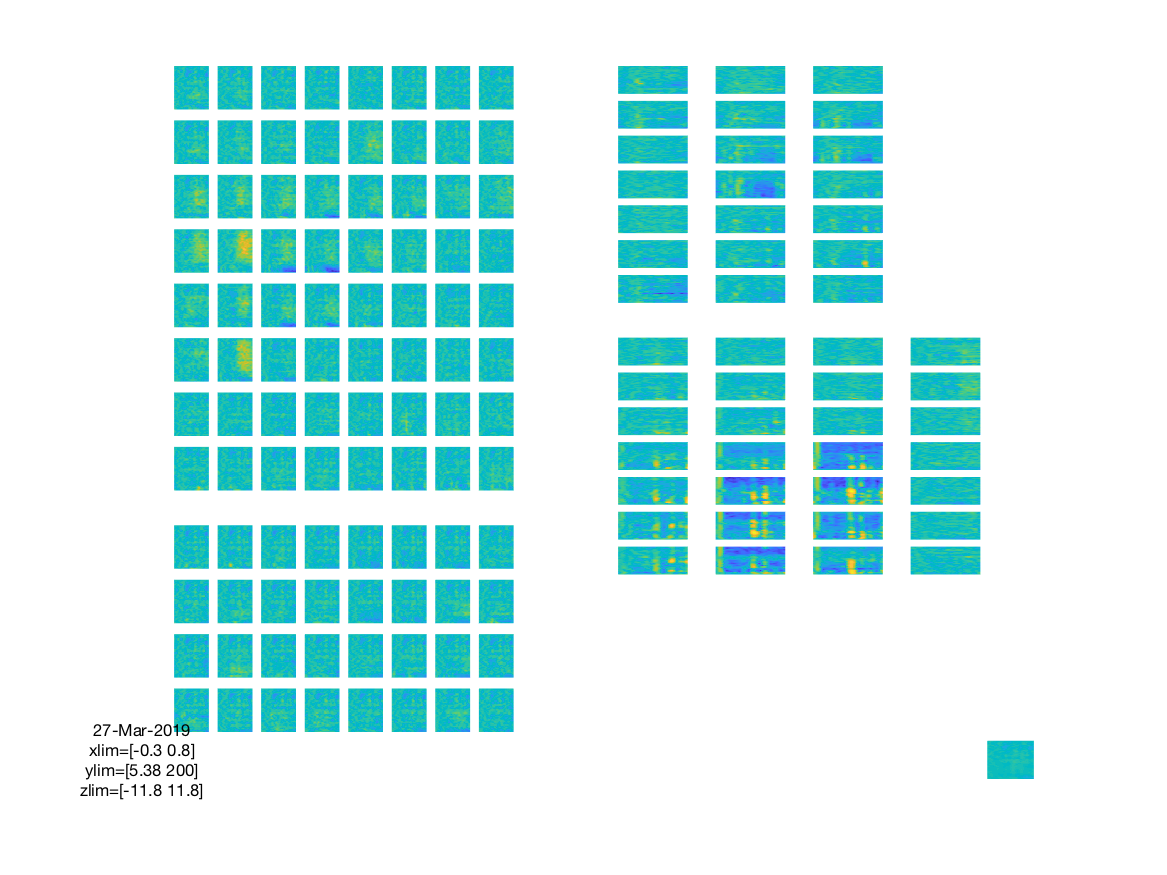 The figure created like this is interactive, like all multiplot figures, and you can make a selection of channels using your mouse and subsequently select a time-frequency range for which a topopgraphy is shown. Please be aware that the topoplot function will interpolate all channels as if they form a continuum. The interpolated values will only be shown withing the masked regions (the dashed lines in the layout plots) around each grid or shaft, but the interpolation will actually cause the values of one shaft to spill over to the next.

Functions that make use of a 2D layout for visualization

Layouts are used in all 2D plotting functions in FieldTrip:

The format of layout files

The layout is represented on disk in ASCII file with the extension .lay, or in MATLAB files that contain a variable with the name “layout” or “lay”. In general, MATLAB layout files are preferred since they allow a detailed specification of the outlines of the head shape (EEG) or helmet (MEG). For ASCII layout files a standard head shape that consists of a circle (for the head) with ears and the nose at the top will be drawn around the normalized channel positions.

Here is a small snippet of an ASCII layout file:

The format of the layout file is described in more detail in this frequently asked question.