MVPA-Light is a stand-alone MATLAB toolbox for multivariate pattern analysis involving classification or regression. It features cross-validation, various classifiers, regression models, performance metrics, as well as nested preprocessing and hyperparameter selection. FieldTrip provides a high-level interface to its functions so one does not need to directly interact with the toolbox. However, it needs to be installed and included in MATLAB’s search path. To this end, follow the installation instructions on its GitHub page.

We will use classifiers to analyze the MEG-language dataset which features one subject with three types of trials: fully incongruent (FIC), fully congruent (FC), and initially congruent (IC). These three classes are stored in different files available here: dataFIC_LP.mat, dataFC_LP.mat and dataIC_LP.mat.

The data can be loaded into MATLAB using

To get started, we investigate whether we can discriminate between the three classes FIC, FC, and IC, using the average activity in the 0.5-0.7 s post-stimulus interval.

After this, we will focus on two out of the three classes, namely FIC vs FC, and we will investigate the following questions:

Note that the classification is performed for a single subject using single trials.

Classification in the 0.5-0.7 s interval

We will use ft_timelockstatistics to determine the classification accuracy between the three classes FIC, FC, and IC. As features, the average activity in each MEG channel in the the 0.5-0.7 s interval is used. In each trial, this yields 149 features for the classifier, one feature per MEG channel. Let us first determine the number of trials in each class:

Let us unpack this:

to perform the classification analysis. It is important to make sure that the order of class labels (FIC, FC, IC) matches the order that the datasets are passed in to ft_timelockstatistics. It is not required that each class is contained in a separate dataset. The same result can be achieved when all classes are part of one dataset dat. To illustrate this, append the data and then pass it to ft_timelockstatistics:

Looking at the diagonal of the matrix tells us that the classifier is better at predicting classes 1 and 2 than it is at predicting class 3. For a simple visualization of this result, we can use a plotting function in MVPA-Light called mv_plot_result. It takes the result structure returned in stat.mvpa which contains the classification results in a format required by the function. 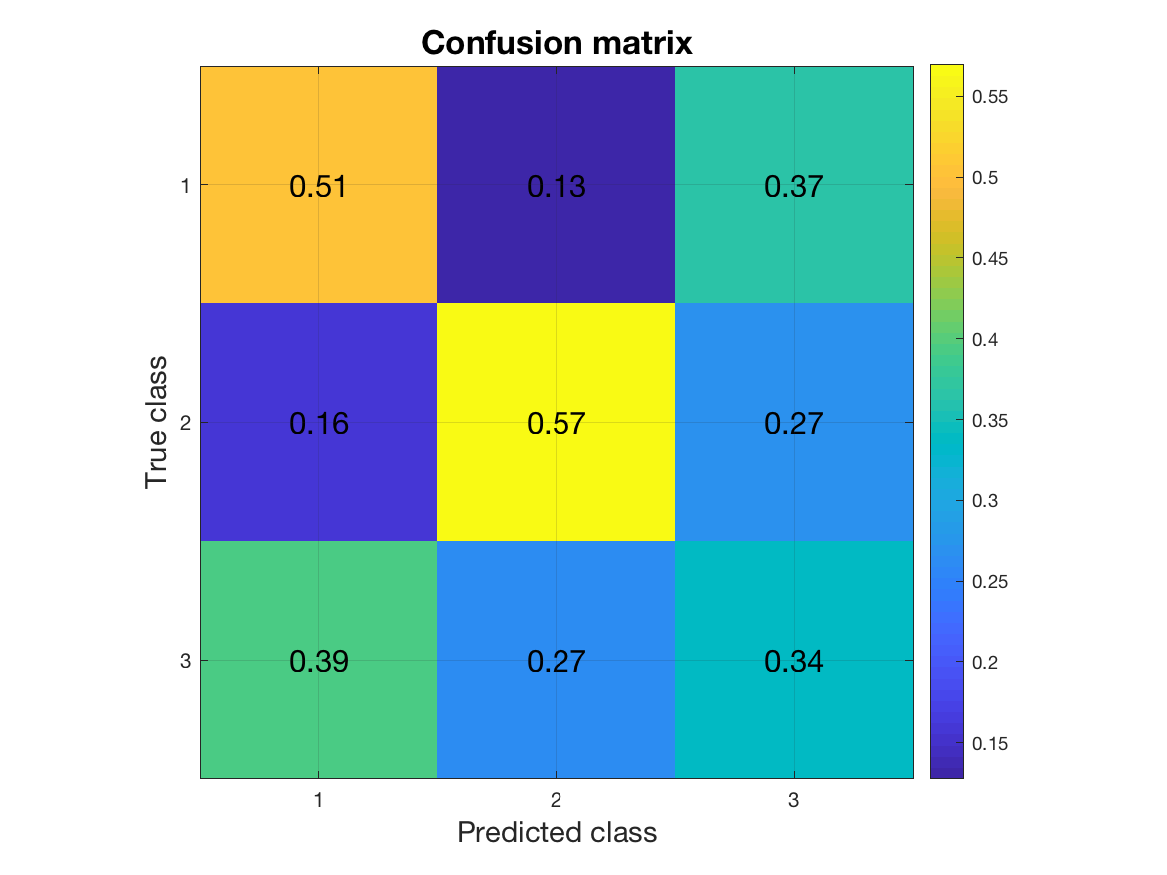 To obtain a realistic estimate of classifier performance and control for overfitting, a classifier should be tested on an independent dataset that has not been used for training. In most neuroimaging experiments, there is only one dataset with a restricted number of trials. K-fold cross-validation makes efficient use of this data by splitting it into k different folds. In each iteration, one of the k folds is held out and used as test set, whereas all other folds are used for training the model. This process is repeated until every fold has been used as test set once. Other cross-validation schemes supported by MVPA-Light are leave-one-out cross-validation, holdout, and predefined folds. Cross-validation is controlled by the following parameters:

For k-fold cross-validation, the total number of training and testing iterations is equal to cfg.k * cfg.repeat. The result returned by ft_timelockstatistics is always the average across all test folds and repetitions.

What is the effect of setting k to a very large vs very small value? Why is it useful to repeat the cross-validation multiple times? (hint: samples are randomly assigned to folds)

Search across time (‘when’)

Many neuroimaging datasets have a 3-D structure [trials x channels x time]. Classification across time can help identify the time points in a trial when discriminative information shows up. To this end, classification is performed for each time point separately. First, we need to make sure that the time dimension is not averaged out. We can set cfg.avgovertime = 'no', but since the default value is 'no' we can simply omit this parameter.

For simplicity, we will limit ourselves to comparing only FIC and FC. As classifier, we use Linear Discriminant Analysis (LDA). As metric, we use area under the ROC curve (AUC). It is calculated using 10-fold cross-validation with 2 repetitions.

Note that the metric is now a vector with 900 values, one AUC value for each time point in the trial. It can be plotted as a function of time using

For a slightly nicer plot, one can again use mv_plot_result. As a second parameter, we pass the time values to make sure that the x-axis is formatted correctly.

The resultant plot shows AUC across time in the trial. The shaded area is the standard deviation of the AUC metric across the different test sets in the cross-validation. 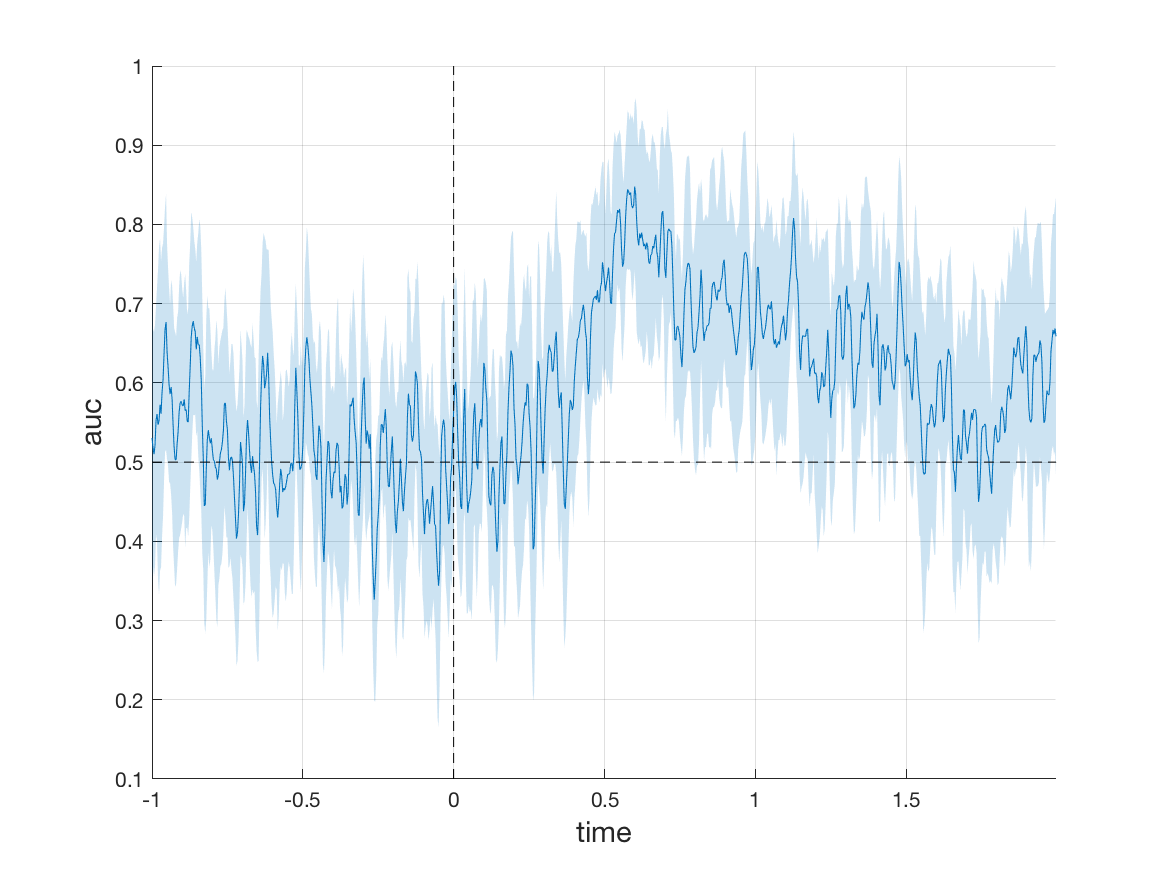 Search across channels (‘where’)

Which channels contribute most to classification performance? The answer to this question can be used to better interpret the data or to perform feature selection. To this end, we will perform a separate classification analysis for each channel.

Since a classification result is obtained for each channel, classification accuracy can be plotted as a topography. We call ft_topoplotER to do the plotting. 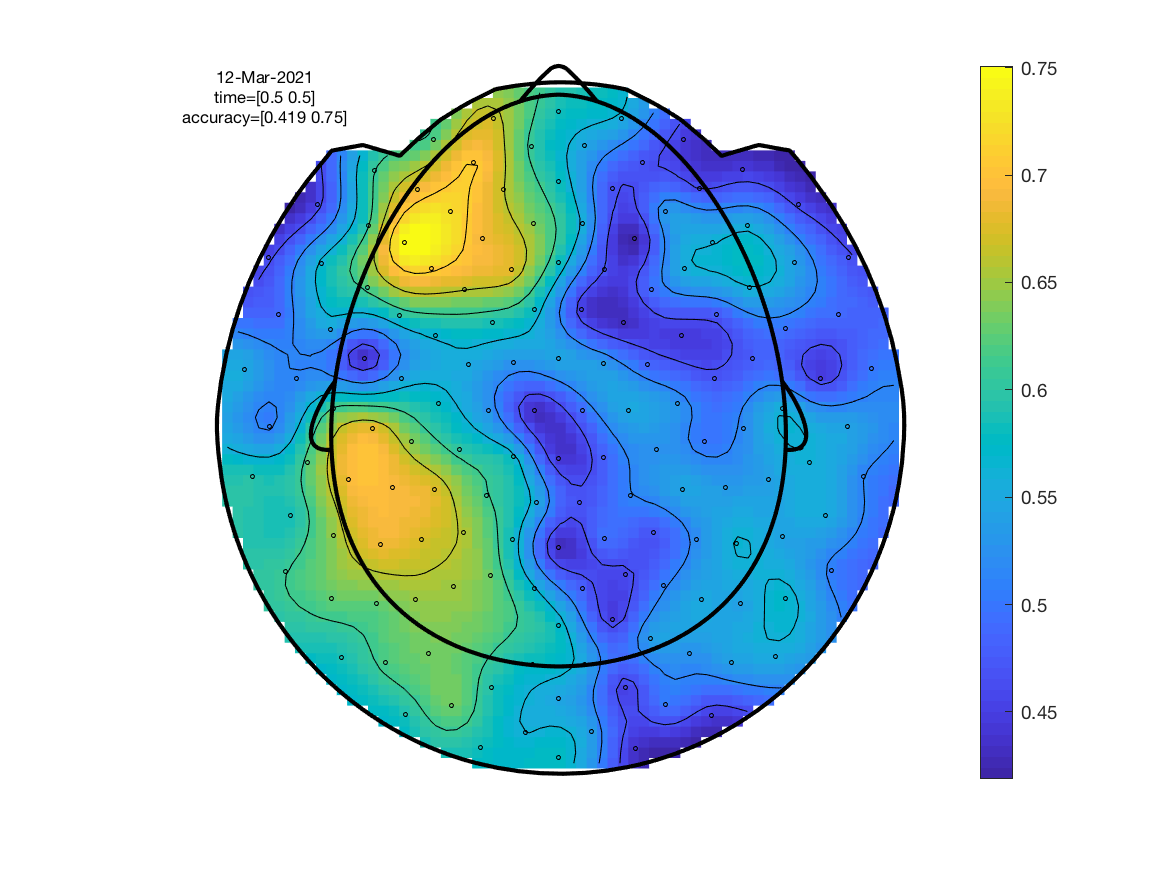 Although we set cfg.features = 'time', there was acually only one time point since cfg.avgovertime='yes'. To use the multiple time points as separate features, repeat the analysis setting cfg.avgovertime = 'no'. This time, for each channel, all time points in the 0.3-0.7 s window are used as features rather than just their average. The maximum performance should increase slightly.

In the previous analysis, classification has been performed for each channel separately. However, the spatial arrangement of MEG channels can be exploited in order to group neighbouring channels as features in the searchlight. To build the neighbourhood structure, we use ft_prepare_neighbours.

We are now ready to re-run the searchlight analysis. We can pass the neighbourhood structure via the parameter cfg.neighbours.

Call ft_topoplotER to plot the result as a topography.

As expected, the resultant topography is slightly more smeared out. Peak classification accuracy is higher which is due to the classifier now combining information across neighbouring channels. 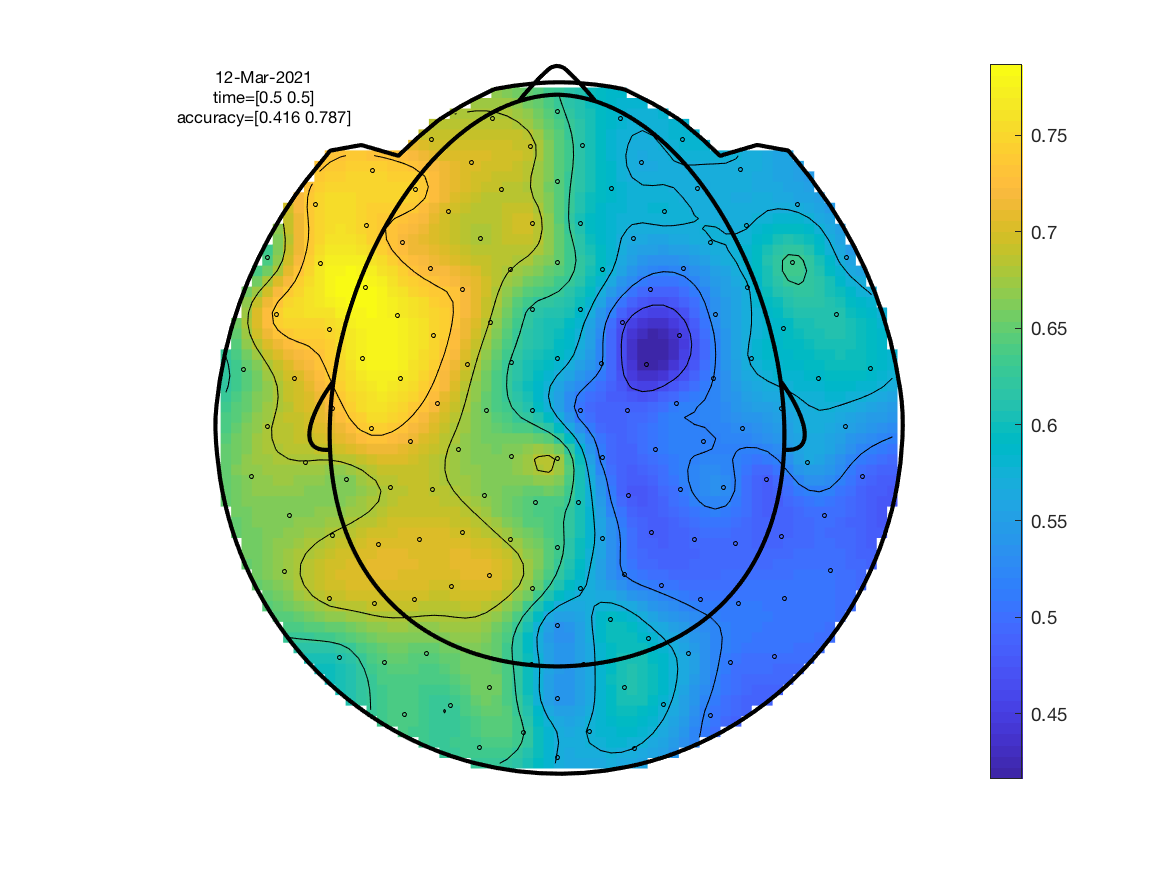 Search across both time and channels

In this case, both channels and time points act as search dimensions and the result is a [chan x time] matrix of classification accuracies. If we plot the result, we can see which of the channels carry discriminative information and when. 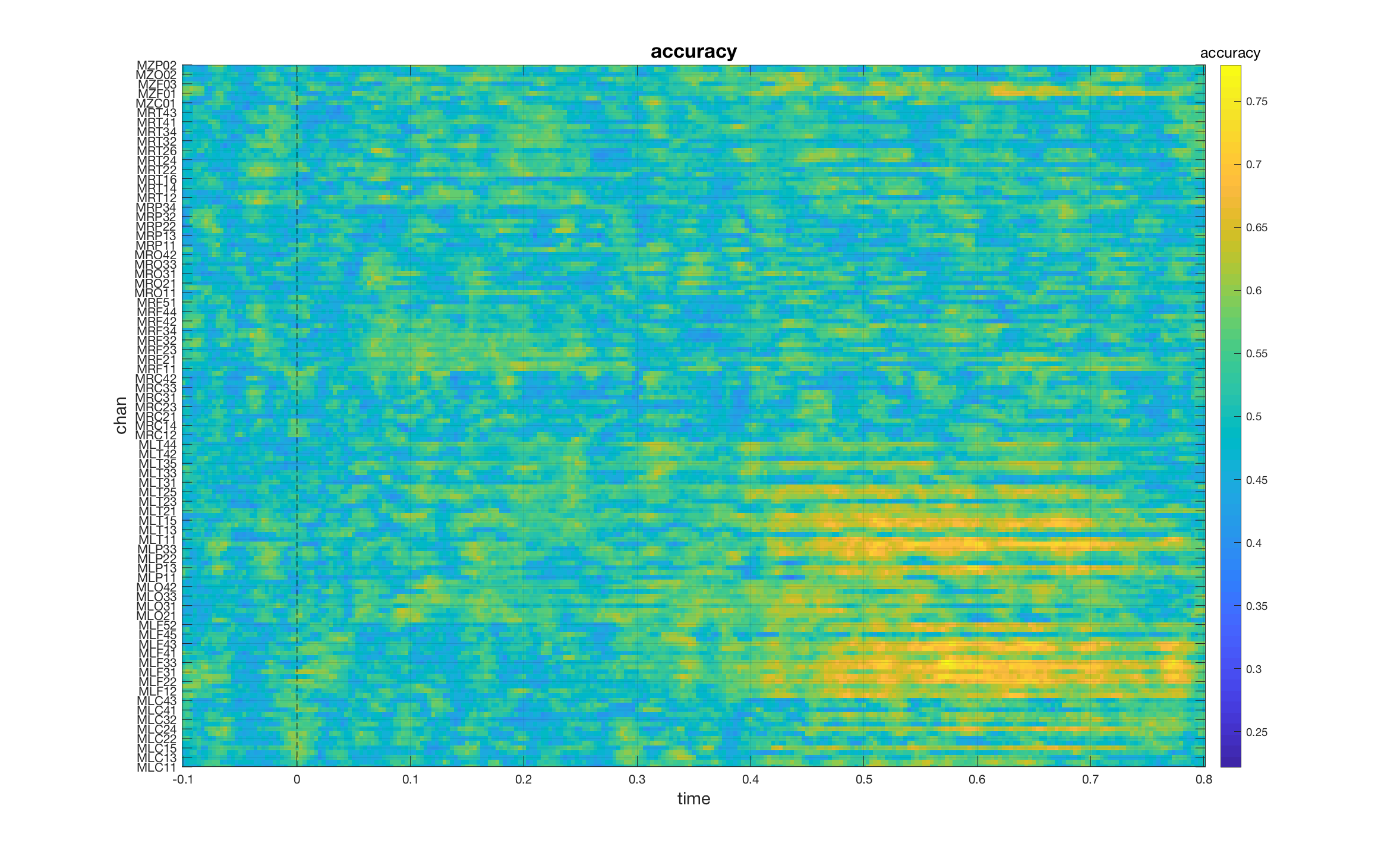 Classification across time does not give insight into whether information is shared across different time points. For example, is the information that the classifier uses early in a trial (t=80 ms) the same that it uses later (t=300ms)? In time generalization, this question is answered by training the classifier at a certain time point t. The classifier is then tested at the same time point t but it is also tested at all other time points in the trial (King and Dehaene, 2014). This procedure is then repeated for every possible training time point. To perform time x time classification, we need to set the cfg.generalize parameter: 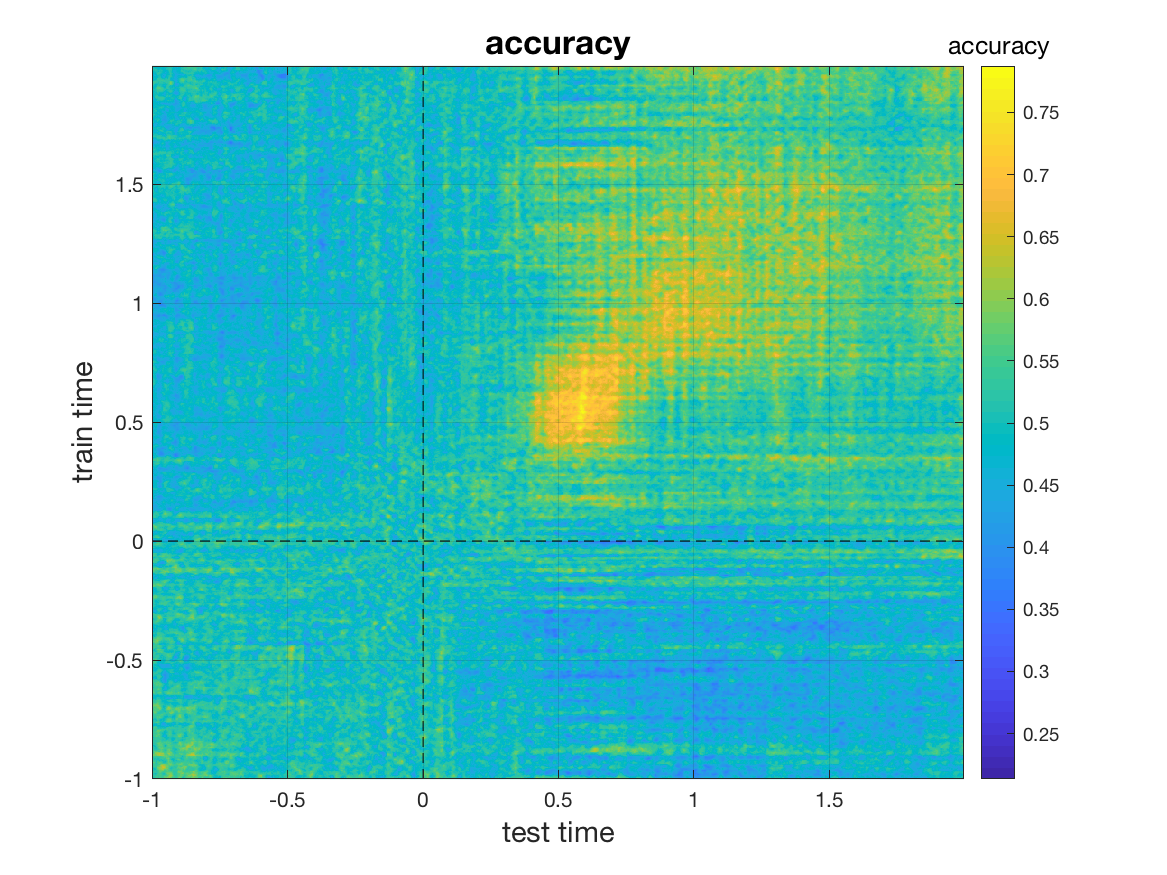 We aim to perform classification for each time-frequency point separately using channels as features. To this end, we only need to set cfg.features = 'chan'. 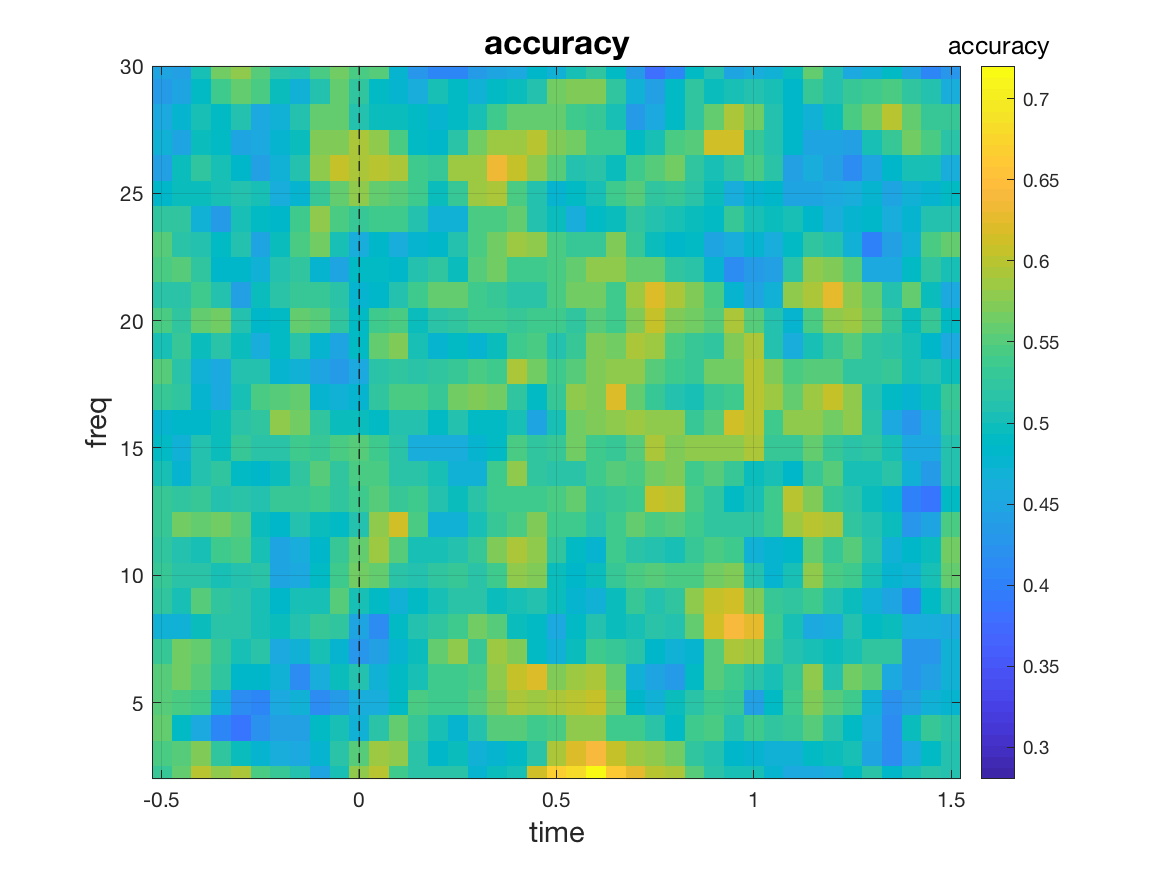 This yields a [freq x time] matrix of classification accuracies. However, we are not limited to a classification for every time-frequency point. A large array of different multivariate analyses can be realized by changing the value of cfg.features. Let us look at some of the options:

Building on the previous example, perform a classification analysis for every frequency bin. To this end, use channels and time points as features.

Similar to what we did in the ‘where’ analysis, we can control the size of the searchlight by specifying neighbouring channels/times/frequencies for each of the search dimensions. As an example, let us run an analysis across frequencies and time, this time taking into account neighbouring time points as well. To this end, we set cfg.timwin = 5 which means that a total of 5 time points is considered in each analysis: the given center time point and its two immediately preceding and following time points. Including neighbouring channels/frequencies/time points increases the dimensionality of the feature space. In this example, the feature space has the dimension 149 (channel) x 5 (time points) = 745. A larger feature space provides more information to the classifier but it also is more computationally demanding and potentially holds the danger of overfitting. 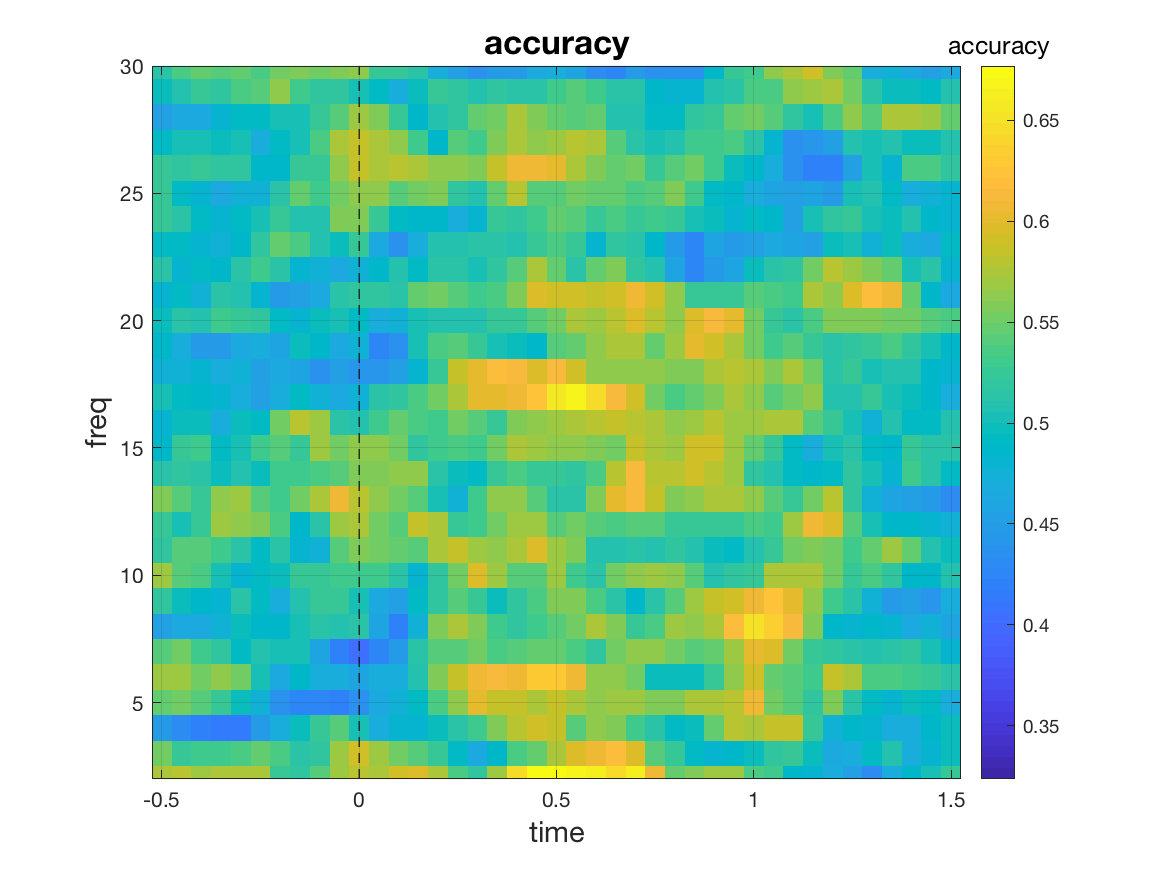 Note that setting cfg.timwin is only useful if time is not used as features, and the same logic applies to cfg.freqwin (for frequencies) and cfg.neighbours (for channels).

In the previous analysis we considered 5 time points in each analysis. Instead, now consider 5 frequencies by setting the cfg.freqwin parameter accordingly. Use mv_plot_result to visually confirm that this leads to smoothing along the frequency axis.

See train_svm for a full list of SVM hyperparameters and their default values. To give another example, in LDA the lambda parameter controls the amount of regularization of the covariance matrix. The default value 'auto' is usually sufficient but we can also set it to a specific value:

See train_lda for a full list of LDA hyperparameters and their default values.

For SVM, define a polynomial kernel of degree 3. Refer to train_svm to find the corresponding names for the two hyperparameters you need to set.

In this example we look into preprocessing pipelines. Preprocessing includes demeaning, z-scoring, PCA, sample averaging, feature extraction methods such as PCA, and any other approaches that operate on the data prior to training.

It is important to distinguish between global vs nested preprocessing. In global preprocessing, an operation is applied to the whole dataset (including both train and test data) at once before classification is done. This holds the possibility of information transfer between train and test set, since the operation applied to the train data is affected by the properties of the test data.

To perform nested z-scoring, we add the following line

Nested z-scoring means that the means and standard deviations are calculated on the train data and then applied to both train and test data. This assures that no information from the test set flows into the processing of the train set. The available preprocessing functions are listed in the preprocess folder on the GitHub page. You can specify an operation by omitting mv_preprocess_. For instance, the file mv_preprocess_demean corresponds to the string 'demean'. We can follow up the z-score with a Principal Components Analysis (PCA) by providing both strings as a cell array

Preprocessing functions also have parameters that control their behaviour. For instance, in PCA the number of PCs is such a parameter. Its default value is 20. Studying the help of the PCA function

we see that the parameter n controls the number of PCs. To change it, you can use the cfg.preprocess_param field. Since our preprocessing pipeline contains two operations cfg.preprocess_param is a cell array with two elements. PCA is the second preprocessing operation, so we need to set the second cell. We can provide parameters as key-value pairs. For instance, to set the number of PCs n = 10 we write:

Finally, let’s carry out the analysis.

The understanding preprocessing tutorial on the GitHub page covers preprocessing in more detail. Although the tutorial uses MVPA-Light directly, not through its FieldTrip interface, you can translate the code into FieldTrip by replacing all instances of cfg.preprocess by cfg.mvpa.preprocess.

In this tutorial, we explored the usage of MVPA-Light for the classification of time-locked and time-frequency data. By setting the parameters cfg.features and cfg.generalize cross-validated multivariate analyses can be flexibly designed. We further investigated the setting of hyperparameters and the construction of a nested preprocessing pipeline.