Preprocessing of EEG and MEG data

This tutorial describes how to define epochs-of-interest (trials) from your recorded EEG-data, and how to apply the different preprocessing steps. This tutorial also shows you how to average your data for a specific experiment (electric wrist stimulation on the right hand).

This tutorial contains the hands-on material of the BACI workshop and is complemented by this lecture.

The remainder of this tutorial explains the second approach, as that is the most appropriate for large data sets such as the MEG data used in this tutorial. The approach for reading and filtering continuous data and segmenting afterwards is explained in another tutorial.

Preprocessing involves several steps including identifying individual trials from the dataset, filtering and artifact rejections. This tutorial covers how to identify trials using the trigger signal. Defining data segments of interest can be done

Both depend on ft_definetrial. The output of ft_definetrial is a configuration structure containing the field cfg.trl. This is a matrix representing the relevant parts of the raw datafile which are to be selected for further processing. Each row in the trl matrix represents a single epoch-of-interest, and the trl matrix has 3 or more columns. The first column defines (in samples) the beginpoint of each epoch with respect to how the data are stored in the raw datafile. The second column defines (in samples) the endpoint of each epoch, and the third column specifies the offset (in samples) of the first sample within each epoch with respect to timepoint 0 within that epoch. The subsequent columns can be used to keep information about each trial.

If you do not specify your own triallfunction, the 4th column will by default contain the trigger value. When you use your own triallfunction, you can add any number of extra columns to the trl matrix. These will be added to the data in the .trialinfo field. This is very handy if you want to add information of e.g., response-buttons, response-times, etc., to each trial. As you will see, we will use this functionality to preprocess both the standard and deviant tones together, and then separating them later for averaging.

Description of the experimental data

For the source reconstruction workshop we recorded a single subject to allow you to work through all basic steps involved in EEG/MEG analysis: from event-related averaging to forward and inverse problem.

Primary somatosensory cortex (SI) is part of the postcentral gyrus of the human brain. SI consists of Brodmann areas 1, 2, and 3.

Here, the response of interest is the well-known P20/N20 complex (or component) which is generated in area 3b (part of the Brodmann areas 3). The generators of this area are mainly focal not too deep and mainly tangentially oriented (Allison et al. 1989).

Estimation of the P20/N20 component

The median nerve of the subject’s right wrist was stimulated using square electrical pulses with 0.5 ms duration. The stimulus strength was adjusted to see a clear movement of the thumb. The inter-stimulus interval was varied randomly between 350 to 450 ms to avoid habituation and to obtain a clear pre-stimulus interval. A reduction in stimulus artifacts was achieved by reversing the polarity of the stimulation during the second half of the measurement.

The EEG system records event-triggers in separate channels. These channels are recorded simultaneously with the data channels, and at the same sampling rate. The onset can therefore be precisely timed with respect to the data. The following trigger codes can be used for the analysis we will be doing during the worksho

The following steps are taken in the EEG section of the tutorial:

Reading and preprocessing the interesting trials

We start with the trial definition using ft_definetrial and ft_preprocessing.

We will filter the data using ft_preprocessing around the frequency spectrum of interest and eliminate the power line noise before calculating the SEP/SEFs with ft_timelockanalysis.

In the data structure of data_meg/data_eeg we see it still contains elec/grad. With the following code we remove elec/grad from the structure, otherwise we encounter problems in the later step of processing.

We will use ft_rejectartifact to clean the data of bad trials (and perhaps channels). We use only the ‘zvalue’ criterion to eliminate bad trials (or channels). You can play around with other criterion where you can reject trial. 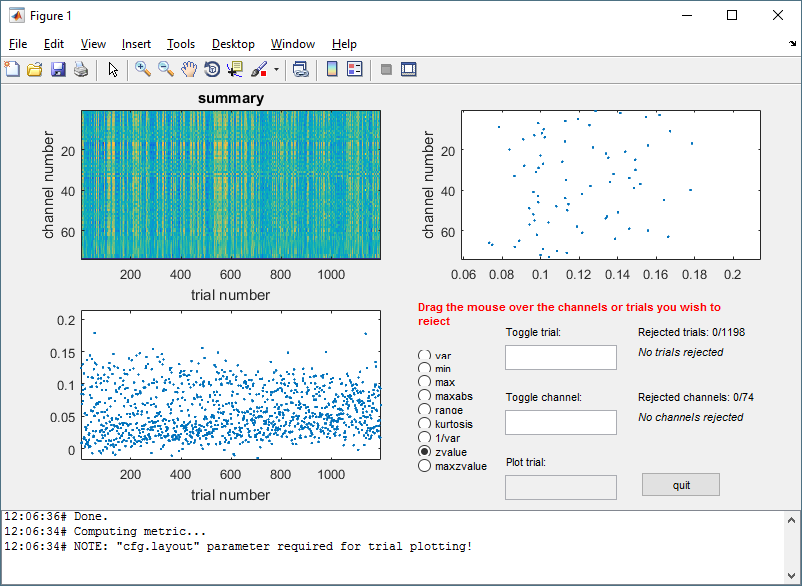 The function ft_timelockanalysis averages all the trials into a single trial. It requires preprocessed data, i.e. what we just did.

The trials belonging to one condition will now be averaged with the onset of the stimulus time aligned to the zero-time point. This is done with the function ft_timelockanalysis. The input to this procedure is the data structure generated by ft_preprocessing.

Don’t forget to save the time locked data.

Global Mean Field Power (GMFP) is a measure first introduced by Lehmann and Skandries (1979), used by, for example, Esser et al. (2006) as a measure to characterize global EEG activity.

GMFP can be calculated using the following formula (from Esser et al. (2006))

where t is time, V is the voltage at channel i and K is the number of channels.

FieldTrip has a built-in function to calculate the GMFP; ft_globalmeanfield. This function requires timelocked data as input. We will use similar preprocessing as applied in Esser et al. (2006).

Plotting the results of EEG and MEG

Using the plot functions ft_topoplotER and ft_multiplotER you can plot the average of the trials. You can find information about plotting also in the Plotting data at the channel and source level tutorial. Furthermore, we use the below script to visualize single trial with global mean field power and we find the time of interest and we save it together with the EEG_avg. 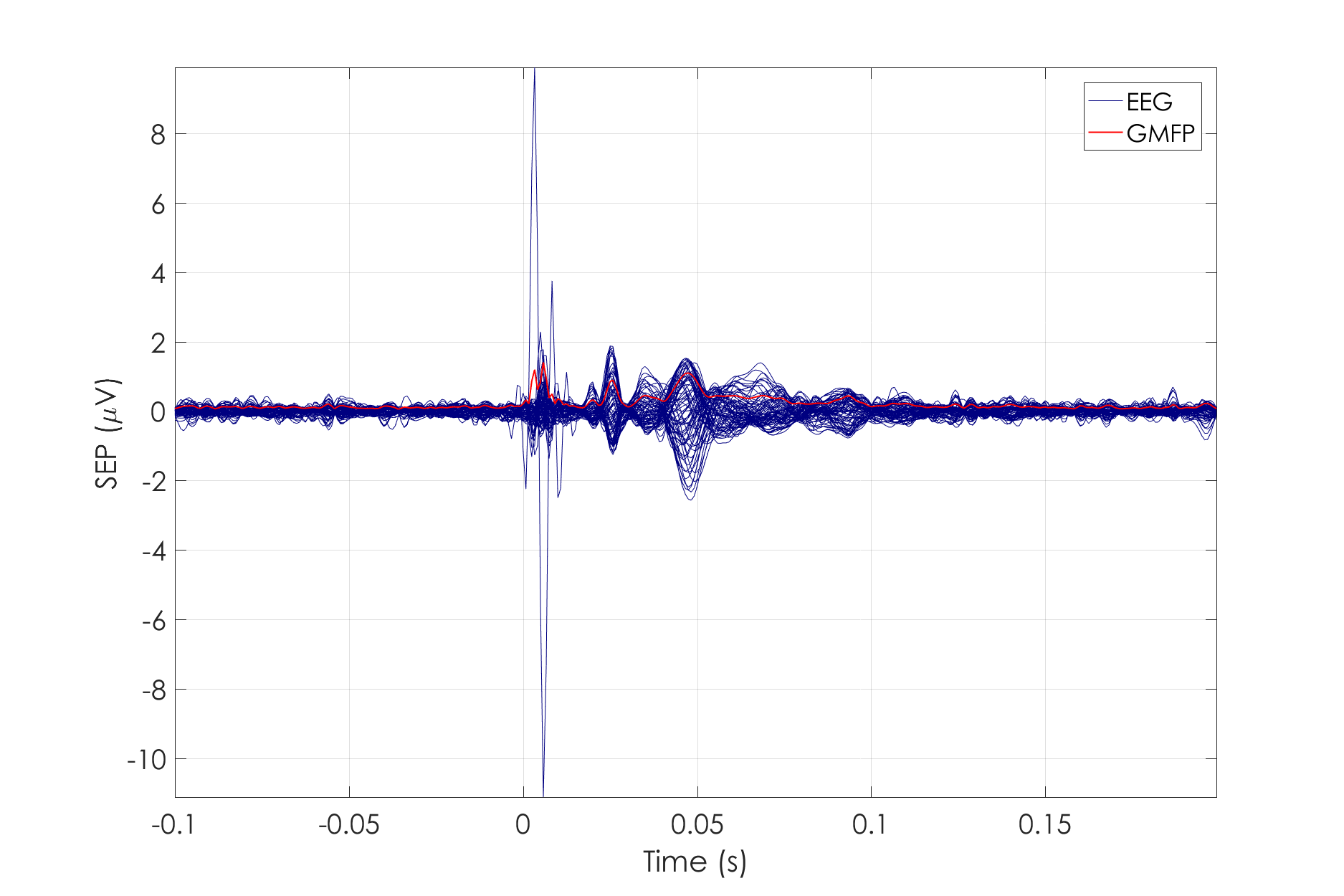 We set up values to create the image you observe before for EEG. 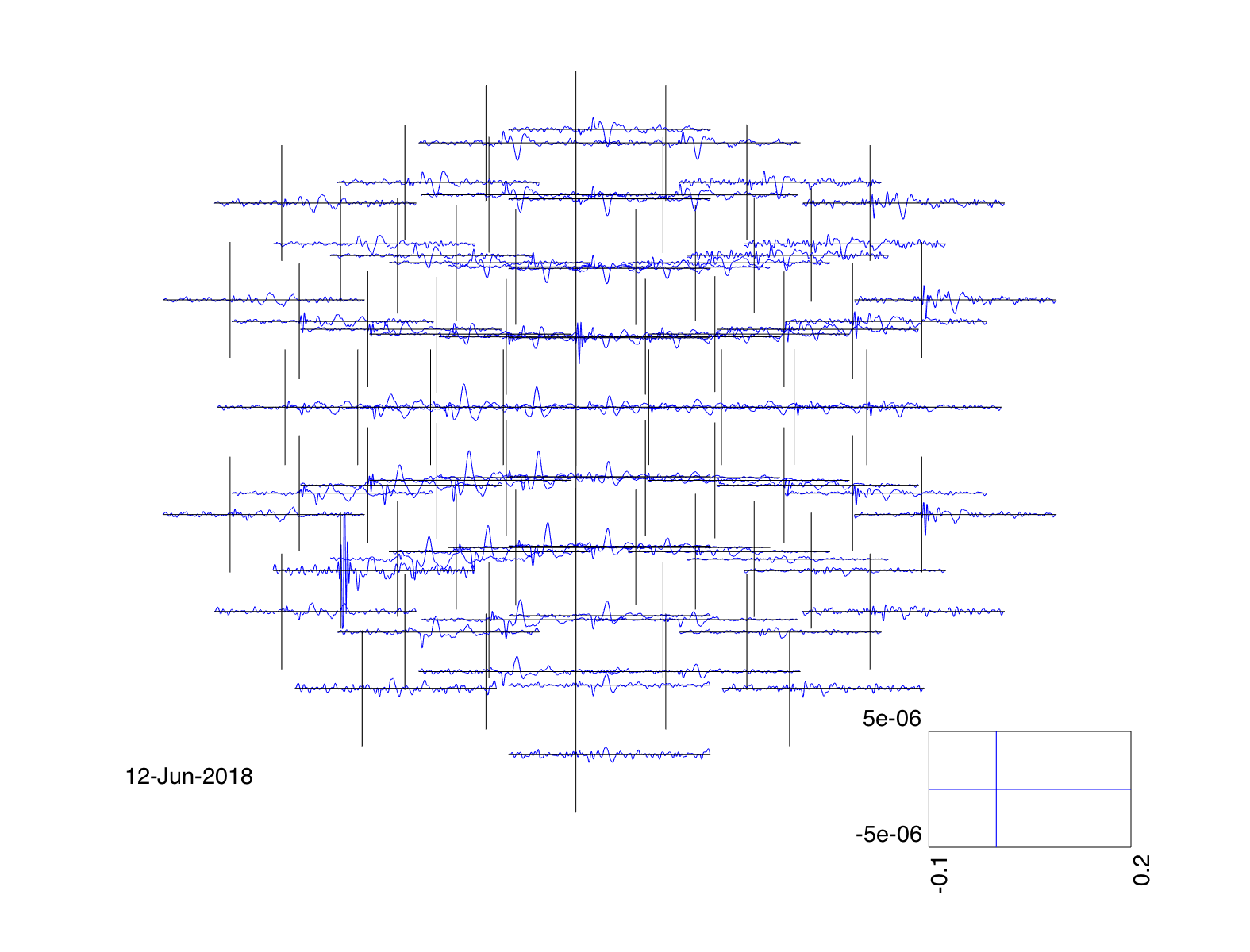 Figure 4: Use of ft_multiplotER for representation of the single trial according to the EEG cap.

And now we create it for MEG 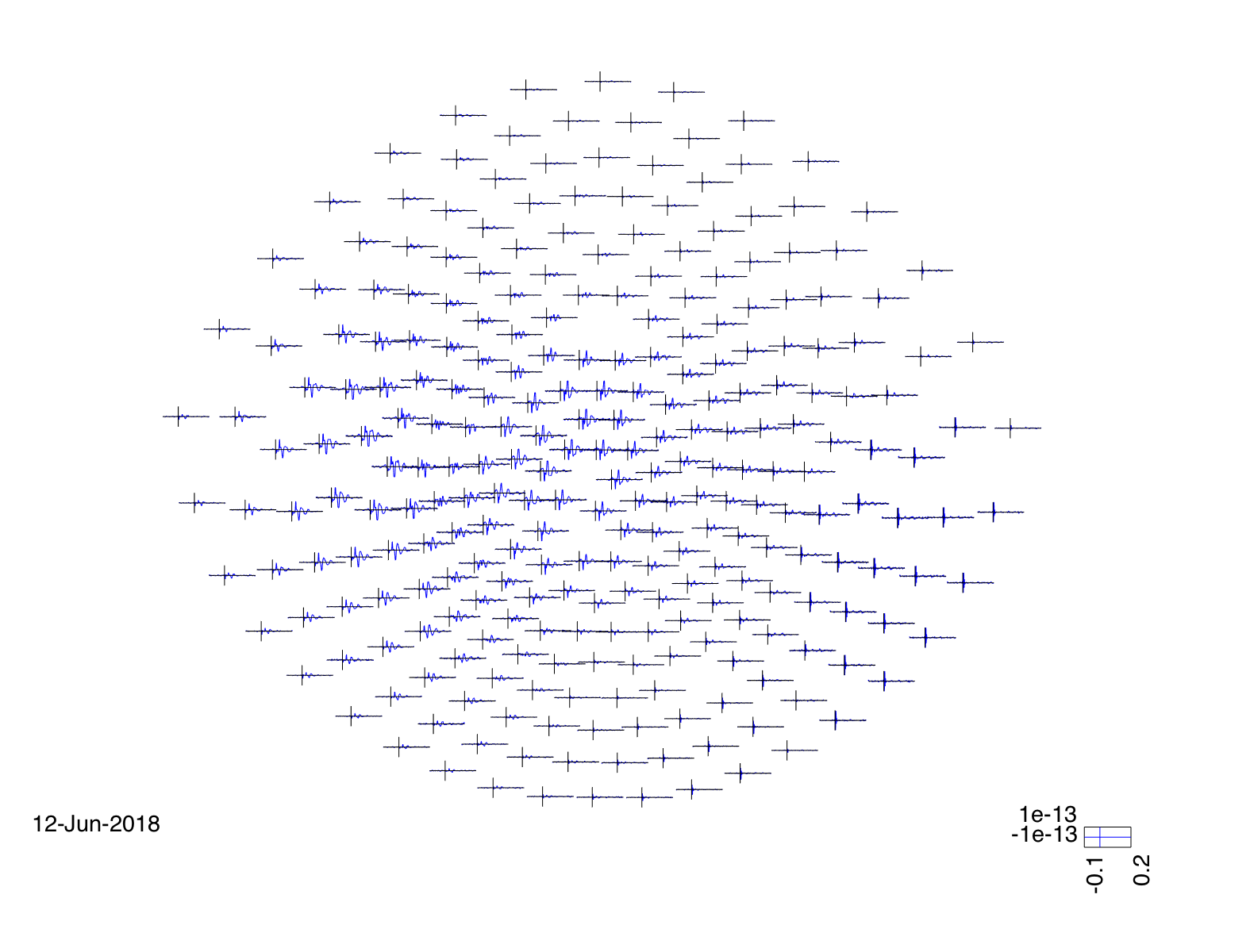 Figure 5: Use of ft_multiplotER for representation of the single trial according to the EEG cap.

Use ft_topoplotER to plot the topographic distribution over the head: 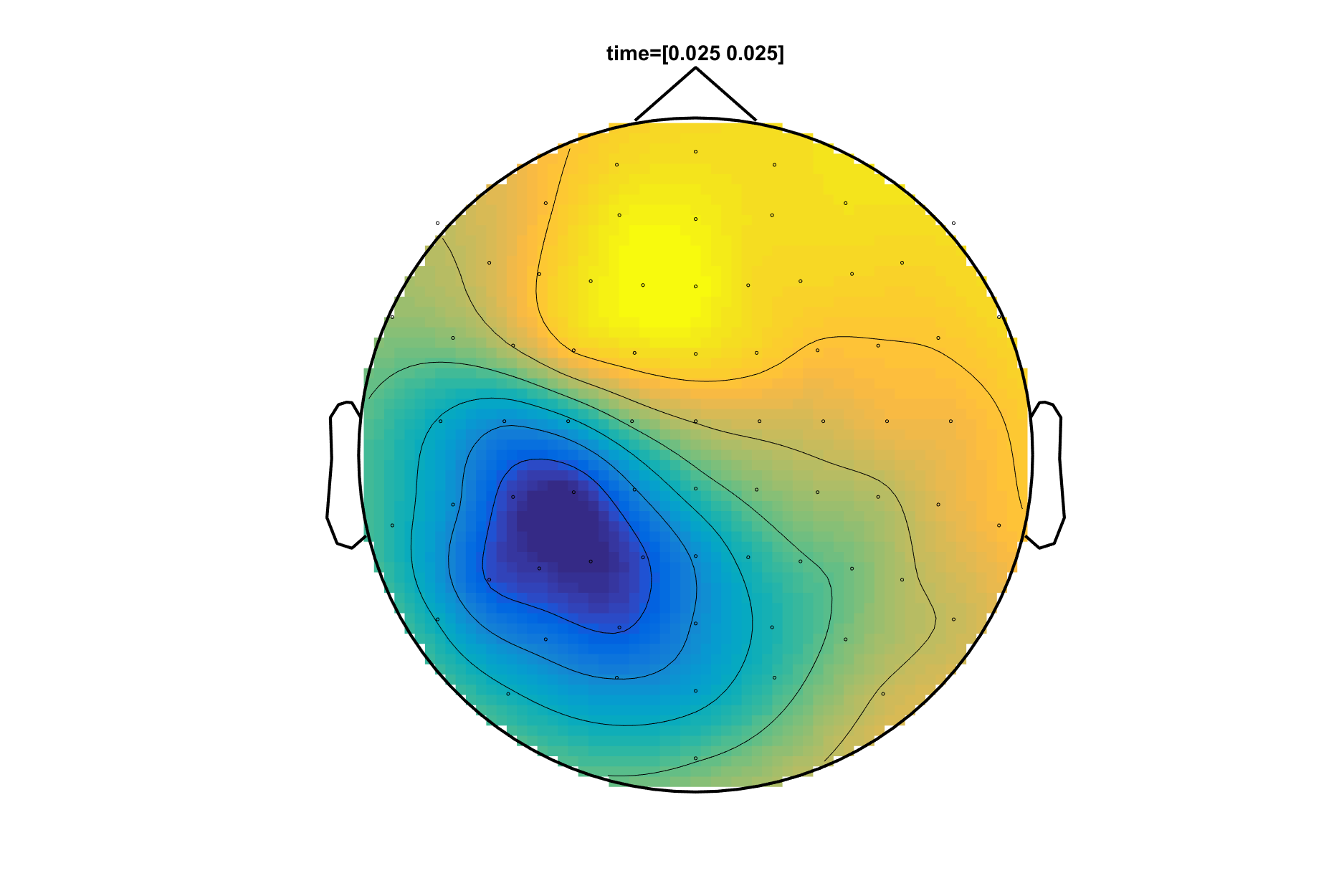 Figure 6: Representation of the P20/N20 component using the function, ft_topoplotER.

Use ft_topoplotER to plot the topographic distribution over the head: 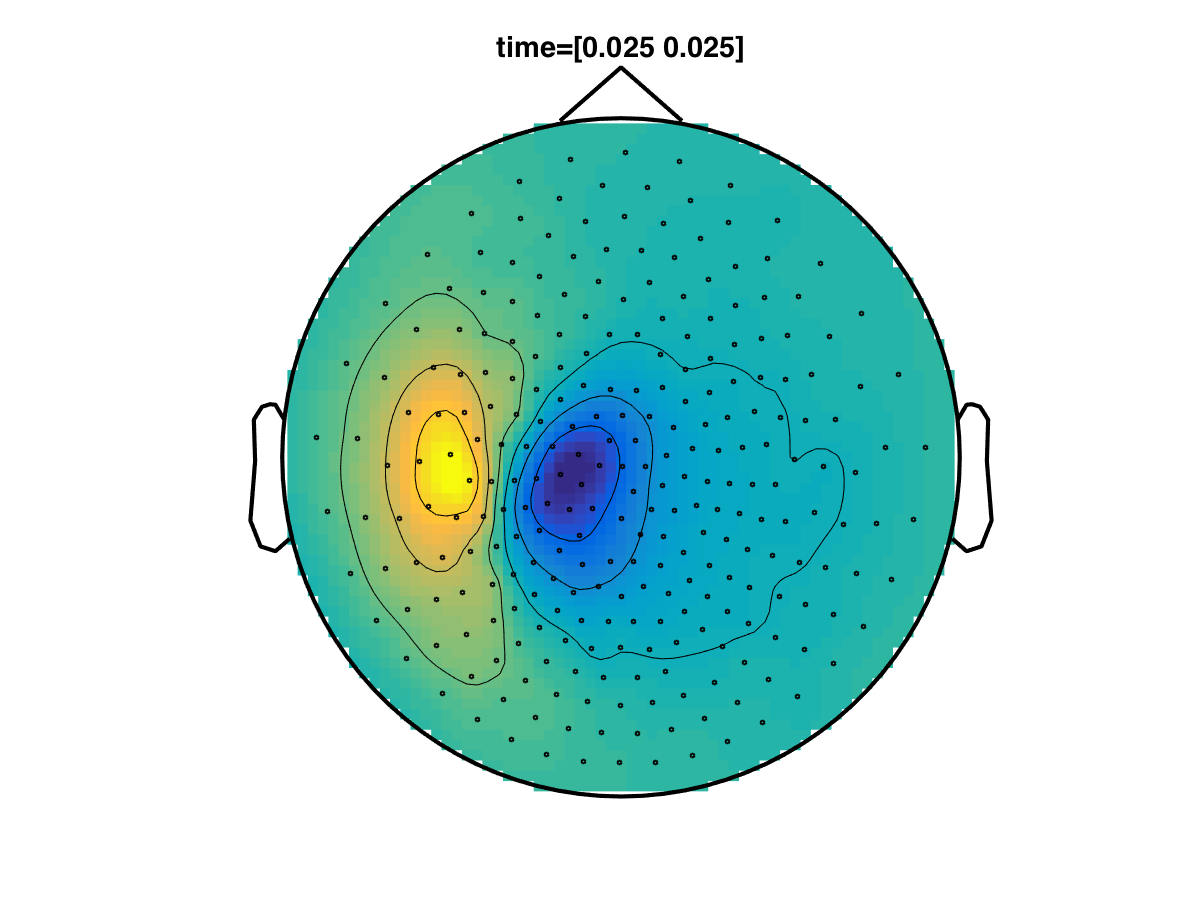 Figure 7: Representation of the P20/N20 component using the function, ft_topoplotER.

In this tutorial we learned how to look at EEG data, define trials based on trigger codes, preprocess the data (including filtering, artifact rejection, re-referencing, and average the data to SEPs). We then learned how to display the results in terms of their time courses as well as their corresponding topographies.

The next step of workshop will be the source reconstruction among different head models and different inverse methods with forward problem and inverse problem.