This tutorial demonstrates how to construct a volume conduction model of the head based on a single subject’s MRI. We will use the anatomical images that belong to the same subject whose data was analyzed in other tutorials. The anatomical MRI data is available here.

Furthermore, elsewhere on this website you can find also information about MEG headmodels and about other EEG headmodels.

We want to note that the FEM modeling works only on MATLAB versions 2011 and above.

The EEG/MEG signals measured on the scalp do not directly reflect the location of the activated neurons. To reconstruct the location and the time-course or spectral content of a source in the brain, various source-localization methods are available. You can read more about the different methods in review papers suggested here.

The forward solution can be computed when the head model, the sensor positions and the source is given. For distributed source models and for scanning approaches (such as beamforming), the source model is discretizing the brain volume into a volumetric or surface grid. When the forward solution is computed, the lead field matrix (= channels X source points matrix) is calculated for each grid point taking into account the head model and the sensor positions.

A prerequisite of forward modeling is that the geometrical description of all elements (sensor positions, head model and source model) is registered in the same coordination system with the same units. There are different “conventions” how to define a coordinate system, but the precise coordinate system is not relevant, as long as all data is expressed in it consistently (i.e. in the same coordinate system). Here read more about how the different head and mri coordinate systems are defined. The MEG sensors by default are defined relative to anatomical landmarks of the head (the fiducial coils), therefore when the anatomical images are also aligned to these landmarks, the MEG sensors do not need to be re-aligned. EEG data is typically not aligned to the head, therefore, the electrodes have to be re-aligned prior to source-reconstruction (see also this faq and this example).

This tutorial is focusing on how to build the FEM volume conduction model for the head.

In FieldTrip a volume conduction model is represented as a MATLAB structure which is usually indicated with the variable name vol. It describes how the currents flow through the tissue, not where they originate from. In general it consists of a description of the geometry of the head, a description of the conductivity of the tissue, and mathematical parameters that are derived from these. Whether and how the mathematical parameters are described depends on the computational solution to the forward problem either by numerical approximations, such as the boundary element and finite element method (BEM and FEM), or by exact analytical solutions (e.g., for spherical models).

The more accurate the description of the geometry of the head or the source, the better the quality of the forward model. There are many types of head models which, to various degrees, take the individual anatomy into account. The different head models available in FieldTrip are listed here.

If an anatomical MRI is not available for your EEG subject, you can consider to use a template MRI or a template head model that is located in the FieldTrip template directory. If you do not have an MRI, but if you do have a measurement of the scalp surface (e.g., with a Polhemus tracker), you can use concentric spheres volume conduction model. If you do not want to (or cannot) use any realistic information about the brain-surface or the head-shape, you can resort to the single sphere volume conduction model.

Here, we will work towards a volume conduction model of the head based on the finite element method (FEM). The FEM model assumes realistic information where the skin, skull, csf, gray and white matter is in the head. First, we will use an anatomical MRI to extract these tissue. This procedure is termed segmentation. Following the segmentation, a geometrical description of the head will be created using hexahedrons. Finally, the FEM model will be computed.

The anatomical mri of the tutorial data set is available here. 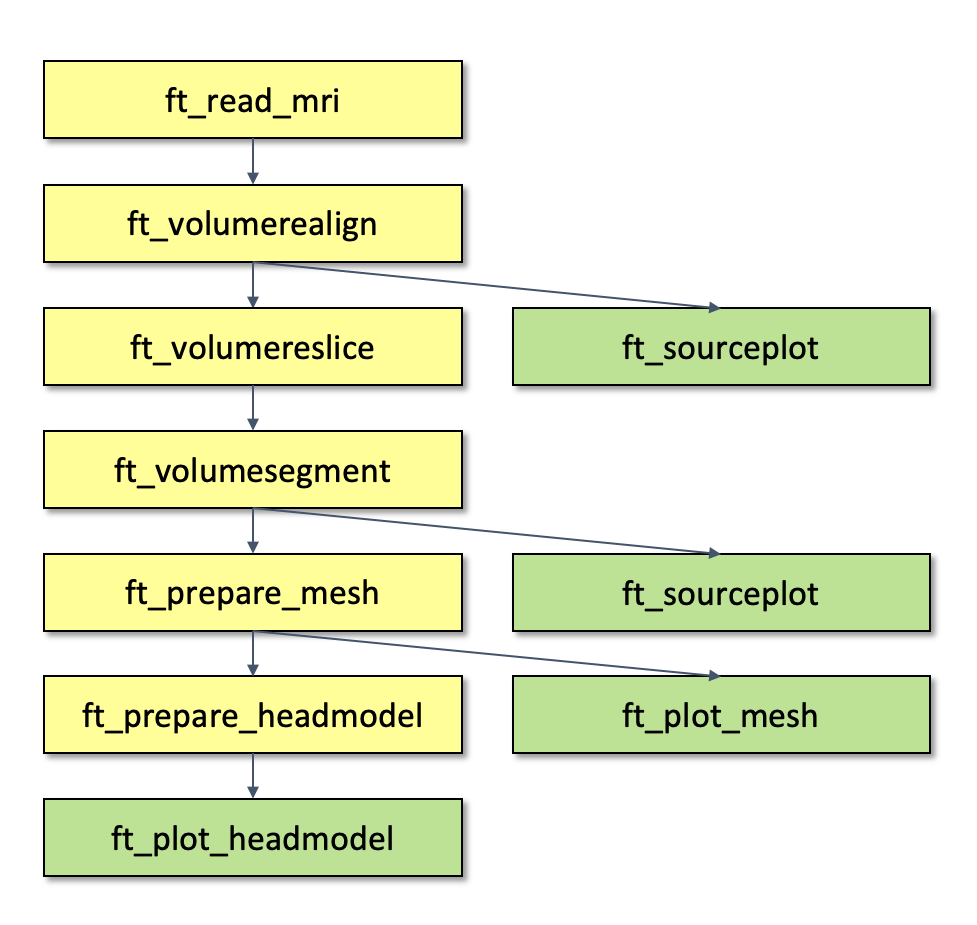 Reading in the anatomical data

Before starting with FieldTrip, it is important that you set up your MATLAB path properly.

Then, you can read in the mri data.

The structure of your mri_orig variable contains the following field

You can see that the coordsys field of anatomical data that we read in is already aligned to the ctf coordinate system.

In the next step of this tutorial, we will segment the anatomical MRI. Segmentation works properly when the voxels of the anatomical images are homogenous (i.e. the size of the voxel is the same into each direction). If you do not have homogenous voxels (or you are not sure of), you can use the ft_volumereslice function on the anatomical data before segmentation. Read more about re-slicing here.

We check if the resolution and the dimensions were well specified, and the reslicement did not cause any loss in the anatomical information (i.e. if all parts of the head are present in the resliced images). 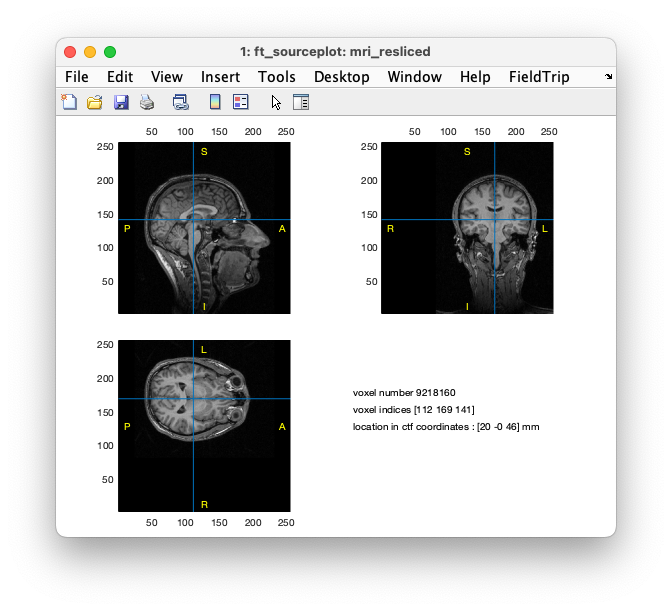 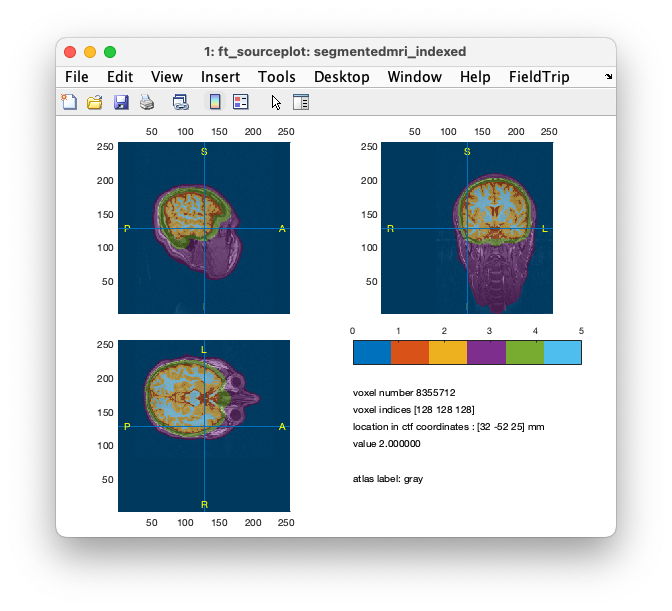 In this step, the voxels of the anatomical MRI are segmented (i.e. separated) into the five different tissue types: scalp, skull, csf (cerebro-spinal fluid), gray and white matter. These latest three tissues belong to the brain. The function ft_volumesegment will produce the required output. You can read more about how the tissue-types are represented in the output of this function in this FAQ. The segmentation should contain a binary representation of 5 tissue types which do not overlap.

Note that the segmentation is quite time consuming (~15mins) and if you want you can load the result and skip ahead to the next step. You can download the segmented MRI of this tutorial data from the from the download server (segmentedmri.mat).

The segmentation does not change the coordinate system, nor the size of the volume. You can see this in the first three fields (dim, transform and coordsys) which are the same as the corresponding fields of the input mri data structure. But now, the field transform aligns the matrix in fields skull, scalp… etc. to the coordinate system defined in the coordsys field.

The function ft_sourceplot can be used to plot the segmented tissues. In order, to see all tissues in one image, ft_datatype_segmentation can convert the segmentation structure to an indexed representation. Each tissue-types will be shown by a different color in the image. 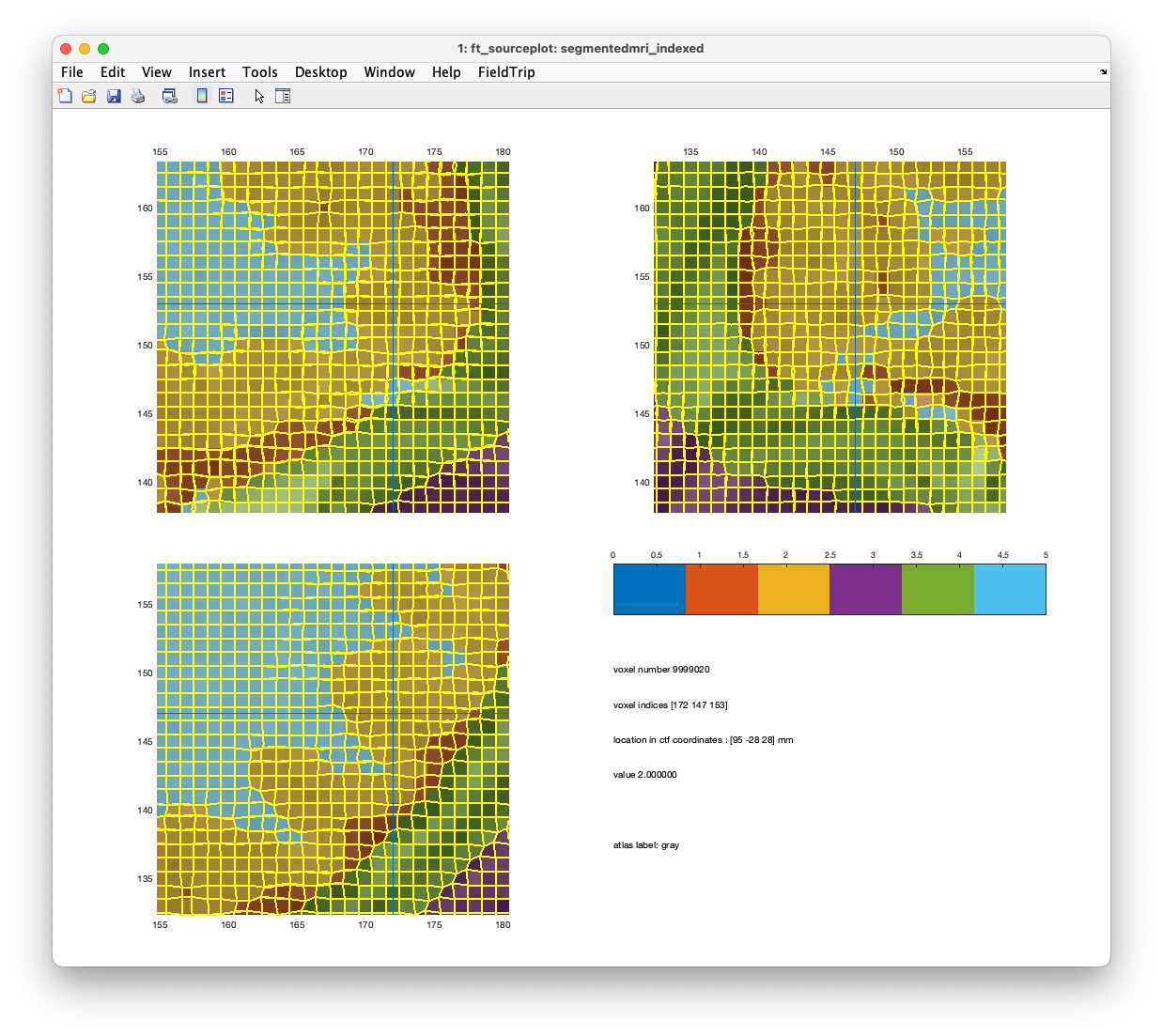 In this step, a geometrical description of the head is created by the ft_prepare_mesh function. The output of this function is a hexahedral mesh (i.e. the points of the mesh are connected in such way that they create hexahedrons). Each hexahedron is assigned to one of the five tissue-types. In order to improve the geometrical properties of the mesh (i. e. its approximation of the head shape), a node-shift approach can be applied which shifts boundary vertices in the direction of those hexahedrons that represent the minority around it(see figure. The magnitude of the shift is controlled by a shift parameter which can range from 0 (no shift) to 0.49(maximum shift). However, choosing the shift parameter too large can result in degenerated hexahedrons. For starters we recommend a shift parameter of 0.3. 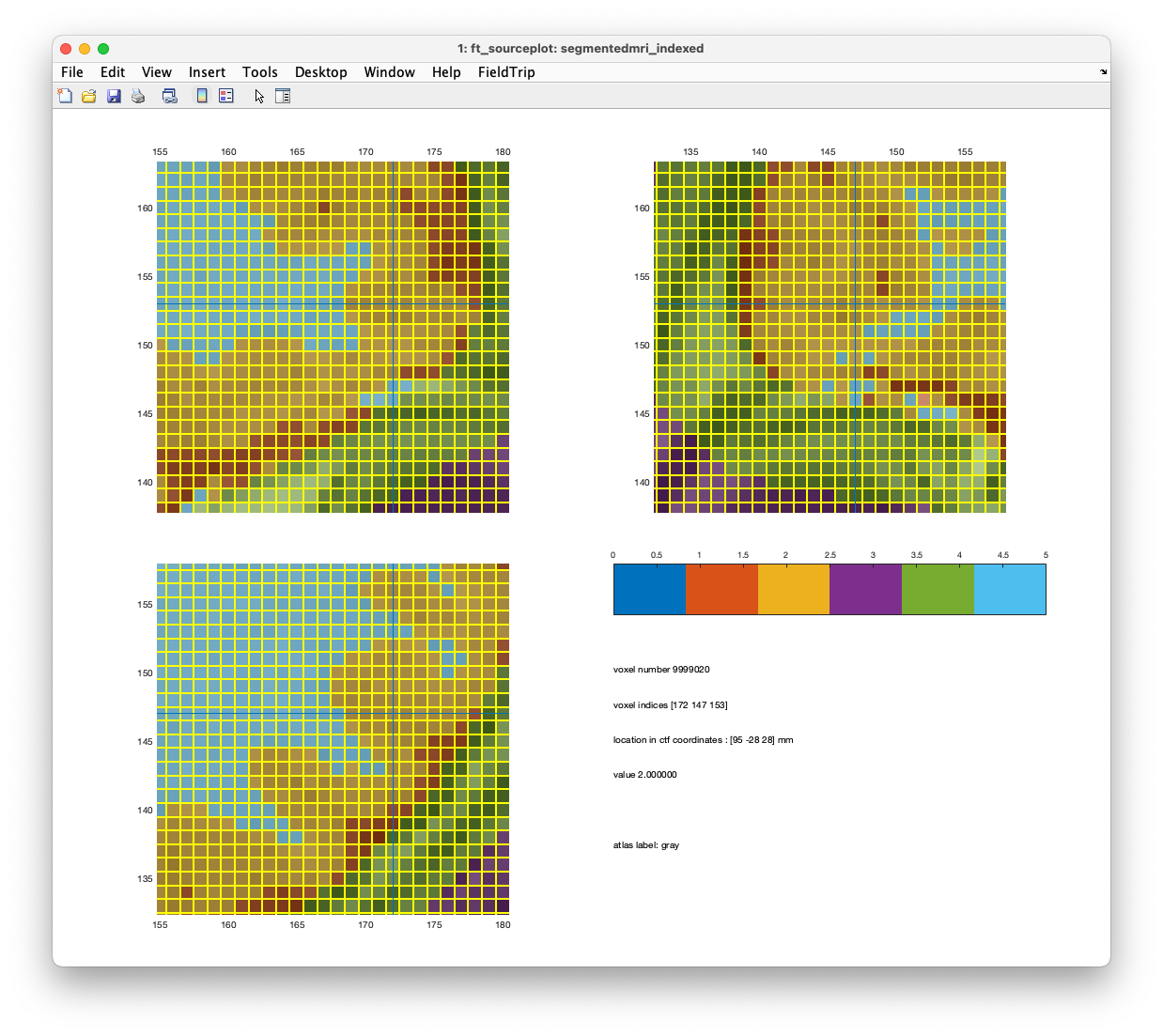 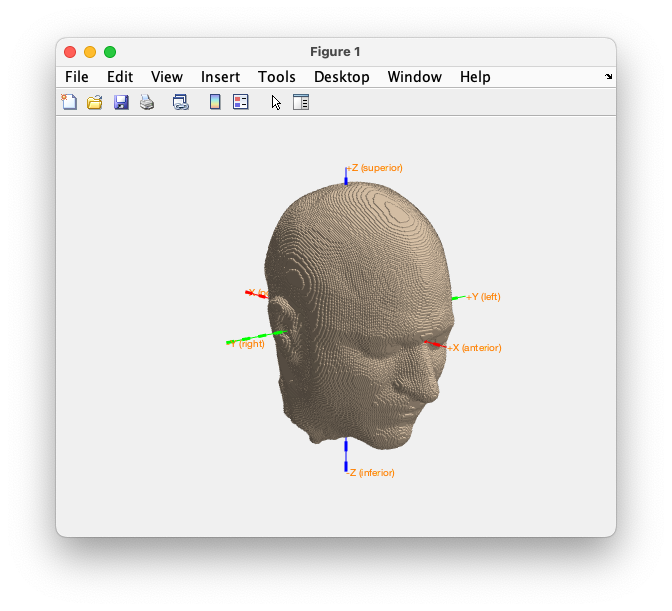 Figure 5. Comparison of an unshifted mesh(upper) and shifted mesh(lower). Visualization done with ParaView.

The mesh contains the following field

At the moment FieldTrip only supports hexahedrons for FEM modeling.

Gray and white matter, csf, skull and skin has been differentiated in the geometrical description of the head. Now, we will create the volume conduction model. We will specify method ‘simbio’ in the cfg.method field of ft_prepare_headmodel. This methods also requires to specify the conductivities for each tissue-types. The headmodel can also be downloaded here download server.

The headmodel data structure contains the same information in the pos (pnt in mesh), hex, tissue and tissulabel fields than the mesh we created earlier. And it has also new field

Note that the unit of measurement used in the geometrical description of headmodel is in ‘mm’. The EEG sensors should be also defined in ‘mm’. The units of all type of geometrical information should be the same when a leadfield is computed for source-reconstruction.

The hexahedral mesh is a geometrical description of the head. It is built up from hexahedrons. For visualization, it is possible to use the ft_plot_mesh function which is generally used for plotting any type of meshes in FieldTrip. Because of the large number of points in a mesh, it is advised to use the ‘surfaceonly’ option. In this case, the function will plot hexagonal surfaces of those hexahedrons which create the outside surface of the head. 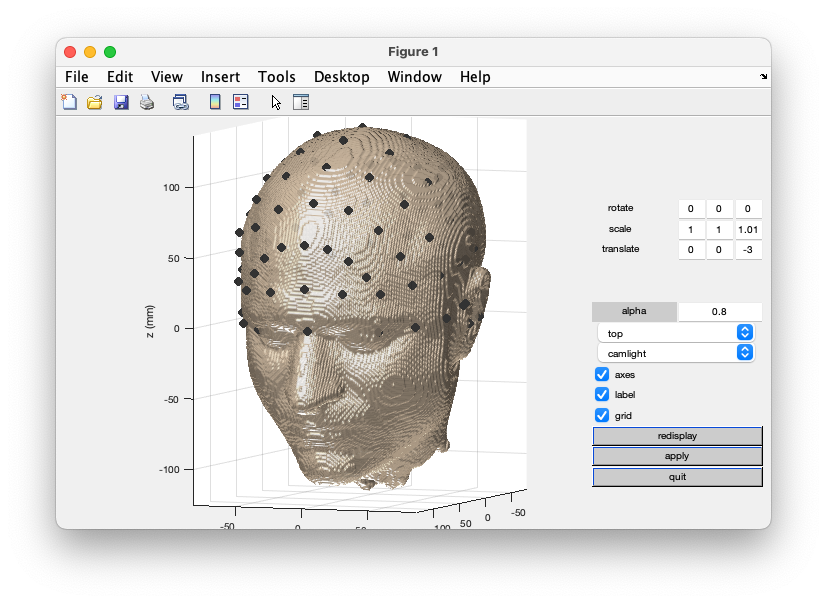 Figure 6. Plot of the FEM mesh

Alternatively, you can write the mesh into another format with ft_write_headshape and use an external (free) software ParaView or MeshLab for visualization.

Since for this subject we have an MRI, but no EEG electrodes, we will use a template EEG electrode set which you can find in the fieldtrip/template/electrode/standard_1020.elc file.

are described in the chanpos and elecpos field. The label field contains the name of the channels. 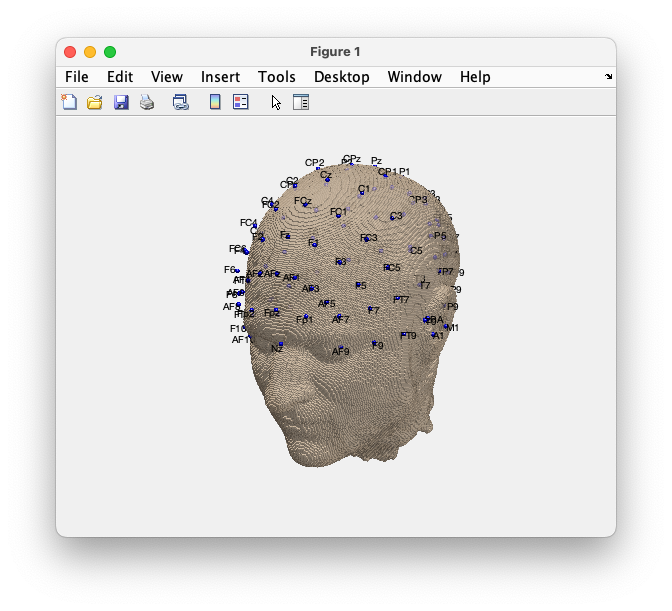 The electrodes can be aligned in two ways

Now, we will show how to do the alignment in both ways

For the automatic alignment, we need to know the following:

In the template set of electrodes, the first three labels are: ‘Nz’, ‘LPA’ and ‘RPA’. These labels show that the first three rows of the elec.chanpos field defines the position of the nasion, left and right PA (the landmarks of the CTF ) in “electrode” coordinates. We can use this information for the automatic alignment. But we also need to know the position of the same points in the anatomical mri. We use an anatomical mri which has been already aligned to these points, therefore we can find these coordinates in the header information.

If you do not have the position of the anatomical landmarks in your volume, you can use the ft_volumerealign function to get those positions.

First, we convert the fiducial positions from voxel into CTF headcoordinate system using the transformation matrix and the ft_warp_apply function.

Then, we determine the translation and rotation that is needed to get the position of the fiducials in the electrode structure (defined with labels ‘Nz’, ‘LPA’, ‘RPA’) to their counterparts in the CTF head coordinate system that we acquired from the anatomical mri (nas, lpa, rpa).

We can check the alignment by plotting together the scalp surface with the electrodes. 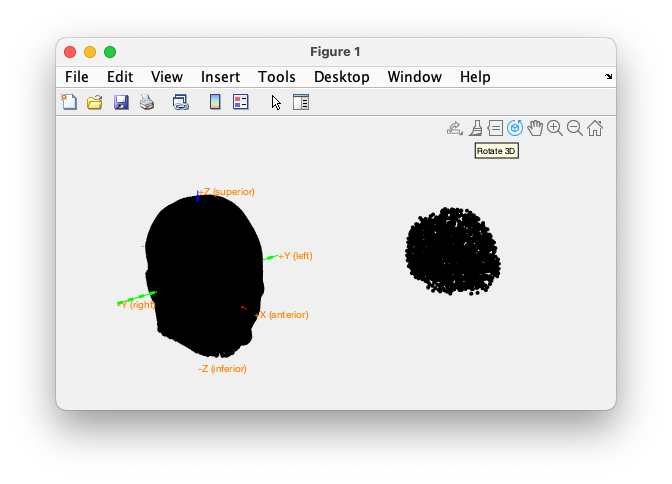 Figure 8. Electrodes plotted together with the head surface after automatic alignement.

Here, we only need to use translation. We can shift about 15 mm along the x-axis and -10 mm along the y-axis. Note that in the CTF head coordinate system the x-axis is towards the nose.

Figure 9. Aligned electrodes plotted together with the head surface

Create a head model with method ‘concentricspheres’ that you fit on scalp, skull and brain surfaces, i.e. using the already made mesh.

Plot the head model in the same figure with the brain surface and scalp. Check the help of ft_plot_headmodel for further options of the visualization (e.g., color, transparency) which help to see the spheres and the brain surface together.

What is the difference between this head model and the FEM?

In this tutorial, it was explained how to build a volume conduction model of the head using a single subject anatomical mri and a finite element method (FEM).

You can read more about specific source-reconstruction methods in the Localizing oscillatory sources using beamformer techniques and in the Source reconstruction of event-related fields using minimum-norm estimate tutorials.

Here are the related FAQs:

and the related examples: