This tutorial makes use of the preprocessed data from the preprocessing tutorial. Run the script from that section in order to produce the single trial data structure, or download PreprocData.mat. Load the data into MATLAB memory with the following command:

For a successful analysis of EEG or MEG signals, “clean” data is required. That means that you should try to reduce the amount of variance in the data due to factors that you cannot influence. One of the factors that is difficult to control is the presence of artifacts in the data. These artifact can be physiological, can relate to the behaviour of the subject, or can result from the acquisition electronics. The strongest physiological artifacts stem from eye blinks, eye movements and head movements. Muscle artifact from swallowing and neck contraction can be a problem as well. Artifacts related to the electronics are ‘SQUID jumps’ or spikes seen in several channels.

To start with, it is best to avoid those artifacts during the recording. You can instruct the subject not to blink during the trial, but instead give him some well-defined time between the trials in which he is allowed to blink. But of course there will always be some artifacts in the raw data.

While detecting artifacts by visual inspection, keep in mind that it is a subjective decision to reject certain trials and keep other trials. Which type of artifacts should be rejected depends on the analysis you would like to do on the clean data. If you would like to do a time-frequency analysis of power in the gamma band it is important to reject all trials with muscle artifacts, but for a ERF analysis it is more important to reject trials with drifts and eye artifacts.

In visual artifact detection, the user visually inspects the data and identifies the trials or data segments and the channels that are affected and that should be removed. The visual inspection results in a list of noisy data segments and channels.

The functions that are available for visual artifact detection are

The ft_rejectvisual function works only for segmented data (i.e. trials) that have already been read into memory. It allows you to browse through the large amounts of data in a MATLAB figure by either showing all channels at once (per trial) or showing all trials at once (per channel) or by showing a summary of all channels and trials. Using the mouse, you can select trials and/or channels that should be removed from the data. This function directly returns the data with the noise parts removed and you don’t have to call ft_rejectartifact or ft_rejectcomponent.

The ft_databrowser function works both for continuous and segmented data and also works with the data either on disk or already read into memory. It allows you to browse through the data and to select with the mouse sections of data that contain an artifact. Those time-segments are marked. Contrary to ft_rejectvisual, the ft_databrowser function does not return the cleaned data and also does not allow you to delete bad channels (though you can switch them off from visualization). After detecting the time-segments with the artifacts, you should call ft_rejectartifact to remove them from your data (when the data is already in memory) or from your trial definition (when the data is still on disk).

Noteworthy is that the ft_databrowser function can also be used to visualise the timecourse of the ICA components and thus easily allows you to identify the components corresponding to eye blinks, heart beat and line noise. Note that a proper ICA unmixing of your data requires that the atypical artifacts (e.g., electrode movement, squid jumps) are removed prior to calling ft_componentanalysis. After you have determined what the bad components are, you can call ft_rejectcomponent to project the data back to the sensor level, excluding the bad components.

The following steps are used for visual artifact rejection

Manual artifact rejection - display one trial at a time

To browse through the data trial by trial while viewing all channels write:

Click through the trials using the > button to inspect each trial.

In trial 46 notice the slower drift observed over a larger group of sensors. This is most likely due to a head movement.

Trial 250 shows an artifact which is caused by the electronics. Notice the jump in sensor MLT41. 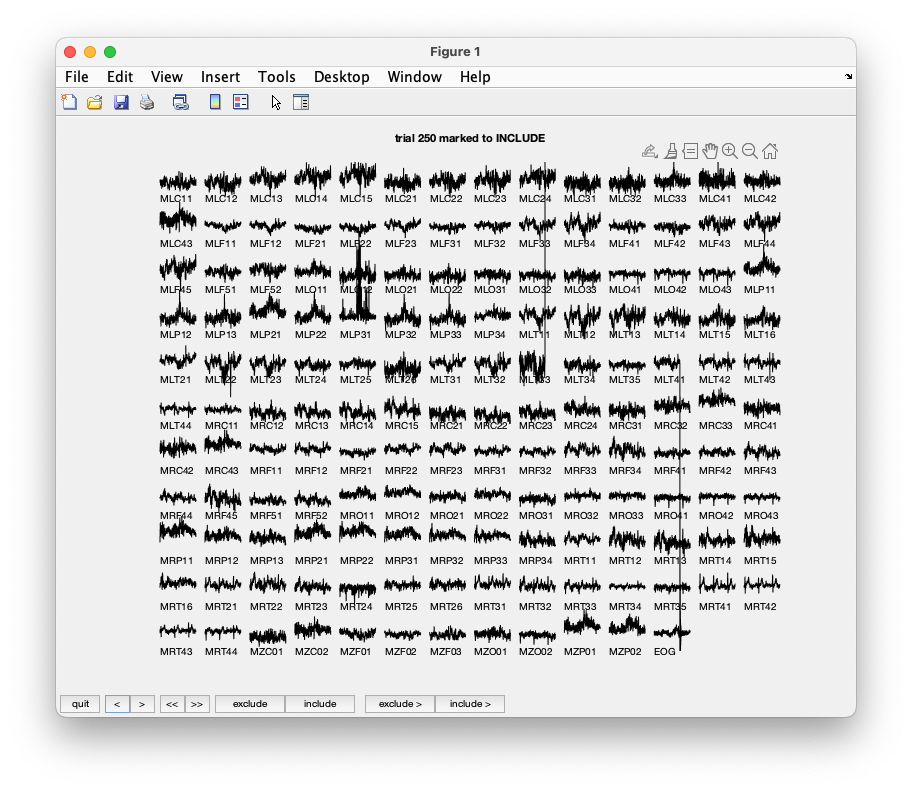 Manual artifact rejection - display one channel at a time

It can also be convenient to view data from one channel at a time. This can be particularly relevant for the EOG channel. To do so write:

Click through the data using the > button. While clicking through all the trials you see that channels MLO12 and MLP31 contain a lot of artifacts (see the figure below ). They should be marked as ‘bad’. After pressing the ‘quit’ button the channels marked ‘bad’ are now removed from the data structure. 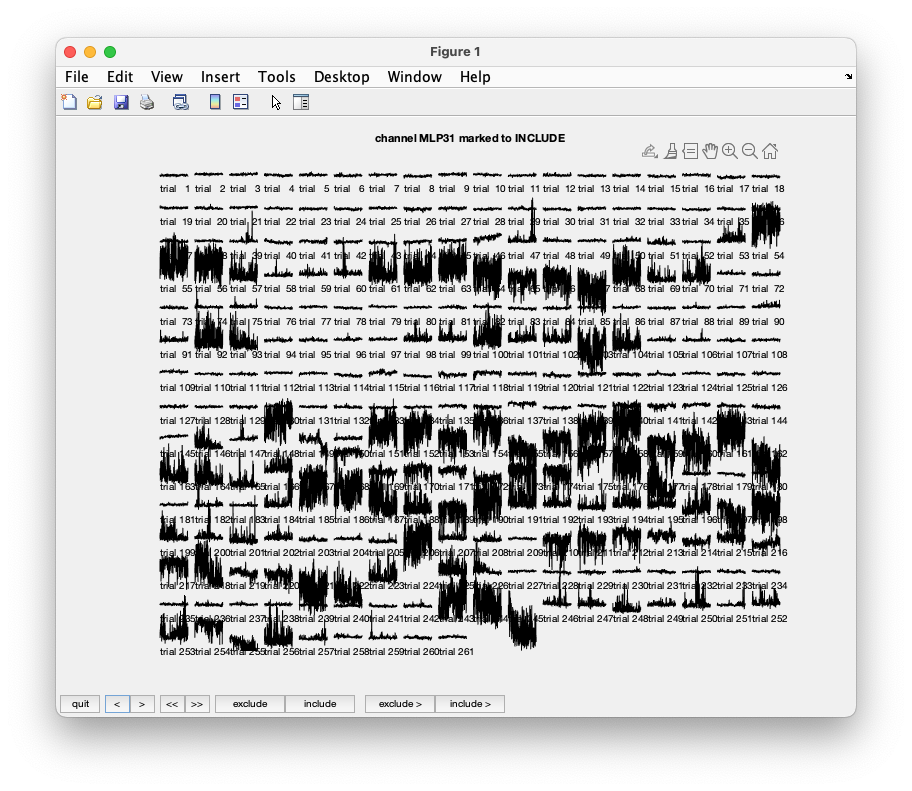 To produce an overview of the data choose the cfg.method ‘summary

This gives you a plot with the variance for each channel and trial. 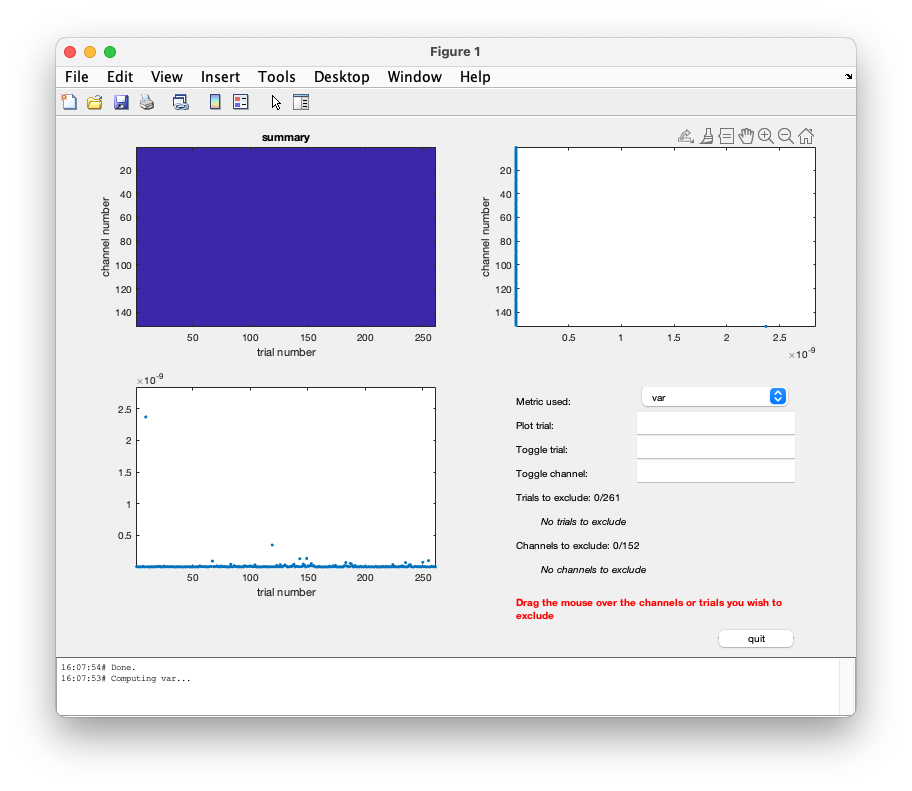 You should note that there is one channel which has a very high variance. That is the EOG channel, which contains numbers in uV which are of a very different order of magnitude than all MEG channels in T. Toggling the EOG channel will also change the figure with the maximal variance per trial (second row, left) a lot. Then you only see the variance in each trial in the MEG channels.

The command window allows for toggling trials and channels on and off. The first choice could be of toggling channels off. Enter either a channel number or its name in the edit box and enter it again to toggle it back on.

Alternatively use the mouse directly to toggle (e.g.) channels off as following: drag the mouse on the top right panel, and include the rightmost dot in the selection box. In a couple of successive steps remove the 4 channels with bigger variance and press ‘quit’.

Before pressing the ‘quit’ button, you can always toggle the channels/trials back on, by using the edit boxes ‘toggle trial’ or ‘toggle channel’. 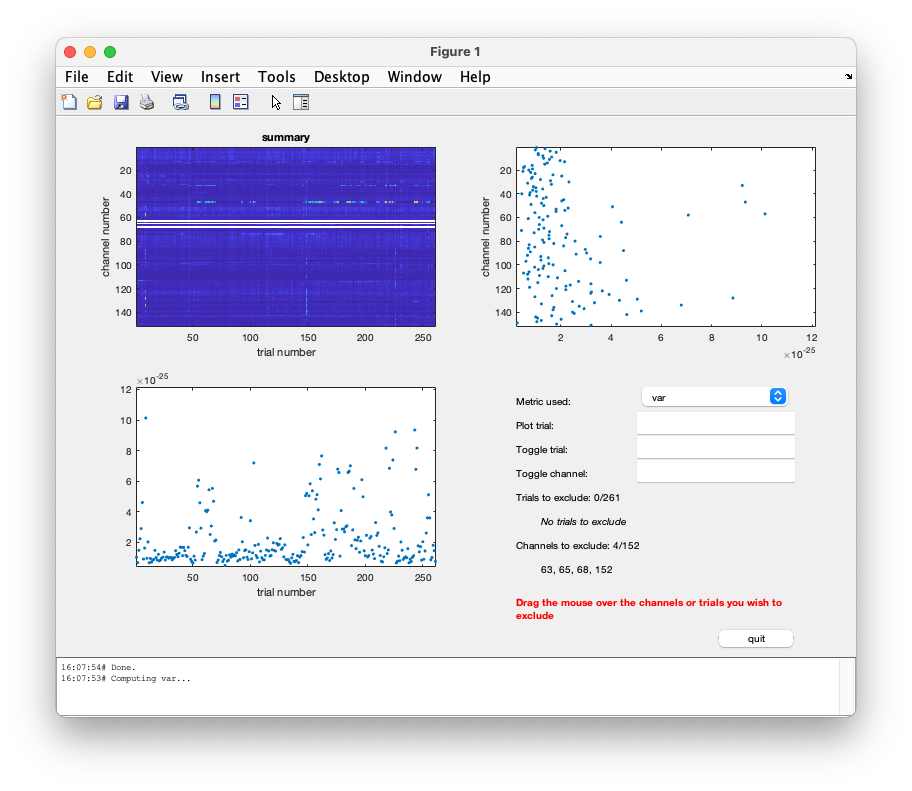 After quitting, the trials/channels will be rejected from the data set and the command line output appears as follows:

This operation could be repeated for each of the metrics, by selecting the metric ‘var’, ‘min’, ‘max’, etc.

The summary mode in ft_rejectvisual has been primarily designed to visually screen for artefacts in channels of a consistent type, i.e., only for the axial MEG gradiometers in this example.

If you have EEG data, the EOG channels have the same physical units and very similar amplitudes and therefore can be visualised simultaneously.

If you have data from a 306-channel Neuromag system, you will have both magnetometers and planar gradiometers, which have different physical units and rather different numbers. Combining them in a single visualization is likely to result in a biassed selection, either mainly relying on the magnetometers or the gradiometers being used to find artefacts.

You can also call ft_rejectvisual multiple times, once for every type of channels in your data. If you use cfg.keepchannel=’yes’, channels will not be removed from the data on the subsequent calls. For example:

The previous example of calling ft_rejectvisual sequentially does not allow to exclude bad channels from the data structure. If youw ant to select both trials and channels, you can use the following approach:

Use ft_databrowser to mark the artifacts

An alternative way to remove artifacts is to page through the butterfly plots of the single trials, by using the ft_databrowser function. Call the function like

In the image below are two figures for the same trial (trial 228). As in the left figure first drag the mouse on the artifact to create dotted lines on either side of the artifact (left image). Then, as in the right figure click within the dotted lines

The resulting variable contains the field

with the begin and end sample for all marked sections.

Channels MLO12 and MLP31 are removed because of artifacts.

With the trials split per condition, this corresponds to the following trials: