There are largely two alternative approaches for preprocessing, which especially differ in the amount of memory required. The first approach is to read all data from the file into memory, apply filters, and subsequently cut the data into interesting segments. The second approach is to first identify the interesting segments, read those segments from the data file and apply the filters to those segments only. The remainder of this tutorial explains the second approach, as that is the most appropriate for large data sets such as the EEG data used in this tutorial. The approach for reading and filtering continuous data and segmenting afterwards is explained in another tutorial.

Preprocessing involves several steps including identifying individual trials from the dataset, filtering and artifact rejections. This tutorial covers how to identify trials using the trigger signal. Defining data segments of interest can be done according to a specified trigger channel or according to your own criteria when you write your own trial function. Examples for both ways are described in this tutorial, and both ways depend on ft_definetrial.

The output of ft_definetrial is a configuration structure containing the field cfg.trl. This is a matrix representing the relevant parts of the raw datafile which are to be selected for further processing. Each row in the trl matrix represents a single epoch-of-interest, and the trl matrix has at least 3 columns. The first column defines (in samples) the beginpoint of each epoch with respect to how the data are stored in the raw datafile. The second column defines (in samples) the endpoint of each epoch, and the third column specifies the offset (in samples) of the first sample within each epoch with respect to timepoint 0 within that epoch.

The EEG dataset used in this script is available here. In the experiment, subjects made positive/negative or animal/human judgments on nouns. The nouns were either positive animals (puppy), negative animals (maggot), positive humans (princess), or negative humans (murderer). The nouns were presented visually (written words). The task cue (which judgement to make) was given with each word.

For memory efficiency (especially relevant for large datasets), with FieldTrip we commonly use the strategy to only read in those segments of data that are of interest. This requires first to define the segments of interest (the trials) and subsequently to read them in and preprocess them. It is also possible to read in the whole continuous data, and segment the data in memory (see here).

Instead of using the default ‘trialfun_general’ function with ft_definetrial, we will use a custom ‘trialfun_affcog’ that has been written specifically for this experiment. This custom function reads markers from the EEG record and identifies trials that belong to condition 1 (positive-negative judgement) or 2 (animal-human judgement). The function is available along with the data.

The custom trial function is available from here or can be found at the end in the appendix of this example script. Please save it to a local file with the name trialfun_affcog.m.

After the call to ft_definetrial, the cfg now not only stores the dataset name, but also the definition of the segments of data that will be used for further processing and analysis. The first column is the begin sample, the second the end sample, the third the offset and the fourth contains the condition for each trial (1=affective, 2=ontological).

In this raw BrainVision dataset, the signal from all electrodes is recorded unipolar and referenced to an electrode on the left mastoid. We want the signal to be referenced to linked (left and right) mastoids. During the acquisition an ‘RM’ electrode (number 32) was placed on the right mastoid and recorded along with all EEG channels.

To re-reference the data we use the cfg.implicitref option of ft_preprocessing to add the implicit reference channel ‘LM’ (the left mastoid) to the data representation as a channel with all zeros, and subsequently use the cfg.refchannel and cfg.reref options to subtract the mean of the two mastoid channels (‘LM’ and ‘RM’) from all channels.

Try ft_databrowser now to visualize the data segments that were read into memory.

You can also use ft_databrowser to visualize the continuous data that is stored on disk. The data will be read on the fly:

Why is there a vertical line with label S141 on the first call to ft_databrowser(cfg,data)?

Can you find this line (or lines with other labels) on the second call to ft_databrowser(cfg)?

FieldTrip data structures are intended to be ‘lightweight’, in the sense that the internal MATLAB arrays can be transparently accessed. Have a look at the data as you read it into memory:

and note that, if you wanted to, you could plot a single trial with default MATLAB function

We now continue with re-referencing to extract the bipolar EOG signal from the data. In the BrainAmp acquisition system, all channels are measured relative to a common reference. For the horizontal EOG we will compute the potential difference between channels 57 and 25 (see the plot of the layout and the figure below). For the vertical EOG we will use channel 53 and channel “LEOG” which was placed below the subjects’ left eye (not pictured on the layout).

Some acquisition systems, such as Biosemi, allow for direct bipolar recording of EOG. The following re-referencing step to obtain the EOG channels is not needed when working with bipolar data. 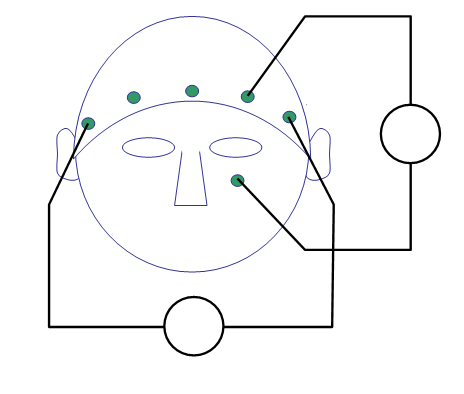 You can check the channel labels that are now present in the data and use ft_databrowser to look at all data combined.

For topoplotting and sometimes for analysis it is necessary to know how the electrodes were positioned on the scalp. In contrast to the sensor arrangement from a given MEG manufacturer, the topographical arrangement of the channels in EEG is not fixed. Different acquisition systems are designed for different electrode montages, and the number and position of electrodes can be adjusted depending on the experimental goal. In the current experiment, so-called 64-electrodes equidistant montage (ActiCap, BrainVision) was used. 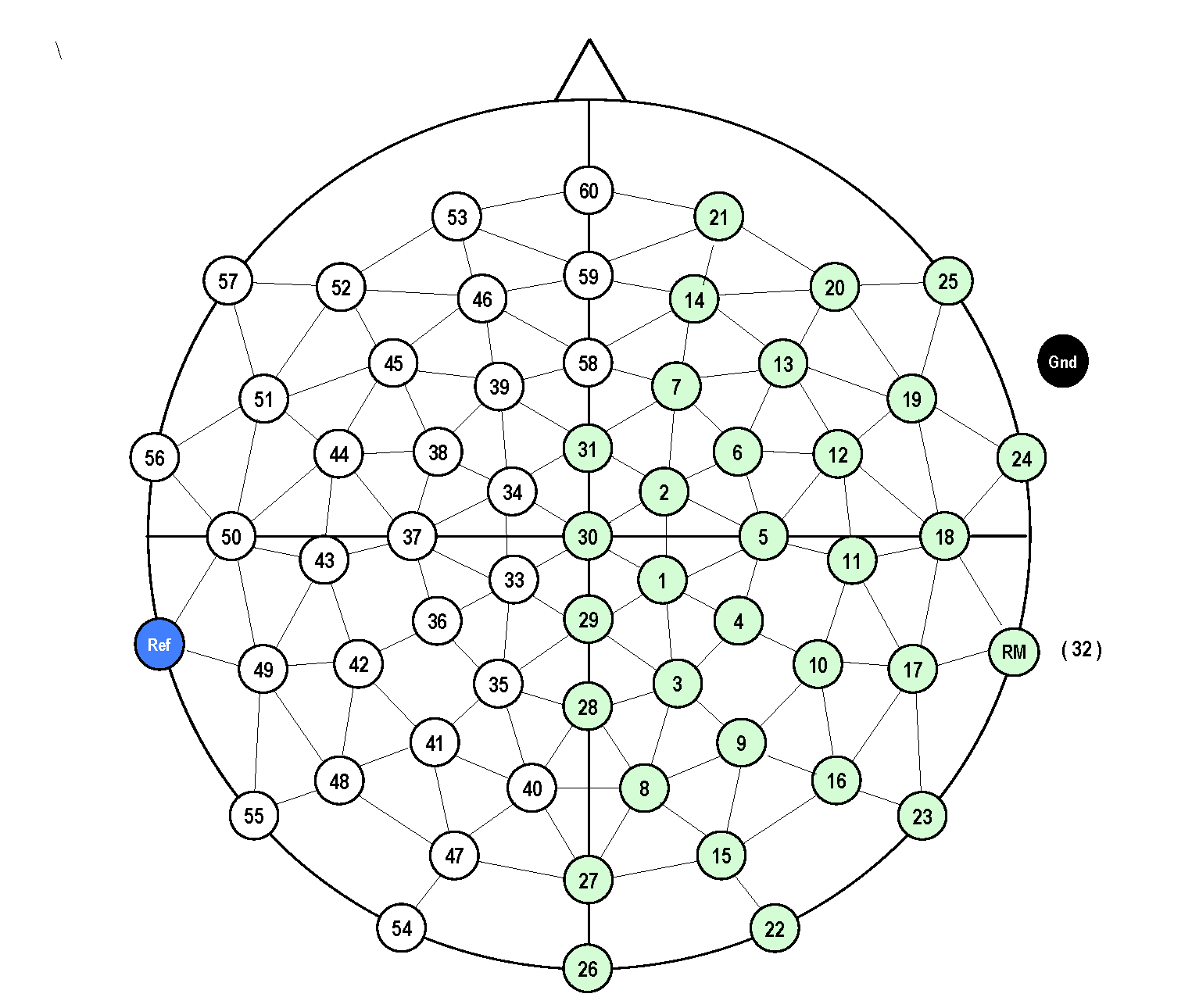 The channel positions are not stored in the EEG dataset. You have to use a layout file; this is a .mat file that contains the 2-D positions of the channels. FieldTrip provides a number of default layouts for BrainVision EEG caps in the fieldtrip/template/layout directory. It is also possible to create custom layouts (see ft_prepare_layout and the layout tutorial). In this example we will use an existing layout file that is included with the example data.

An next important step of EEG preprocessing is detection (and rejection) of artifacts. Different approaches of dealing with artifacts are presented in details in the introductory tutorial on artifacts, the visual artifact removal tutorial and the automatic artifact rejection removal tutorial. In this example script, we will use ft_rejectvisual function to visually inspect the data and reject the trials or channels that contain artifacts. We first will try the “channel” mode. In this mode all trials are displayed at once allowing paging through the channels. Then we will try the “summary” mode.

You can scroll to the vertical EOG channel (‘veog’, number 61) and confirm to yourself that trials 22, 42, 126, 136 and 150 contain blinks. You can exclude a trial from the data by clicking on it. Note, however, that in this example we do not assign any output to the function. MATLAB will create the default output “ans” variable. All the changes (rejections) that you make will be applied to the “ans”. The “data” will remain the same, no trials will be removed! 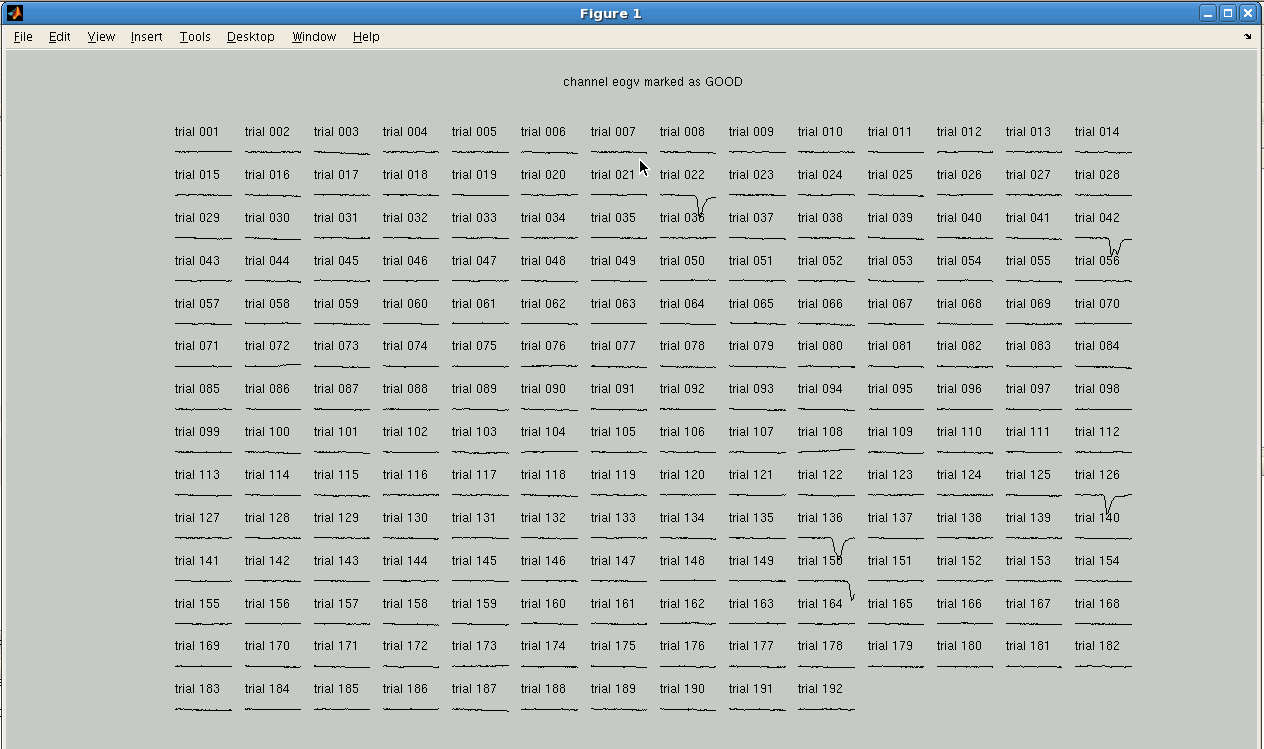 In ft_rejectvisual with cfg.method=’channel’ you can go to channel ‘43’ (note that the channel name is ‘43’ and its number is also 43). There you will see that in trials 138 to 149 this channel is a bit more noisy, suggesting that the electrode contact on this side of the cap was temporarily bad. Neighboring channels also suggest that at trial 138 something happened, perhaps a movement of the electrode cap. We are not going to deal with this now, but it is something that you might want to keep in mind for optional cleaning of the data with ft_componentanalysis and ft_rejectcomponent

The data can be also displayed in a “summary” mode, in which case the variance (or another metric) in each channel and each trial is computed. Close the “channel” mode figure and try the “summary” mode. Note, that a new variable “data_clean” will be created now. 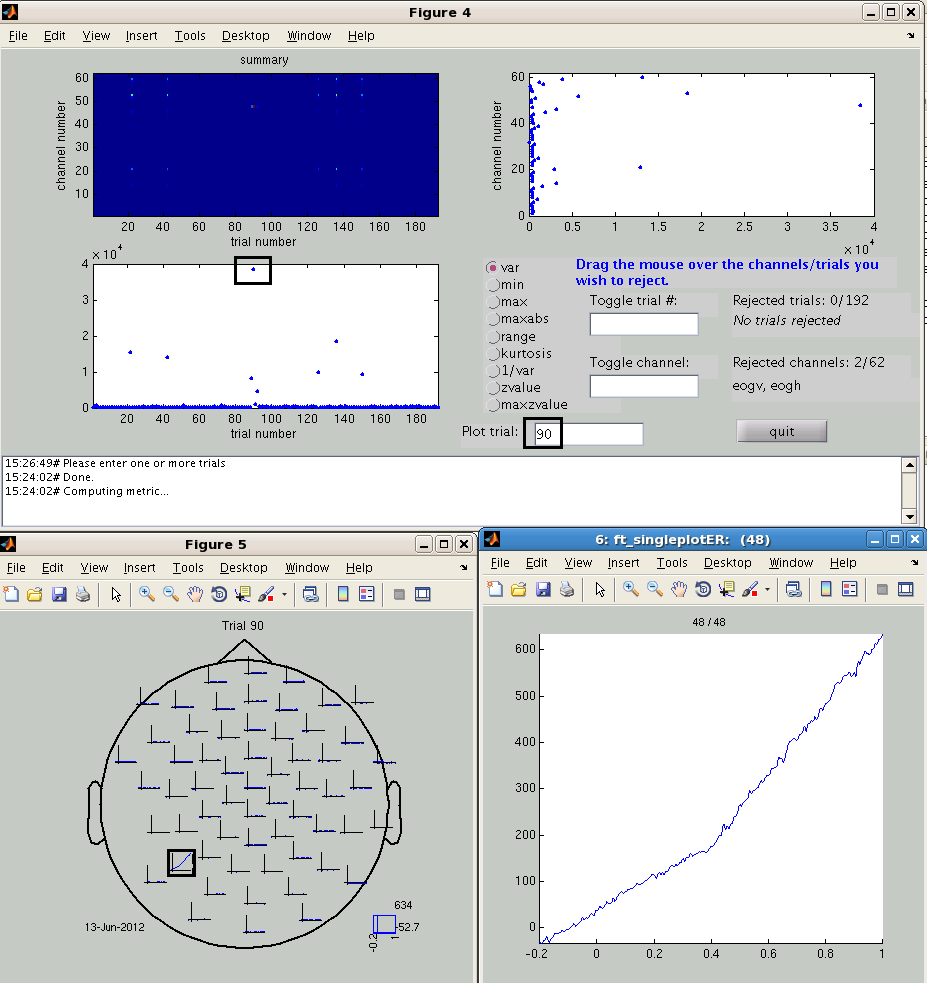 The left lower box of Figure 4 shows the variance of the signal in each trial. By dragging the mouse over the trials in this box you can remove them from the plot and reject them from the data. You will see the numbers of the rejected trials in the box on the right. You can undo the rejection by typing the trial’s number in “Toggle trial” box. You can also plot the signal in a specific trial with “Plot trial” box. Here, we have plotted the trial 90 - the one with the highest variance. On the topoplot you can see drift in channel 48. You can zoom further in to this channel by dragging the mouse over it and clicking.

Rejection of trials based on visual inspection is somewhat arbitrary; it is not always easy to decide if a trial should be rejected or not. In this exercise we suggest that you remove 8 trials with the highest variance (trial numbers 22, 42, 89, 90, 92, 126, 136 and 150). As you see, the trials with blinks that we saw in the “Channel” mode are among them. To complete the rejection press “Quit” button. You get the data_clean variable that will be used for subsequent analyses.

After removing data segments that contain artifacts, you might want to do a last visual inspection of the EEG traces.

Computing and plotting the ERPs

We now would like to compute the ERPs for two conditions: positive-negative judgement and human-animal judgement. For each trial, the condition is assigned by the trialfun that we used in the beginning when defined the trials, this information is kept with the data in data.trialinfo.

We now select the trials with conditions 1 and 2 and compute ERPs.

Note, that we use the layout file for plotting the results. With the cfg.interactive = ‘yes’ option you can select channels and zoom in. 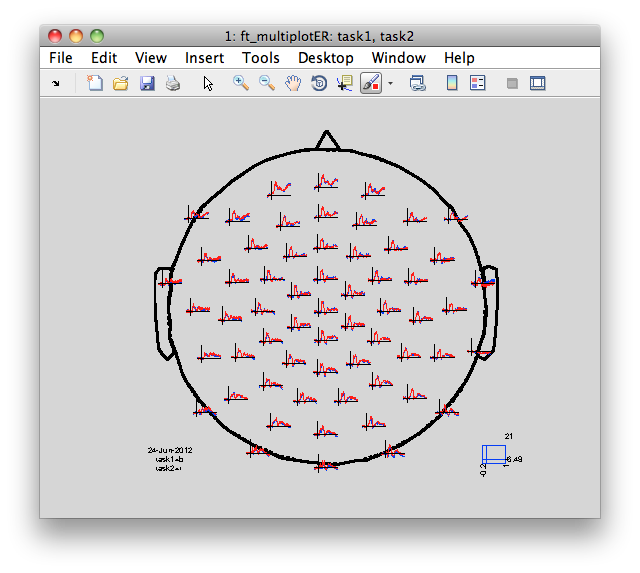 The following code allows you to look at the ERP difference waves.

Explore the event-related potential by dragging boxes around (groups of) sensors and time points in the ‘multiplot’ and the resulting ‘singleplots’ and ‘topoplots’.

Appendix: the trialfun used in this example

After having finished this tutorial on EEG data, you can look at the event-related averaging tutorial for MEG data or continue with the time-frequency analysis tutorial.

If you have more questions about preprocessing or ERP analysis, you can also read the following FAQs:

Or you can also read the examples: