How should you prepare for the workshop?

For the hands on session, we kindly require you to bring a functional laptop with MATLAB and FieldTrip installed. This session will be divided in a theoretical introduction, followed by the practical session, for which we ask you to read the points below:

In the hands-on session we will start with preprocessing structral MRI data, but will not spend too much time on understanding how MATLAB works and how FieldTrip organizes the data. Therefore if you have never done any FieldTrip analysis in MATLAB before, you should read this introduction tutorial. We will start at 9:00 sharp and will finish around 12:00.

Setting up for the hands-on session

Please do NOT use the graphical path management tool from MATLAB. In this hands-on session we’ll manage the path from the command line, but in general you are much better off using the startup.m file than the path GUI.

The restoredefaultpath command clears your path, keeping only the official MATLAB toolboxes. The addpath(pwd) statement adds the present working directory, i.e. the directory containing the FieldTrip main functions. The ft_defaults command ensures that all required subdirectories are added to the path. Setting the spmversion in the global ft_default variable ensures that all FieldTrip functions will use SPM12 rather than an older SPM version which sometimes causes issues with the mex files.

If you get the error “can’t find the command ft_defaults” you should check the present working directory.

After installing FieldTrip to your path, you need to change into the hands-on specific directory, containing the data that is necessary to run the specific hands-on session. These folders are located in C:\FieldTrip_workshop\.

The aim of this tutorial is to create a head model of an adolescent with the numerical method of the Boundary Element Method (BEM), and if as an additional task with the Finite Element Method (FEM). The John E. Richards Lab provided us with an example MRI which consists of the averaged MRI of several 14 year old subjects.

The EEG/MEG signals measured on the scalp do not directly reflect the location of the activated neurons. To reconstruct the location and the time-course or spectral content of a source in the brain, various source-localization methods are available. You can read more about the different methods in review papers suggested here.

The forward solution can be computed when the head model, the sensor positions and the source is given. For distributed source models and for scanning approaches (such as beamforming), the source model is discretizing the brain volume into a volumetric or surface grid. When the forward solution is computed, the lead field matrix (= channels X source points matrix) is calculated for each grid point taking into account the head model and the sensor positions.

A prerequisite of forward modeling is that the geometrical description of all elements (sensor positions, head model and source model) is registered in the same coordination system with the same units. There are different “conventions” how to define a coordinate system, but the precise coordinate system is not relevant, as long as all data is expressed in it consistently (i.e. in the same coordinate system). Here read more about how the different head and mri coordinate systems are defined. The MEG sensors by default are defined relative to anatomical landmarks of the head (the fiducial coils), therefore when the anatomical images are also aligned to these landmarks, the MEG sensors do not need to be re-aligned. EEG data is typically not aligned to the head, therefore, the electrodes have to be re-aligned prior to source-reconstruction (see also this faq and this example).

As already mentioned, the goal of this session is to solve the EEG forward problem, more precisely we want to compute EEG leadfields so that the inverse problem can be solved. In order to compute leadfields, there are 9 main steps that have to be followed. 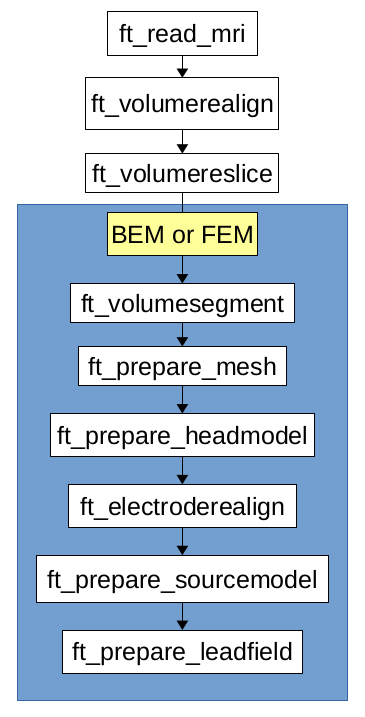 Figure 1: Pipeline for forward computation, in the blue box there are the steps which differ between BEM and FEM

First of all we have to load the data 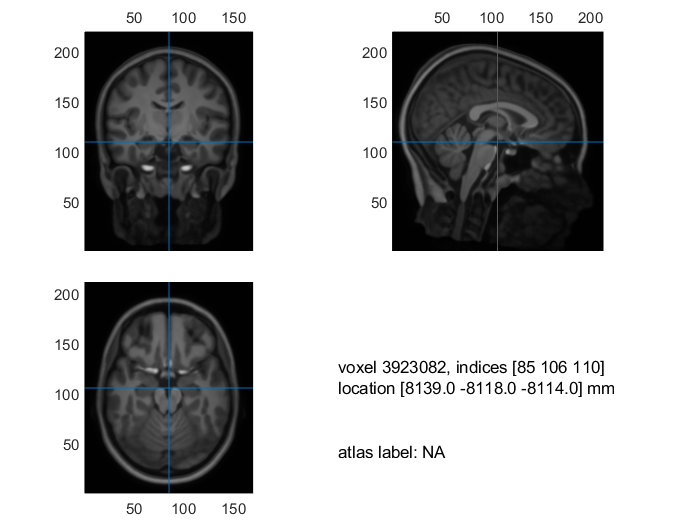 Figure 2: Visualization of the MRI

In this step we will interactively align the MRI to the CTF space. We will be asked to identify the three CTF landmarks + zpoint (nasion, NAS; right pre-auricular point, RPA; left pre-auricular point, LPA) in the MRI. The zpoint is a point in the upper part of the head, it only serves to make sure that coordinate system is not upside down. It is important that all geometrical is expressed in the same coordinate system. This helps for coregistration of these data.

We can visualize the realigned MRI 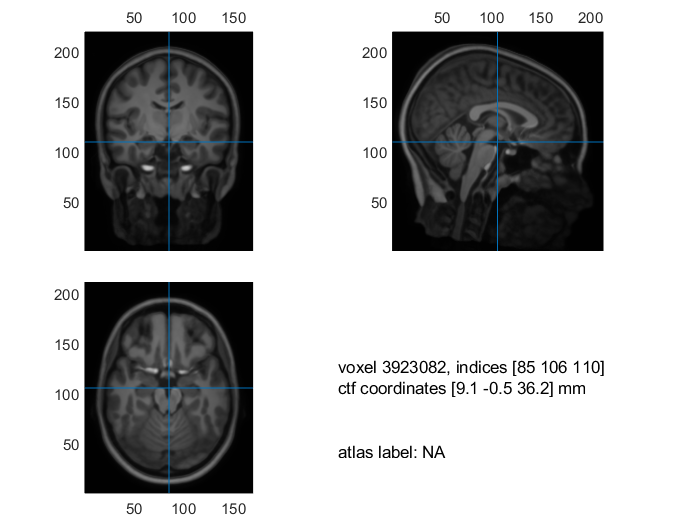 Figure 3: Visualization of the realigned MRI

Before we segment the MRI, we will first reslice the MRI. The reason why is that a segmentation works properly when the voxels of the anatomical images are homogenous.

We can visualize the resliced MRI 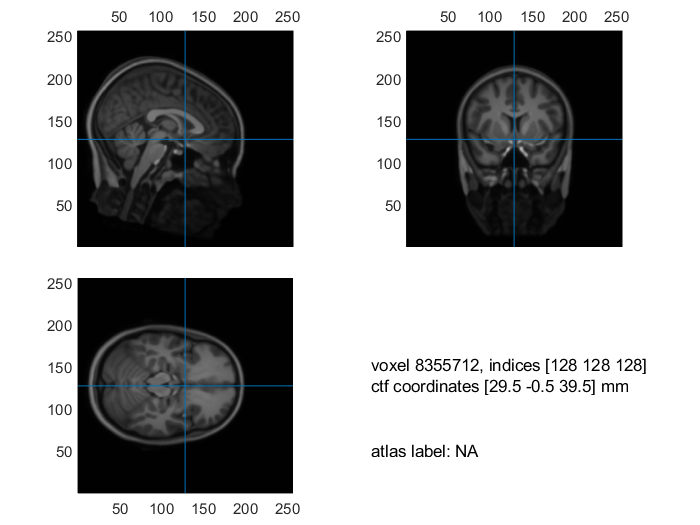 Figure 3: Visualization of the realigned MRI 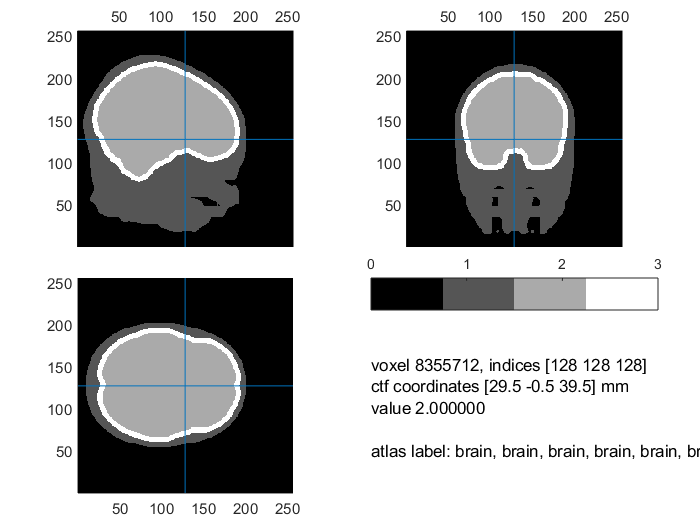 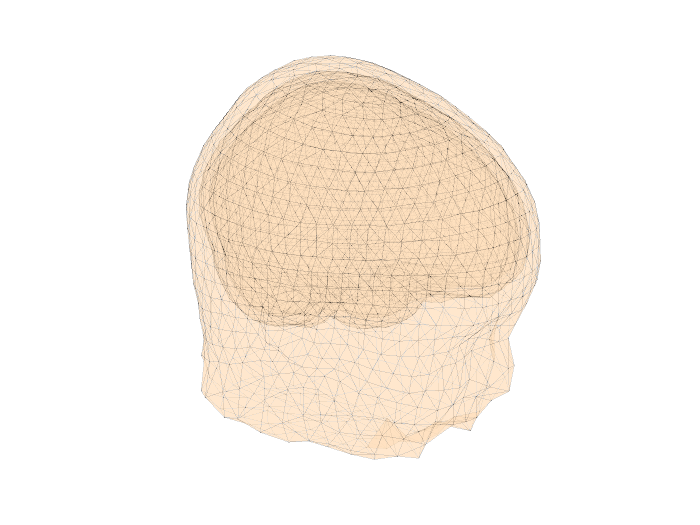 Now we are ready and to create the a head model on the basis of the mesh.

In Windows the method ‘dipoli’ does not work. You can explore other BEM method like ‘bemcp’. If you use ‘bemcp’, the conductivity field has a different order: {‘brain’, ‘skull’, ‘skin’}.

First we have to load a suitable electrode set. For this tutorial we will load a template dataset and transform it in such a way that it will fit the head surface.

And now we will fit it to the head surface. 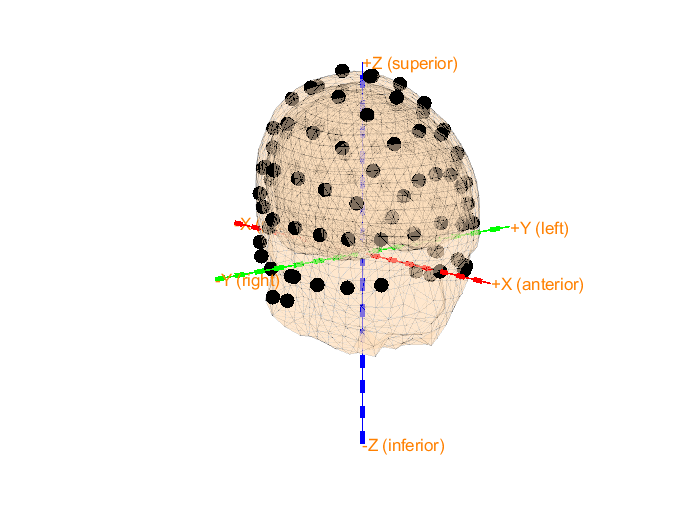 Before we are able to create the leadfields 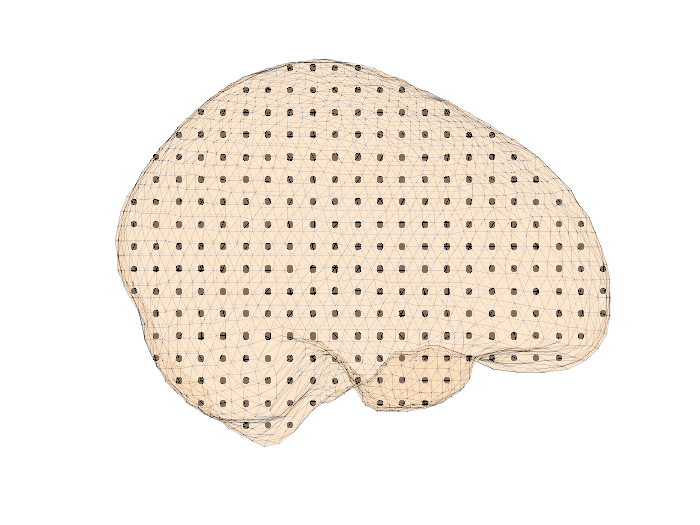 Figure 7: Sourcemodel on the brain compartment

Save the source model

We will now compute the lead field for every source in the source model.

This is the last step for creating a forward model. We could now use the lead fields of each source to do the inverse modeling!

You can also find the segmentation ‘AVG14-0Years3T_segmented_BEM3.mat’ to create a head model. This a segmentation is processed version of a segmentation provided by alongside the MRI in the Neurodevelopmental MRI Database from the John E. Richards Lab. The segmentation was already preprocessed with the Steps 1-4.

This tutorial was about the creation of a volume conduction model on the basis of averaged MRIs of 14 year old subjects, creation of a source model, and computation of the lead fields. This head model could subsequently be used for source level analysis.

Another interesting database to consider for volume conduction modeling for infants is the Pediatric Head Modeling Project.

For acquisition of electrode positions we can also suggest: